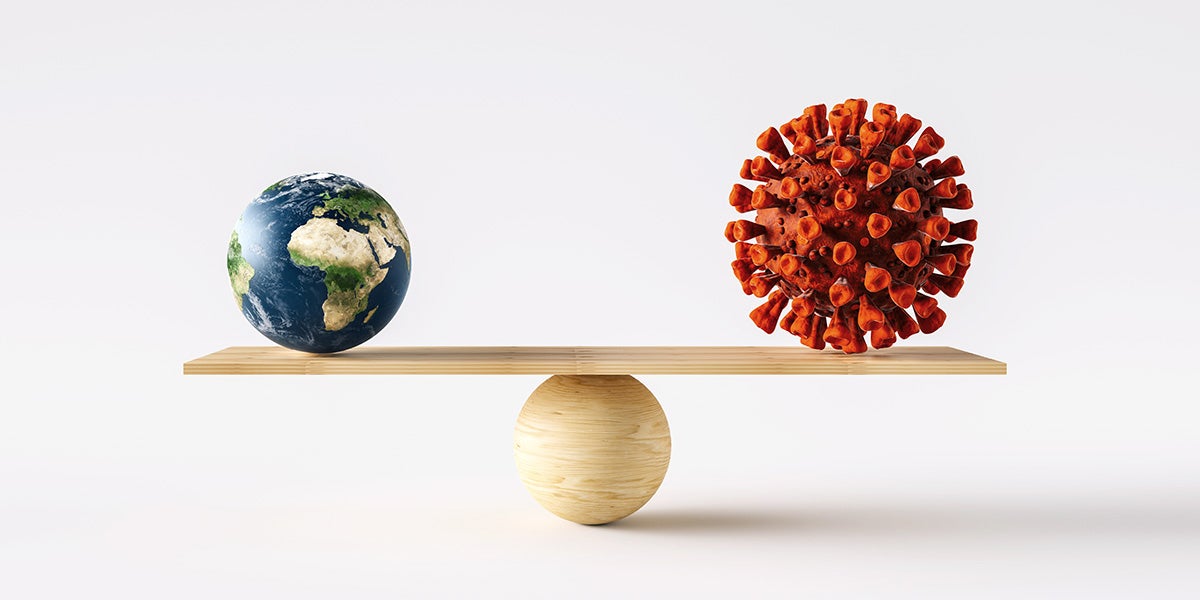 The climate crisis is well underway. If the destruction caused by weather in recent years has devastated tourism, farming, and countless other productive activities, it is but a preamble of far worse impacts in the decades to come if nothing is done to curb climate change. A hotter planet will inflict lower agricultural yields, extensive damage to infrastructure, mass extinctions and increases in disease and death on Latin America and the Caribbean.

Still not enough is being done in the face of this existential crisis. While governments take urgent action to ease the pain of the COVID-19 pandemic with substantial fiscal and liquidity support packages, far less effort has been expended to make economies resilient to climate change and to decarbonize the energy, transport, and agricultural sectors.

The good news, as I discuss in the recently released 2021 Macroeconomic Report, is that there are synergies between pandemic relief and climate mitigation. A sustainable recovery in Latin America and the Caribbean can promote additional growth of more than 1% of GDP, generate 15 million net new jobs and alleviate the hardship on poor and vulnerable households, who tend to be the most exposed and vulnerable to the ravages of COVID-19 and a rapidly warming climate. The key for governments is to prioritize green activities within their COVID-relief spending programs, reform prices and regulations to leverage private finance, align fiscal strategies with the reality of the global energy transition, and ensure a just and inclusive transition.

A crucial step is ensuring that public spending to help firms and households through the pandemic also prioritizes investments in environmentally friendly activities. Public investment could focus on infrastructure that meets sustainability criteria, such as renewable energy, public transport, flood protection, and digitalization, which would include building capacity so that people can continue teleworking and remotely engage with the government. Governments should also help workers affected by the pandemic relocate to sectors that will be part of the transition to a net-zero emissions economy. Countries with the ability to do so should screen pandemic and other stimulus measures for their climate impact and condition support for carbon-intensive firms, such as airlines and energy companies, on their commitment to move towards a carbon-free future.

Crowding-in the Private Sector with Regulatory and Price Reform

To unleash the private sector and ensure that impacts are sustained, public spending should be paired with regulatory reforms. In Chile, the government helped private bus operators to move from diesel-powered vehicles to electrical and climate-friendly ones. The latter require a greater initial investment, which drivers cannot always afford. So the government allowed electricity utilities to own the vehicles and lease them to the bus operators. Reforms of regulations surrounding connections to high-voltage transmission lines and net-metering, among others, can similarly encourage households and utilities to move from a dependence on fossil-fuel energy to renewable energy.

Price reforms will also be needed. On average, countries in the region spend 1% of their GDP on energy subsidies, including for gasoline, diesel and natural gas, a sum that amounted to US$44 billion in 2017. Instead of subsidizing pollution, governments should spend more on direct cash transfers to households most in need, sustainable infrastructure, and public goods such as health and education.

Reforms related to agriculture and forests are key. Much of Costa Rica’s National Decarbonization Plan, which intends to get the country to net-zero greenhouse gas emissions by 2050, involves updating agriculture and livestock practices and leveraging forests and other high-carbon ecosystems to capture carbon. These changes will not hurt the economy; rather they will help it. Increased agricultural yields under the plan, better livestock productivity, and the monetization of ecosystem services, including the sale of renewable forestry products and enhanced tourism, are together expected to bring US$21 billion in net benefits by 2050.

The Problem of Revenue in the Climate Transition

Governments also will have to adjust in the face of changes in their tax bases. Between 2013 and 2018, sales of fossil fuels represented more than 5% of public revenues in Bolivia, Ecuador, Trinidad and Tobago, and Mexico. For other countries, like Uruguay and Costa Rica, gas and diesel taxes make up a significant share of the tax base. As the global energy transition advances, demand for fossil fuels will drop. If the global energy transition proceeds as planned, demand for oil from the region will be down 60% in 2035 compared to pre-COVID levels.

Governments need to identify the fiscal risks associated with a move to different energy sources and develop a strategy to reduce and manage it. This entails delaying or cancelling investments that further dependence on fossil fuels, like natural gas power plants, and replacing revenues from fossil fuel taxes. New or reformed taxes on vehicle ownership and electricity are examples. Value-added taxes are also an option.

Coming Together for a more Sustainable Future

Finally, the transition has to be just and inclusive. Workers have to be protected. While a joint study by the International Labour Organization and the IDB found that countries can create 15 million net new jobs by 2030 in the move to a zero-emissions economy, there will be winners and losers. Employment in coal, diesel, and natural gas-based electricity and generation will fall dramatically just as jobs in plant-based agriculture, renewable electricity, and forestry soar. Workers and communities harmed by the transition will need retraining or compensation, a guarantee of decent working conditions and input into the decisions affecting them.

The demands of the COVID-19 crisis are immediate and critical. But so is the longer-term and potentially more devastating crisis of climate change. Most countries in the region have either officially embraced the goal of carbon neutrality or are said to be working on it. Governments must accelerate their climate plans and design them with inputs from all affected stakeholders. Done right, the transition to a net-zero emissions economy can be win-win, creating jobs and improving economic growth both now and long after the pandemic has passed.