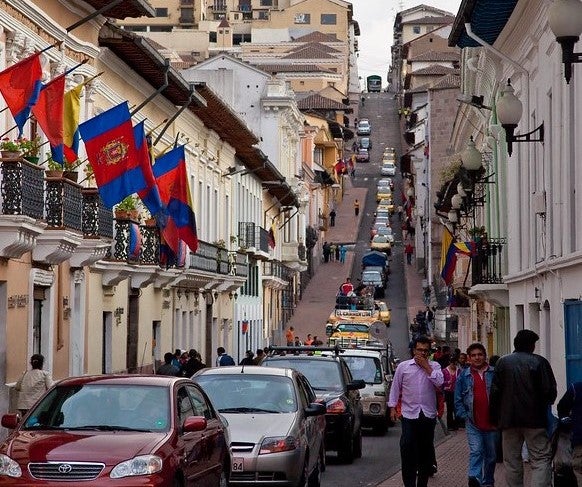 We often hear that the fight against climate change is one of the most urgent priorities for the region. But consider the case of Ecuador. The country is going through fiscal and social difficulties. Can countries like Ecuador attend all three fiscal, social and environmental priorities at once? While it is not an easy task, a recent IDB study suggests that carefully replacing energy subsidies with better social protection spending could be a way for governments to make progress on all three fronts.

Over the last decade, the government of Ecuador has spent as much as 7% of its budget – or US$ 2.3 billion per year – to subsidize gasoline, diesel, electricity and liquefied petroleum gas (LPG). The savings generated from removing fossil fuel subsidies could be used to reduce deficits and sovereign debt, cut other taxes, or fund investments in education, health or infrastructure.

Removing subsidies would also help to reduce the consumption of fossil fuels which contribute to air pollution and represent a big source of greenhouse gas emissions. The IMF estimates that together the social cost of global warming, air pollution, accidents and road damage caused by the over-utilization of subsidized energy in Ecuador is three times greater than the fiscal cost of energy subsidies.

The problem is that reducing fossil fuel subsidies can be politically challenging, as the yellow vest protests in France and the Gasolinazo in Mexico demonstrate.

Indeed, our study shows that poor vulnerable households in Ecuador would be negatively affected by removing energy subsidies. Removing LPG subsidies would cost poor households (defined as those in the bottom 40% of the population) between 2.5% and 3% of their income. Removing subsidies on electricity and diesel would cost them about 2% of their income. Even if they don’t consume diesel directly, poor Ecuadorians are vulnerable to food and public transport price hikes due to removing diesel subsidies. While poorer Ecuadorians do not tend to consume as much gasoline as richer ones since they are much less likely to own a car, removing gasoline subsidies would still cost them 1 to 1.5% of their revenue.

The challenge is therefore getting rid of energy subsidies while protecting poor households. Lessons learned from around the world suggest that one way is to give some of the government savings from subsidy removal back to households. In Ecuador, the Bono de Desarrollo Humano (Human Development Bond) could be a solution. Internationally, cash transfers are one of the best tools to deliver social assistance. They tend to increase health, employment and welfare indicators while being economically efficient. In Ecuador, it costs the government about $2 to disburse $1 to a poor household using the Bono, which is considerably cheaper than energy subsidies.

An increase of the Bono’s disbursements by $46/month would be enough to compensate poor Ecuadorians for the average impact of removing all energy subsidies. In addition, increasing the Bono would cost less than what energy subsidies currently cost, which means that the government would save $1.3 billion per year. This money could be used to reduce the deficit, stimulate the economy, or fund other social development priorities.

And we explore even better ideas. Consider the following deal:

We find these proposals would leave poor Ecuadorians better off economically, compared to the present situation, and would save the government about $1.6 billion per year. Encouragingly, this package could gain traction politically, according to experts we interviewed for the study.

Our paper stems from an academic collaboration between German researchers, Ecuador’s Escuela Politécnica Nacional and the IDB’s Climate Change Division. The study is only as good as the data available, so our results should be interpreted with caution. It also does not cover all aspects that governments should consider before removing subsidies. For instance, we only analyze the impact on consumers, while some firms and workers could also be exposed to the negative impacts of subsidy removal.

Nonetheless, our study demonstrates again that energy subsidies are expensive, inefficient and counterproductive. Reforming them to save money, help poor households, and reduce air pollution and greenhouse gas emissions is a step that all countries at any income level can consider to kickstart a just transition towards inclusive and sustainable development.

Rafael Soria is a specialist in Energy Planning, renewable energy and environment. He graduated as a mechanical engineer at the National Polytechnic School, Quito - Ecuador. He was formed as a Master and Doctor of Science in Energy Planning from the School of Engineering of the Federal University of Rio de Janeiro (COPPE / UFRJ) - Brazil. He completed part of his doctoral studies at the German Aerospace Center (DLR), Institute of Applied Thermodynamics. He is currently an Associate Professor at the Faculty of Mechanical Engineering of the National Polytechnic School, and teaches undergraduate, masters and doctorate classes. His research areas are: Energy Policy, Energy Economics, Energy Efficiency Technologies, Integrated Energy Planning, Energy-Environment and Society, Energy Systems Design, Climate Change Mitigation. It has 14 scientific Q1 publications, book chapters and international conferences. He has participated in consulting teams hired by IADB, Petrobras, EPE, FINEP, British Embassy, GIZ, OLADE, MEER, MAE, Bariloche Foundation, Greenpeace, etc.