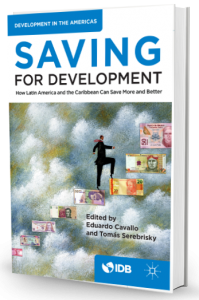 Over the last three decades, Chile has led the way in promoting greater national savings in Latin America and the Caribbean. Beginning in the early 1980s with a pension reform that introduced mandatory savings through a system managed by the private sector, the country has implemented numerous measures that have boosted its savings rate. Privatizations were carried out. Reforms in banking, taxes, and capital markets intended to increase productivity were implemented. And the nation’s saving rate climbed by 11 percentage points between 1985 and 2012, compared to 1960-1984.

So it is only fitting that on June 14 when the IDB launched its 2016 flagship publication Saving for Development: How Latin America and the Caribbean Can Save More and Better, it did so in Chile, a nation that has made great strides toward elevating saving to a national priority. The publication zeroes in on an IDB concern: the looming demographic threat to the region’s future. Within a few decades, the number of people in the labor force will dramatically decline in comparison to the number of non-working dependents.    At the same time, national saving rates are low, and the region is ill-prepared to attend to the health care and retirement needs of what will be a large and growing group of seniors. The publication confronts that predicament by analyzing what the region can do to increase saving at the household, corporate and government level. It examines what is needed to make the financial system more efficient and capable of funding improvements in productivity. And it probes the way in which institutional investors, like pension funds, insurance companies and sovereign wealth funds, might invest in infrastructure projects and boost output and saving. In short, it makes detailed recommendations on how to prepare the region for that inevitable moment when it hits the demographic wall. As a nation that already has considered many of those issues and taken action on some, Chile is an ideal place to start the journey.

Of course, Chile also has a long way to go. The country may have a national saving rate above the 17.5% regional average and a more developed and sophisticated financial sector. But, as discussed by Eduardo Cavallo, a coeditor of the publication in a CNN interview, it lags the region in the percent of its population that uses the financial system to save. It may have pension funds flush with money equalling more than 60% of GDP. But it has yet to sufficiently convert infrastructure into an asset class, or group of securities, able to receive investments from pension funds. These could invest 7% of their portfolios in infrastructure and boost investment in that sector by a striking 4% of GDP. But at present, public and private investment in infrastructure is below the regional average. As long as the instruments are lacking to effectively channel savings towards infrastructure, that sector is likely to continue being shortchanged.

The key in Chile, as in the rest of the region, is creating a virtuous circle in which more savings generate more loanable funds, bigger and more efficient financial systems, a better chanelling of resources, and higher productivity. Those steps would generate higher savings still and the wheel would keep turning, leading to more development with greater social inclusion.

Critically, such steps also would allow the region to save enough to tend to its aging population as the century wanes. Understanding that, and making saving a priority of state policy, as Chile has done, is a necessary beginning.