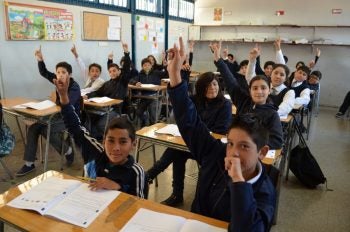 After a historically fierce and bruising battle, Betsy DeVos, a proponent of school choice, was confirmed Feb 7. as the education secretary of the United States. Devos’s supporters applauded her backing of charter schools and vouchers for study in private and religious schools. Opponents argued just as passionately that allowing such options would undermine the public school system.

As far as vouchers are concerned, Chile is an obvious reference point. It began providing students with vouchers (subsidies) to study either in a public or private school in 1981 and has one of the world’s oldest voucher programs. How in reality has its program fared? The issue isn’t so simple.

Chile began implementing vouchers during the dictatorship of Augusto Pinochet under the influence of free-market economists like Milton Friedman, who argued that allowing more choice would introduce a healthy dose of competition into the school system. Schools would become more accountable, and both public education and the private voucher system would benefit.

But results were not promising― at least at first. Chile introduced the voucher program with almost no regulation and without discriminating between rich and poor students, both of whom received the same subsidies. As parents assumed that the private voucher schools were superior, this resulted in a migration away from public schools. Public school enrollment plummeted from 78% of students in 1981 to 39% in 2013. Middle and upper-middle class students abandoned the public school system, and that system became poorer and less diverse.

The shift in school composition had another insidious effect. It reinforced the belief ― or illusion― that private schools were superior. Students in private voucher schools did in fact perform better on standardized tests. However, this was not because the schools were better, but because their students were wealthier, with more educated parents and greater resources; because, in short, they were better prepared. Rules that allowed private voucher schools to charge co-payments and accept or reject students only exacerbated that bias. Yet, these schools did little or nothing to add academic value. Indeed, numerous studies have shown that, when controlling for socioeconomic factors, test results in public and private-voucher schools were virtually indistinguishable.

The picture became more complicated after 2008. In that year, the Chilean government introduced a so-called weighted voucher system in which it paid schools more to educate poorer students. It also implemented accountability measures that forced underperforming private voucher schools to shut down if they did not improve. By increasing funding and quality control, these measures did have an effect. They led to a proliferation of voucher schools in low-income areas of urban Chile and helped poorer students improve their test scores relative to their peers.

These changes―and additional 2015 reforms banning fees and selection of students at private voucher schools― revealed that the voucher system could significantly improve from its unfettered early days. They showed that if rules and government support are in place, and fair admissions and accountability are ensured, a voucher system can enable students from all walks of life to study on equal terms in either a public or a private school, including secular and religious establishments. Still to date, there is no evidence that private voucher schools outperform public ones. Nor is there evidence that competition from private voucher schools has improved the public system.

Chile has done much to boost its educational performance over the last 30 years. Scores on the national SIMCE test, which measures primary and secondary students in reading and math, have steadily risen. The country is the leader in Latin America and the Caribbean on the international PISA exam for 15 year olds. Dropout is low; enrollment in both high school and college have increased. This progress has been linked to a host of reforms, including an extension of the school day, pedagogical support to poorer schools, nutrition programs, regular student assessments, and efforts to make schools more accountable. In that mix, private voucher schools may not rank as significant boosters of educational quality. But they do play a valuable role in providing school choice, and that is important to parents in Chile who tend to prefer private education. A well-regulated and supported voucher system can be an asset. It can empower parents to choose the environment in which they feel most comfortable having their children learn.

Vouchers and related issues will be covered in our upcoming flagship report “Learning Better: Public Policy for Skills Development” to be published by the IDB in mid-2017.