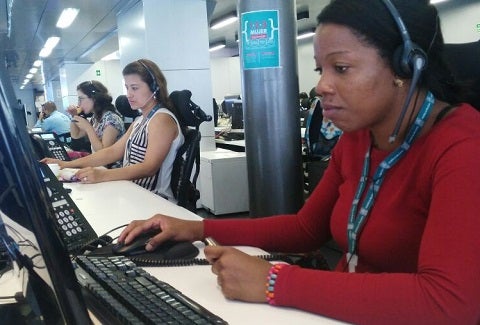 The next time it happened, I called 123 Mujer and I finally felt that the situation would be resolved. The police detained my husband and I got psychological counseling by phone.

They told me that I should press charges and I did. 123 Mujer also provided me transportation to the police station, then picked me up afterward and brought me home.”

This testimony by a 57-year-old woman interviewed for an evaluation of the 123 Mujer hotline demonstrates some of the benefits of the service, offered in Medellin, Colombia by the local police department.

The results of the impact evaluation of the program are included in the Development Effectiveness Overview (DEO) , an annual analysis of programs financed by the Inter-American Development Bank throughout Latin America and the Caribbean.

In Medellin, anyone can call the emergency line to report violence they have suffered or witnessed.

All domestic violence callers receive a full police response before consenting to have their calls passed on to the 123 Mujer team for additional assistance. If the caller wants, and if the situation legally permits it, she may be directed straight to the 123 Mujer team without police intervention.

Almost all countries in the region have such hotlines, which provide a range of services of varying quality and cost administered either by public agencies or nongovernmental organizations.

The 123 Mujer hotline was one of five promising initiatives  in the region assessed by the IDB and a committee of gender experts from the United Nations, the Pan American Health Organization, and the Colombian NGO Profamilia, as one of the ideal candidates to conduct an impact evaluation.

The government of Medellín agreed to facilitate the evaluation, which was financed through an IDB technical cooperation grant.

Colombia’s National Household Demographic Survey conducted in 2010 reported that 71.1 percent of women aged 13 to 49 in Medellin had experienced violence at the hands of an intimate partner, either a  current or former romantic partner.

In response, Medellín’s Secretary for Women created the 123 Mujer hotline in March 2013 to provide timely and more responsive care for survivors of such violence. The goal was to prevent the escalation or repetition of violence and reduce its adverse impact on women, their families, and the community.

The hotline also enabled the local government to collect accurate data on the number of intimate partner violence cases reported to the police. This allowed the city to tailor the hotline to respond more effectively to emergencies.

Initially, the hotline operated only from 7 a.m. to 7 p.m. Monday through Friday. Women who called after hours and left their contact information were called back the following day, but most of those follow-up calls came more than 24 hours after the reported incident. Some return calls were never completed because of difficulty making phone contact.

Increasing demand for assistance eventually led to the introduction of around-the-clock 123 Mujer hotline services in early 2015.

But the two-and-a-half-year window during which the hotline operated on a limited schedule provided an optimal context to evaluate ex-post whether such services could in fact reduce the incidence of intimate partner violence in Medellin and, if so, what would be the most effective way to go about it.

From the 2,100 calls to the hotline between September 2013 and May 2014, the evaluation team randomly selected a sample and divided it into two groups: a treatment group of 459 women who called between 7 a.m. and 7 p.m. Monday through Friday and were attended to immediately or within 12 hours; and a control group of 290 women who called the hotline after hours and were helped 36 hours or more after the initial call or never contacted.

The evaluation found that women in the treatment group reported significant improvements in their situation compared to women in the control group.

Women who received immediate attention or attention within 12 hours were:

The results of this rigorous quantitative evaluation suggest that providing prompt assistance to survivors of intimate partner violence improves their ability to take positive steps to liberate themselves from violent situations before that violence escalates to its severest and deadliest forms.

The window for helping women suffering from domestic violence attacks is brief, and once it closes, the potential benefits of the hotline intervention quickly diminish.

The results thus support introducing adequately staffed and around-the-clock emergency hotlines in conjunction with police services to assist survivors of intimate partner violence, rather than stand-alone services with limited hours.

Adria Natalia Armbrister is a social development specialist in the Gender and Diversity Division in the IDB office in Lima, Peru.