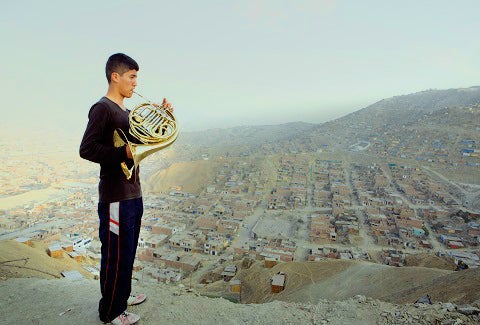 In 2011, the Symphony Association of Peru, presided over by renowned Peruvian tenor Juan Diego Flórez, launched the “Symphony for Peru: Music and Social Inclusion” project with support from the Inter-American Development Bank (IDB).

A social intervention inspired by the successful Youth and Child Orchestras of Venezuela.

The project established four musical centers in four very different areas in Peru: the marginalized, urban ghettos of Trujillo (coastal), Huancayo (mountain), Huánuco (rainforest), and Manchay-Lima (desert). Each center brings music to almost 200 children and adolescents living at or below the poverty level.

In addition to providing musical equipment and qualified instructors, the centers also developed a new methodology of music instruction that differs from the traditional pedagogy.

Rather than learning individual pieces, students participate in group ensembles, beginning with the pre-orchestral phase (symphonic and big band).

In addition, the Symphony Foundation of Peru developed an expansion strategy in which strategic partners will support and sustain the musical centers when the IDB‘s funding ends after two years.

Everyone believed that the project would have a positive impact on the nearly 800 beneficiaries. To verify this rigorously, a random selection process was used.

This method is not commonly used by the Symphony Association of Peru when evaluating other centers, which are not funded by the IDB.

However, this method was indispensable for experimental measurement, as it provided homogenous intervention groups (participating students) and control groups (nonparticipants).

The sampling consisted of 401 children from the musical center in Huánuco and 405 from Manchay. (Because of budget restrictions, only these two of the four musical centers were evaluated.)

The students’ test results from cognitive and socio-emotional tests were supplemented with interviews with the Center’s directors, instructors, and heads of household.

Girls like Norka can testify as to how the program has influenced their lives. Norka is from Manchay, on the outskirts of the capital, Lima, where many families settled after having been displaced by terrorism.

Norka now has a safe place where she can learn her favorite instrument, the violin.

More importantly, children like her have a place where they can cultivate values like responsibility, discipline, and teamwork. This setting helps build their self-esteem, encourages them to have goals in life and to achieve those goals, promotes improved school performance, strengthens family ties, and facilitates positive involvement in their community.

The evaluation shows that the project has a positive impact on students’ performance in school, their personal development, and in their homes.

Their average conduct rating at school increased, and was 5 percent higher than the control group. Specifically, the children reduced verbal and physical aggression by 29 percent when compared to the control group.

Families also reported that they feel more pride in their sons and daughters. There is also evidence that the project helps reduce the prevalence and intensity of child labor.

Clearly, the benefits have gone well beyond music. The program succeeded in transforming the lives of Peruvian children living in poverty.

These are some of the posts of the series:
– Lessons from Honduras’ CTT program: conditionalities matter
– Opening the English world for native Spanish speakers