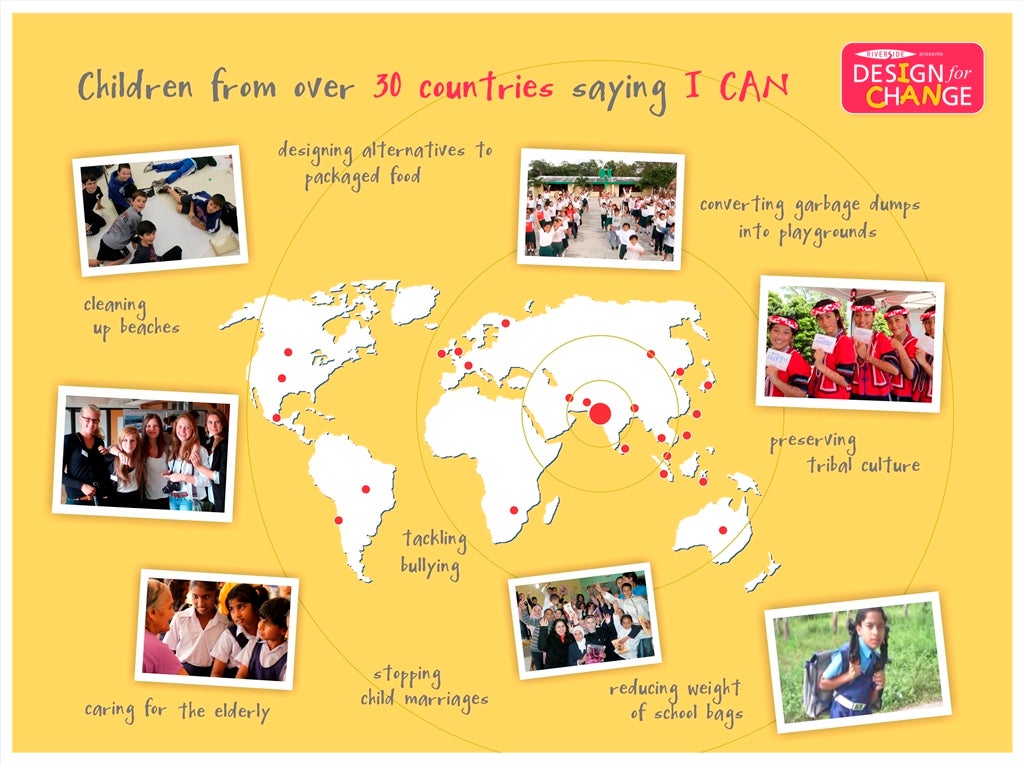 It is surprising that those who try to resolve basic but important social problems often lack the knowledge of how to scale up the solution found to a problem. Fortunately we are now witnessing the rise of new social movements that try to simplify and disseminate this kind of knowledge in the hope that solutions will snowball, reaching and being applied by more and more people.

One such movement is Design for Change, which began with the idea of instilling children with the spirit of ‘I CAN’ by teaching them Design Thinking as an approach to imagining and designing a better world.

The project started when the Riverside School in Ahmedabad, India designed a toolkit with four steps – Feel, Imagine, Do and Share – which they made available in more than 17 languages free of charge to schools right across India. Children at participating schools took part in a challenge in which they designed and implemented solutions to problems which bothered them in their school or community. In the first year alone, children led more than 700 stories of change in both cities and villages. Over the last five years, the toolkit has been rolled out right around the world and to date more than 10,000 inspiring stories have been collected from all corners of the world.

Children have used this knowledge and spread the word in their own communities, so the process of empowerment keeps on snowballing. For example, in 2009, a group of 10 year olds in Rajasthan India got the people in their village together to carry out some simple and effective ideas for harvesting rainwater. And, in 2012, on the other side of the world, some 13 year olds at the Emiliano Zapata Middle School, in Mexico, decided that their school needed a civic square. They succeeded in uniting the entire Los Timbres community to build it with them.

In each of these cases, children were addressing issues that directly bothered them. No longer was their idea small and insignificant. Empathy became an important lens through which children saw their world. In the last five years, DFC has spread to more than 30 countries and 400,000 children, who have led more than 650 awareness campaigns, saved more than 480,000 liters of water, set up more than 100 libraries, built 750 restrooms in villages and taught 1,900 adults to read and write.

Every year DFC gathers together I CAN success stories from around the world and puts them on the DFC website where everyone can access them. These stories inspire people and provide them with real examples of change that they can replicate in their own communities. The content on the DFC website is free for everyone to use and put into action wherever they are in the world. Thanks to the phenomenal participation by children across the globe, DFC has been able to demystify the process of design thinking so that we all can learn from, replicate and build on to effect change in our own communities. It is a movement that asks all of us to be empathetic and to have the courage to turn that empathy into action.

Do you know other examples of these stories taking place in Latin America and the Caribbean?