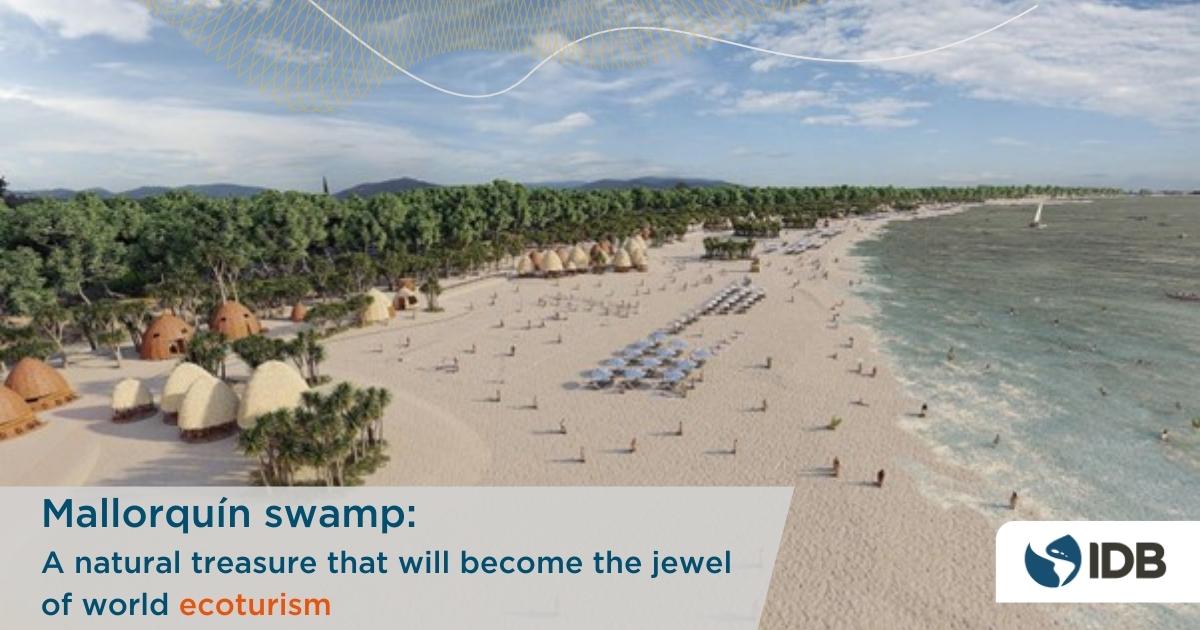 Barranquilla, also known as the happy city, is one of the main tourist destinations in the region for its joy, music, gastronomy, and culture. However, very soon it will also be known worldwide for a new tourist attraction: the Mallorquín swamp.

In this blog post, we explain how the IDB’s Housing and Urban Development Division, in line with the climate change mitigation and adaptation objectives of its Vision 2025, supports the recovery of this unique natural urban space. This will also help position Barranquilla as the first biodivercity in Colombia. Do you want to know how? Keep reading so you don’t miss any details.

The IDB supports Barranquilla in its commitment to urban biodiversity

Colombia is the second most biodiverse country in the world and, at the same time, 77.1% of its population lives in urban areas. The Government of Colombia, aware of the importance of cities in mitigating and adapting to the effects of climate change, seeks to transform its cities into biodivercities. But, what is a biodivercity? Biodivercities are urban spaces where nature is part of sustainable urban development, which helps to solve the main environmental, social, and economic problems.

The city of Barranquilla has been working for some time on the sustainable recovery of its natural spaces. Already in 2013, the Inter-American Development Bank (IDB), in its commitment to urban development in the region, recognized Barranquilla as a sustainable and competitive city. A few years later, in 2019, thanks to the commitment of local and national administrations, the happy city was selected to be the first biodivercity in the National Program of Biodivercities of the Ministry of Environment and Sustainable Development.

Last year, Barranquilla, with the support of the IDB’s Housing and Urban Development Division, began one of the most important works that will mark a before and after in the city, such as the comprehensive recovery of the Mallorquín swamp.

Why is the recovery of the Mallorquín swamp so important?

The Mallorquín swamp is a coastal lagoon located in Barranquilla, on the left bank of the mouth of the Magdalena River, in the Caribbean Sea. It has a very rich ecosystem, housing four of the five types of mangroves considered unique ecosystems worthy of conservation in the country and serving as a habitat for more than 36 species of fish.

Mangroves are the perfect buffer against hurricanes and storms. They protect coastal communities and also serve as a barrier against the impacts of climate change. However, worldwide, the loss of this ecosystem is more frequent than imagined. According to the Food and Agriculture Organization (FAO), the planet has lost more than 25% of its mangroves. During the last decades of the last century, some Latin American and Caribbean (LAC) countries lost between 25% and 70% of mangrove cover.

The importance of preserving this type of ecosystem for a city like Barranquilla goes beyond the economic and urban spheres. Below, we present some of the reasons why it is necessary to preserve the endemic ecosystems of our cities:

The Ciénaga de Mallorquín Ecopark, a jewel for world ecotourism

The Mallorquín swamp recovery project is divided into three phases:

The construction is being carried out in the most sustainable and environmentally friendly way possible. For example, wood has been chosen as one of the main materials to create its paths. It is a renewable, natural, biodegradable, non-toxic material that does not generate a negative impact on the landscape and that, considering the environmental conditions, will have a high durability. These trails are stilt houses, so they do not impede the passage of the species of flora and fauna that inhabit the area.

These characteristics make the project even more attractive: how, from the artisanal, a city becomes the first biodivercity in Colombia. However, the project also encompasses challenges. Some of them are the following:

The Mallorquín swamp will position Barranquilla and Colombia as one of the main destinations for world ecotourism. Activities such as bird watching or enjoying a unique ecosystem where river and sea converge make this space a jewel for nature lovers. Nor should it be forgotten that this eco-park will generate many jobs and local investments. In addition, its mangroves will protect Barranquilla and other coastal communities against the impacts of climate change.

At the IDB, we will continue to improve the lives of the inhabitants of the cities of our region by supporting projects such as the Mallorquín swamp eco-park. If you don’t want to miss any blog post, webinar, or publication from the IDB’s Housing and Urban Development Division, we encourage you to subscribe to our newsletter here.

Jason Anthony Hobbs is an urban planner and operational specialist with over 17 years of experience working on issues of sustainable development in the Latin America and Caribbean Region. As a Housing and Urban Development Senior Specialist, he advises policy makers and city leaders on urban issues relating to infrastructure, mobility, rehabilitation, upgrading, regeneration and public spaces. He joined the IDB through the Young Professional Program (YPP). Prior to joining the IDB, he worked for the World Bank, non-profits and the public sector on the design and implementation of operations, monitoring and evaluation initiatives, and provision of technical and operational support for projects, country assistance strategies and policy dialogue. An advocate of placemaking and human-scale cities, he is fluent in Portuguese, Spanish and English. He holds a M.A. in Sustainable International Development from the Heller School for Social Policy and Management at Brandeis University, and a B.A. in Political Science from the University of Maryland Baltimore County.