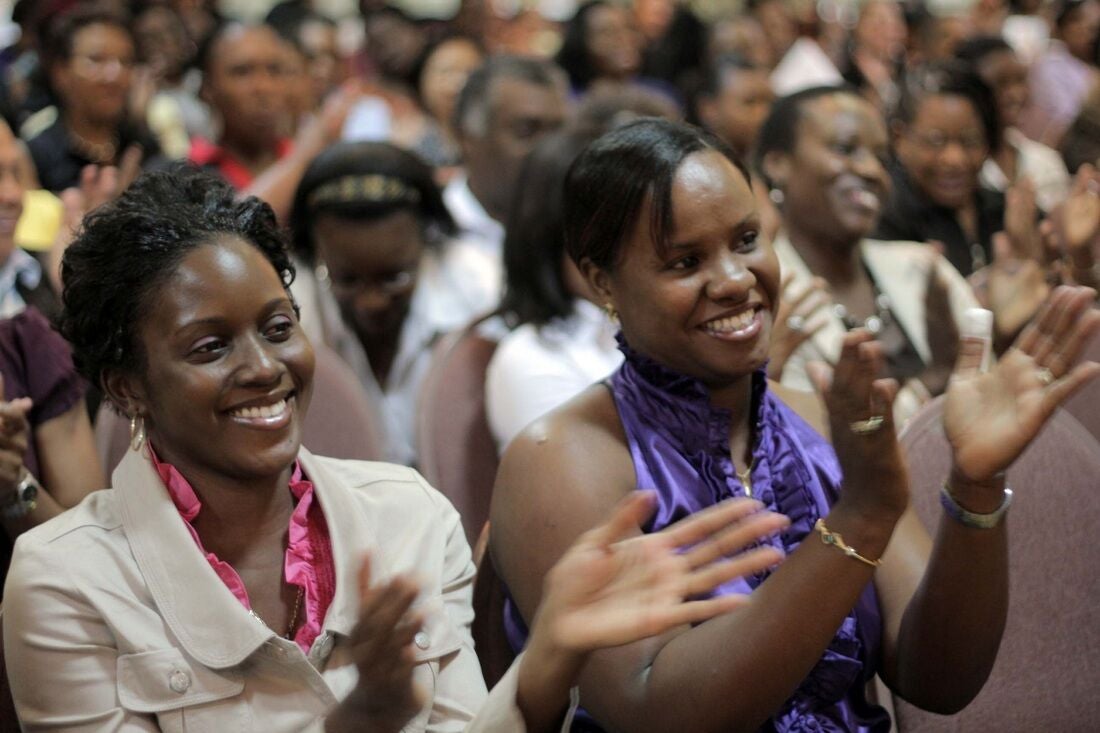 By Janette Archer-Headley and Michelle Daniel

The use of gender mainstreaming to promote equality and empowerment is one of the Inter-American Development Bank (IDB) Barbados Country Office’s cross-cutting themes in its 2015-2018 strategy. This requires a certain focus be given to gender perspectives across all activities, not only at the country level, but at an organizational level as well.

With this in mind, IDB Barbados staff welcomed the opportunity to join organizations around the world to celebrate International Women’s Day (IWD) under the 2017 theme of #BeBoldForChange.  An audience of over 50 persons were invited to a multimedia presentation and empowerment session at the IDB offices in Christ Church which included students from The Foundation School and The Deighton Griffith Secondary School, Civil Society members, and IDB staff.

This year’s theme was celebrated with a range of ideas and examples of women who were deprived, abused or overlooked, yet were courageously able to overcome their situation. Told through personal stories, videos, and an original skit choreographed and performed by IDB employees, one of the main messages highlighted was the benefit of women having a strong support system.

Using the inspiring experience of one seasoned finance executive, the challenges of women working in male-dominated areas were also explored, as well as the multidimensional roles of the female as a mother, wife and sometimes both a mother and father. The importance of female executives having both male and female mentors was also discussed in order to assist women to navigate the proverbial ‘glass ceiling’.

The skit performed by Bank employees entitled ‘Woman…Rise Up’ also explored the topic of domestic abuse through the eyes of an educated, professional woman, living under the threat of harassment and violence at the hands of her husband. Whilst not always the case, she survived and was able to conquer her situation. A reality that pervades many homes across the globe, the story highlighted the importance of knowing one’s sources of strength, resources e.g. counselling services and the importance of timing i.e. when to take action.

Three videos additionally showcased the multicultural stories of women from two Latin American countries (Brazil and Colombia) and the Caribbean (Jamaica). The IDB funded project in the Colombian town of Apartado was used as an example of how women were leading the way in their communities against the odds and playing a key role in development projects. Closer to home in Jamaica was the story of a single mother who was an ex-gang member with three children. This woman was able to transform her life and become a mentor in her community to help others escape this lifestyle through another IDB project, ‘The Citizen Security and Justice Program’.

Another example used was that of Brazil who, in March 2015, became the 16th Latin American country with a “Femicide Act” mandating harsher punishment when women die as a result of domestic violence, gender discrimination, or ‘contempt for’ women. As a result, a video entitled, Can Graffiti Stop Domestic Violence? is now used nationally in Brazil as a response against violence. It shows one woman’s experience of domestic violence at the hands of her husband which led her to learn about her rights and the possibilities of using graffiti as an art form to speak out against domestic violence.

The pervasive message from the IWD session was clear – know your support systems and become aware of relevant national legislation.  And, that in fact, transforming a woman can transform a whole community!

Janette Archer-Headley is a certified Project Management Professional and is an Operations Senior Associate currently working with the IDB in Barbados. In this role, she monitors the execution of several loans and technical co-operation covering various thematic areas within the portfolio of the Bank. Prior to joining the IDB, she was employed with UNWomen and the United Nations Development Program in various roles. Janette worked in the areas of Procurement, Project Monitoring, and Finance for Barbados and the OECS countries. She holds a Bachelor’s degree in Management Studies and a Master’s in Project Management and Evaluation from the University of the West Indies. She earned her MBA from the University of Leicester, and a diploma in Strategic Management and Leadership from the Chartered Management Institute (CMI).