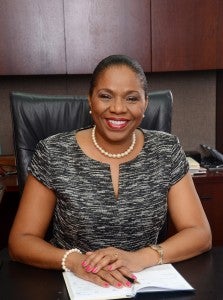 A Caribbean bank leader highlights her experience promoting gender equality both inside and out. Maureen Hayden-Cater, President of Jamaica’s First Global Bank, visited the IDB Group to participate in our speaker series “Promoting Women Leaders in the Private Sector.” The initiative is part of the IDB Group Private Sector’s goal to showcase women leaders in the region and strengthen diversity and gender equality. Before her keynote speech, which will be followed by a question and answer session with IDB Group staff, I reached out to First Global’s President to learn more about what women and leadership mean to her.

Can you describe a woman leader in your life and the role that she played?

The woman leader who inspired me most was my mother, Beryl Hayden.  She worked outside of home, but she was never absent during my growing years.  I grew up in a small rural community. My dad was a farmer, and my mother ran a variety store. While my role model was close to home, the strength of her example in visioning a world of possibilities was just as powerful as if she were on a world stage. My mother showed me the importance of financial independence, the empowering spirit of work and the fulfillment that comes with balancing your work with your family.

What does gender equality mean to you?

Gender equality happens when women and men have access to the same opportunities to be successful. The total absence of gender bias continues to be elusive. But my own daughters, Milan and Mikayla, will find the wall lower than I did, and lower still than my mother did.

We cannot forget that in many parts of the world gender equality has no meaning whatsoever, and in fact, gender oppression is legitimized legally and socially. But even the most enlightened among us should consider how masculinity and femininity define the expectations we hold for ourselves.

How does gender play a role in your current position as President of First Global Bank?

I am leading the Bank at the very best time of my life to do so. I certainly would not have been prepared to assume such a position, nor been interested, 20 years ago because other things were important to me at the time. Things like balancing work and raising my daughters. Where I am in life today is more informed by my experiences of harmonizing the traditional female gender role with that of the revised definition of leadership.

What, if any, activities does First Global Bank carry out in terms of gender operationally?

First Global is an organization with a strong vision for the empowerment of women. We understand the social challenges faced by women and developed several financial products which, while not exclusively for women, are certainly geared towards the traditional responsibilities of women in the Jamaican context. Such products include:

Maureen Hayden-Cater has been President of First Global Bank Limited since 2010.  She leads First Global Bank’s strategy to become Jamaica’s leading technology-driven bank. A career banker, Mrs. Hayden Cater worked for many years at Citibank, where she held several senior positions. Mrs. Hayden-Cater is the President of the Jamaica Bankers’ Association and aims to foster collaboration with the government, regulators and consumers with a view to facilitating economic growth while maintaining a stable and sound banking system. A graduate of the University of the West Indies, Mona, Mrs. Hayden-Cater holds a Master of Science degree in Economics, specializing in Quantitative Economics and Econometrics, and a Bachelor of Arts degree in Economics and Mathematics. Fluent in Spanish, Mrs. Hayden-Cater lives in Kingston, where she is an active member of her church.