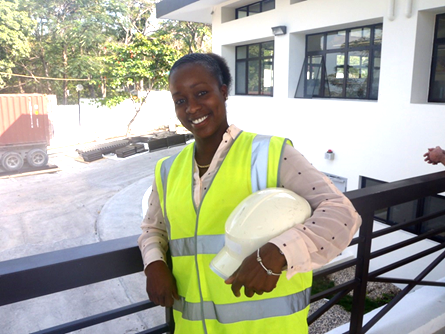 Like both my parents, I am an engineer by profession. I was born and grew up in Haiti where I attended an all-girls catholic school.  I was exposed to the world of construction from a very early age, either at my mother’s office where, as an architect, she would draw large blueprints for commercial buildings and houses, or on our occasional visits to actual construction sites, where I even got to carefully climb ladders.

My father, also an engineer, held us to very high standards.  I remember that when I would go to him for help with my math homework, the first thing he would say is “Of course you can do that if you followed the teacher in class!” He expected me and my sister to excel at math just as much as my brother.  And we did!  The result was that I was always comfortable with numbers and science subjects in general.  So much so that upon completing high school I went to college in New York State, where I majored in civil engineering and earned a Master’s degree in construction management.

My second job after college was with a consulting firm in Long Island, NY, where I was assigned to do inspections at various highway construction projects.  This felt a little bit awkward at times.  I can recall walking onto a jobsite with dozens of middle-aged males, New Yorkers, to validate quantities and ensure technical specifications were respected on the worksite.  Too frequently, the men would approach me, rather puzzled, asking whether I was the “flag girl,” to which I responded, “No, I am the engineer.”  At first I was offended both by the question and by their surprise, but I thought better of it, noting that it wasn’t personal.  They just didn’t have much experience with women engineers.  I really didn’t give it much thought.  I went on working in the field for three years.

Although my father had passed away in 2004, my mother was still in Port au Prince, working as an architect.  After the earthquake in 2010, I decided it was time to return to my homeland, and with great excitement I joined the Inter-American Development Bank in July 2011, to work in Haiti as a transport specialist.  As it turned out, one of my very first projects had to do with a training program promoting equality between men and women on construction sites.  The project was aimed at training women to do work which was traditionally considered “men’s” work, e.g., operating heavy equipment and small maintenance works.

At the conclusion of the program, I was invited to attend the closing ceremony where certificates would be issued to the women.  The testimonies were quite moving.  It struck me how often I heard the women remark on how proud they were to have done the unthinkable!  One woman commented that she had never even driven a car before joining the program, and now she was driving a backhoe.  I appreciated the comments of the men, many admitting that they were surprised by how quickly the women learned, and also how some even outperformed their male counterparts.

I am proud of and love my portfolio, which revolves around the construction of transport infrastructures, including the past years financing of over 100 kilometers of primary road rehabilitation, HIMO urban paving projects around various cities in the country, engineering studies to continue to improve road rehabilitation, and other important improvements and modernizations at the countries’ major airports and seaports.  The fact that I am a woman doesn’t enter into those equations – my role models made sure I never considered my gender a handicap.  But through this experience, I’ve come to appreciate the work the Bank is doing around gender issues in a world and a country where that is the exception and not the rule.  I strongly believe that Haiti’s future depends on the ability of our country to help people achieve their fullest potential.  For me, that also means honoring what my parents taught me growing up, that both men and women are capable.  With the proper investment in human capital and education, men and women are equally suited to thrive, to reap opportunities, and to deliver results in every sector.  That’s the Haiti I am working for!