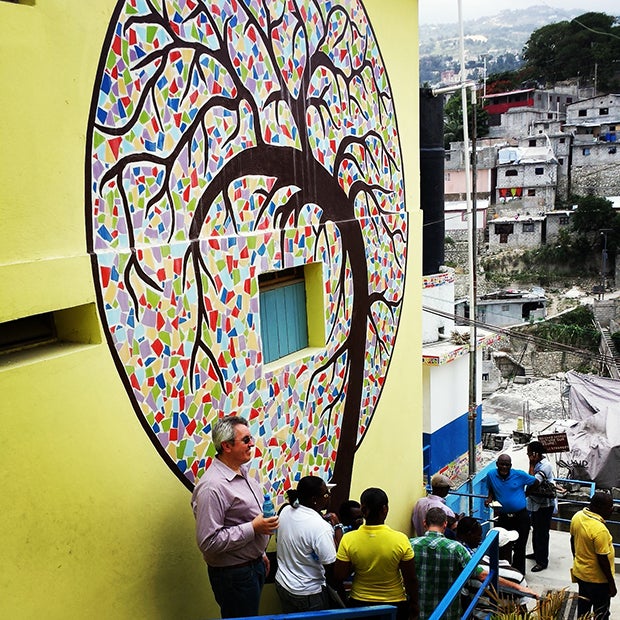 A cloud of smoke billowed from downtown Port-au-Prince. News quickly spread that the dwellings of 1,500 families had been demolished by the Haitian government—some with only 24 hours’ notice—to make way for municipality buildings. Families once displaced by the 2012 earthquake now found themselves once again digging through rubble to salvage a few remaining family heirlooms.

This painful scenario demonstrated that Haiti needed a tailored training course now more than ever. With reconstruction efforts fully underway, the IDB’s total financial commitment in Haiti from 2011 to 2015 is expected to reach US$1,044 million. Many of the projects in these sectors require careful resettlement of people both in the densely populated capital of Port-au-Prince and in other cities throughout the country. Over the past four years, the IDB has worked closely with the Haitian authorities on 15 projects that have involved resettlement and/or compensating displaced people in Haiti. With that experience in hand, the IDB was well positioned to work with stakeholders to improve their resettlement capabilities.

In the summer of 2014, the IDB and the World Bank drew more than 50 applications for a two-week resettlement training course for government officials and nongovernmental partners in Haiti. The final 38 participants chosen represented over 20 agencies working on various projects involving resettlement and complex social issues throughout the country. To ensure that the realities and challenges of working in Haiti were fully considered, 28 of the 40 training sessions were taught by local experts. The course included lectures, group exercises, field visits, and case studies.

During the two weeks, the course participants found perhaps the greatest resonance in the contrast between the displacement happening in downtown Port-au-Prince and the best practices being taught in the training.

“The course is vitally important for Haiti,” said Harry Adam, the Executive Director of the Unit for Construction, Housing, and Public Buildings (UCLBP) in Haiti, “There was a lot of methodology that came out of the course that the Haitian government needs to now validate and incorporate into our system of governance. It’s important for us to take the leadership on resettlement issues, not just for the post-quake reconstruction, but to prepare for other disasters to come, like hurricanes and flooding, and to prevent another situation like what happened downtown.”

The course provided participants with tools based on international best practices, like IDB’s OP-710, which outlines the importance of consulting beneficiaries and using resettlement as a tool to improve the livelihoods of people though the prevention of impoverishment and (re)building communities… The course also intentionally looked at Haiti in the larger context of Latin America and the Caribbean, drawing parallels to places such as Colombia, the country with the largest number of displaced people in the Western Hemisphere. Like Haiti’s current policy, Colombia once only provided cash payments to resettlement people, payments that often fell short of their needs. Applying international standards and frameworks to fill the gaps in national legislation, Colombia developed a framework that now provides additional assistance for resettled people. This could provide Haiti with a model for future legislation.

Local universities and government agencies in Haiti are already discussing how to integrate the course into a permanent study program such as a certification program  with the initial support of the IDB and the World Bank. Participants also formed a Community of Practice to share knowledge and provide inputs into one another’s resettlement projects.  On this anniversary of the earthquake, Haiti has the unique opportunity to take the lessons of the past and use them to shape its future for the betterment of all of its citizens.

Read more about how the IDB and Haitian government worked together to address resettlement challenges in a road project Haiti in the forthcoming IDB Sustainability Report.

France Francois is a Haitian-American social specialist at the Environmental Safeguards Unit of the IDB, with over 5 years of experience working with displaced people in post-conflict and post-disaster environments. Reach out on twitter @FranceF3.