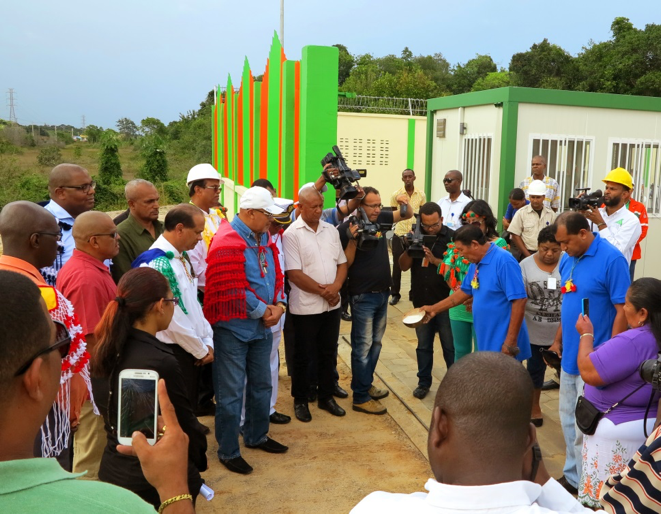 For decades, a high-voltage transmission line has passed through the Amerindian village of Powakka, located in the district of Para in Suriname, without benefiting the community. The 161kV transmission line transports to Paramaribo the electricity generated by the Afobaka Hydropower Plant, historically the country’s main source of electricity. However, the village never had a 24-hour formal electricity supply service until December 2016. As part of the rural electrification component of the IDB program to improve the sustainability of electricity service, Powakka was officially connected to the power grid in December 2016. More than 250 households in the community will now enjoy the same quality standards of power supply that exist in the capital. In a second phase, expected to be completed by early 2017, the surrounding villages of Carolina, Ayo, Pierre Kondre, Redi Doti and Cassipora will also be connected to the grid, thus increasing the total number of beneficiaries to more than 600 households.

The program was approved in November 2013 for a total amount of US$ 30 million and is being executed by the local power utility N.V. Energie Bedrijven Suriname (EBS). The operation contributes to the sustainability of the power sector by financing: the implementation of Supervisory Control and Data Acquisition (SCADA), Enterprise Resource Planning (ERP) and Geographic Information System (GIS) platforms to strengthen EBS’ operational procedures and corporate performance; rural electrification interventions in the interior of Suriname; and the upgrade of specific infrastructure critical for the proper functioning of the grid.

The President of the Republic of Suriname Desiré Delano Bouterse, ministers, government officials and local traditional authorities attended the opening ceremony for the program on December 21st.

Audience during the opening ceremony (top), and the President giving his opening speech (bottom)

Powakka, Carolina, Ayo, Pierre Kondre, Redi Doti and Cassipora are located 50km south of Paramaribo and are easily accessible by road. Black water creeks and white savannah sands make this area a popular destination for recreational purposes. Several resorts offer swimming areas and facilities that attract citizens from Paramaribo and tourists taking weekend trips. In addition to tourism, agriculture is another important source of income for the region, and the pineapples are one of its distinctive products. The villages currently have access to an informal power supply via small diesel generators. However, in the best case scenario, power is limited to only a few hours per day, which unfortunately is the common situation of most villages in the interior of Suriname.

Overview of the project

The project has a US$ 7.5 million budget and includes the retrofit of the southernmost EBS substation located at Paranam, the installation of a new 16km overhead transmission line at 33kV between Paranam and Powakka, the construction of a new substation at Powakka along Afobakkaweg road, and the upgrade of the existing distribution system to supply the villages with 36km of 12kV distribution lines. Once completed, the beneficiary communities will be connected to the Paramaribo Electricity System (EPAR), the power grid that serves Paramaribo and surrounding areas. EBS designed the concrete poles used for the transmission line and they were manufactured locally. The project also includes the extension of the EBS fiber optic network in order to allow the remote operation of substations from Paramaribo via SCADA.

This represents an important milestone for the development of the region and follows the completion of the new Carolina Bridge, an important infrastructure project that links both sides of the Suriname River. The rural electrification project will have a positive socio-economic impact on the area by providing more reliable electricity service. In order to assess the impact of the formal power supply on beneficiary households and villages, the project includes an extensive Impact Evaluation that will measure the average impact of the project on a variety of outcomes related to consumption, income, households business performance, agriculture, subjective welfare, health, time use, wealth, and migration. This information will be very valuable for future rural electrification projects in the country.