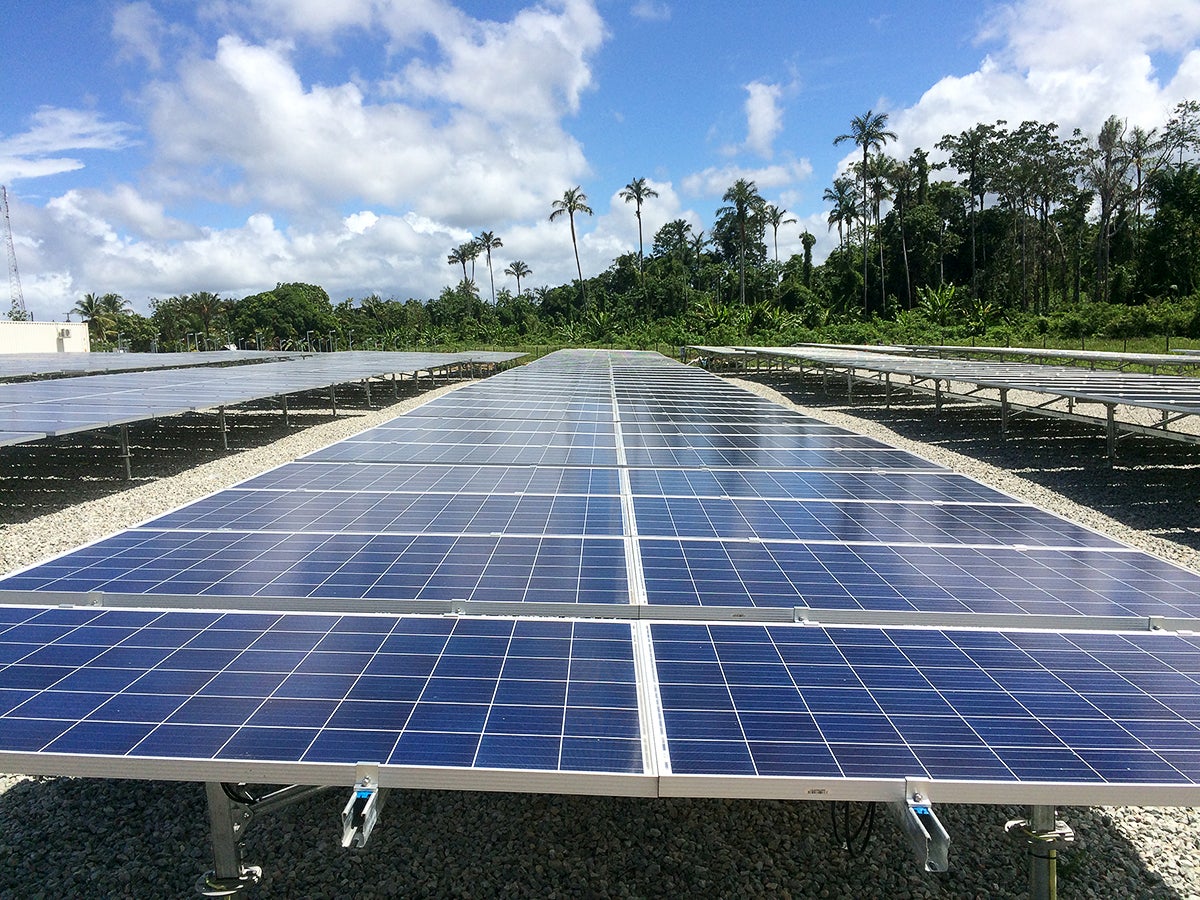 By Jordi Abadal and Javier Cuervo

Last January, Suriname inaugurated the first solar plant for rural electrification purposes. The plant, with a capacity of 500 kW, will provide 24 hours electricity to the rural community of Pokigron and to Atjoni under the operational responsibility of EBS, the state-owned electric utility of Suriname, and with financing from the Inter-American Development Bank (IDB).

Pokigron is a remote rural community from Paramaribo, the capital from Suriname. Atjoni is a harbor next to Pokigron, created to transport goods and people to the communities located in the Upper Suriname River.  It takes three hours by car through a well-maintained road, surrounded by a tropical forest landscape. It is a road with little traffic of vehicles but frequently used by trucks transporting large woodlots. Traveling to Pokigron and Atjoni, you will see multiple indigenous communities composed of few houses, most of them built with traditional materials like wood or palm leaves for the roofs. Most of these communities do not have electricity or running water and they have a very traditional lifestyle, mainly based on agriculture, hunting, and fishing.

It is estimated that 10% of Suriname’s population lives in rural communities (54,000 Maroons and 8,000 Amerindians. The majority are Maroons, descendants from African slaves who escaped into the interior of the country from the sugar cane fields, creating different independent tribes (Saramacca, Paramaccaa, Ndyuka, Kwinti, Aluku, and Matawai).

Pokigron, inhabited by Saramacca, is the last community accessible by road in the district of Sipaliwini, which covers most of the interior and the virgin forest of the country. Between Atjoni and Pokigron there are about 400 homes. These two locations share several facilities, including a primary school, a secondary school, a clinic and several supermarkets, which also serve the communities located in the Upper Suriname River. Every day dozens of boats leave to more than 50 communities located along the Upper Suriname River. It is estimated that around 15,000 Saramaccans live in these communities, only accessible by boat. Atjoni is, therefore, a communications and service hub for all these communities, which will also benefit from the project.

Until the inauguration of the solar plant, the electricity in these two communities was supplied by a pair of diesel generators of 700 kW capacity, which operated with great limitations, supplying electricity between 4 to 6 hours a day in the best case. The electricity was supplied with no charges to customers, which affected the quality of the service in a vicious circle. It is estimated that in Suriname there are another 135 indigenous communities in the same situation. The economic recession that affected the country during the last years resulted in irregular supply to the communities and generated an important expense for the government. In this context, the inaugurated plant responds to one of the main priorities of the government of Suriname: promotion of renewable energies, mainly solar and mini-hydraulic, to supply 24 hours emission-free electricity in isolated rural communities, which also contributes to the economic and social development of these isolated communities.

The new solar plant, consisting of 1680 solar panels of 300 Wp and a group of 8 battery banks with a capacity of 1000 Ah each, will operate in a hybrid mode with the diesel generators as backup. The system prioritizes the charge of batteries during the day to have reserves at night, with the objective of minimizing the overall consumption of diesel. Electricity is distributed through a distribution network that has been upgraded to reduce losses. The total cost of the plant was US$ 2.5 million, resulting from a competitive process and with full financing from an IDB loan to the government of Suriname.

The project does not end with the installation of the solar plant. During 2018 it is planned to install smart meters with pre-payment option in the households and equipment to facilitate billing to customers.

One of the main challenges of implementing this projects in a country like Suriname is to understand and respect the social and cultural aspects of the local population, which differ among the different tribes. To ensure the success and acceptance of the project by the community, communication between EBS and the traditional leader of the community (Captain) has been a decisive factor.

The plant in Pokigron is the largest isolated solar plant in Suriname that will operate with a hybrid backup system. This is a milestone for the country and marks the way for future solar plants for rural electrification purposes. The IDB and the government of Suriname maintain a persistent dialogue to continue expanding this type of experiences using renewable energy sources to improve life quality in rural communities.

Javier Cuervo is a leading energy specialist with 18 years of professional experience at the IDB. He is currently in charge of the IDB’s portfolio of energy projects in Suriname, where he provides investment funding and technical assistance in support of energy reforms. In addition, Mr. Cuervo is the voice for “access to safe and sustainable energy”, an initiative that promotes energy development of a UN-led SE4ALL initiative. In his previous professional experience, he worked in the private sector, the Government of Colombia and academia. Mr. Cuervo has an Electrical Engineering degree from the University of Los Andes in Colombia and a postgraduate degree in Resource Economics from the University of Maryland at College Park.