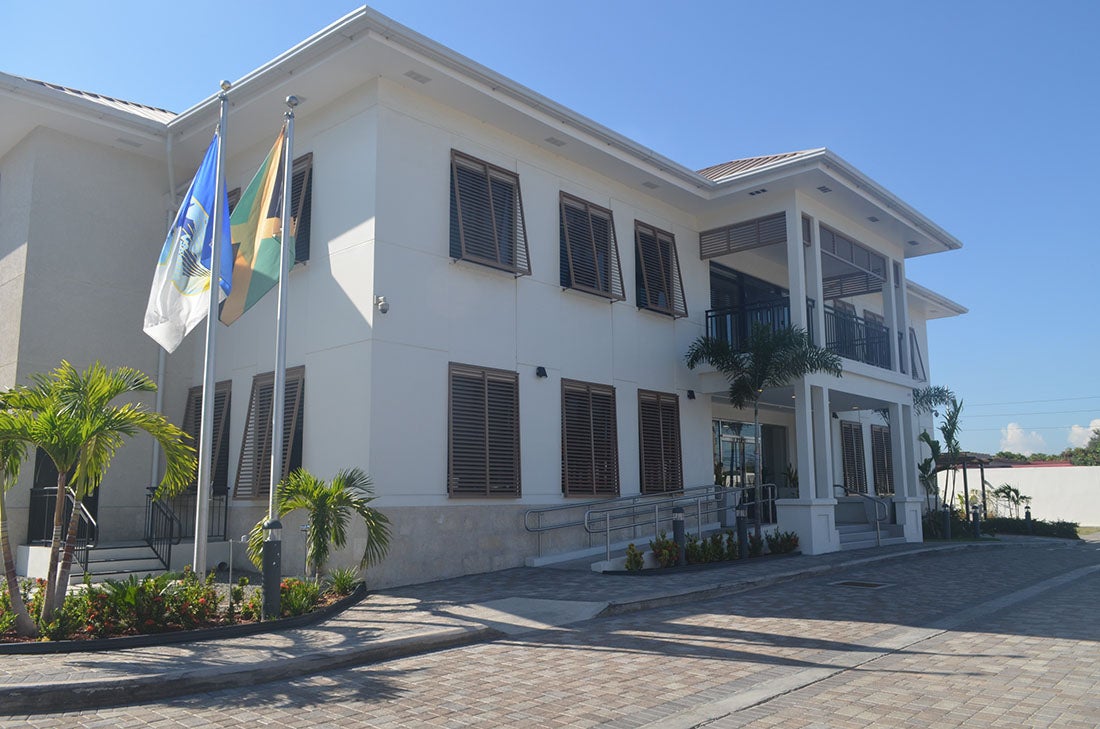 This year marks Jamaica’s 57th Anniversary of Independence. It will also mark a half-century of IDB support for the government and people of Jamaica as the country’s foremost multilateral partner. Few, if any countries, at any level of income or development have accomplished as much, as quickly as Jamaica, and in keeping with our mandate to improve lives, the IDB is proud of our contribution to this success. The IDB looks forward to continued support for the people of Jamaica on the road towards faster and more inclusive economic growth, development, and poverty reduction.

Jamaica’s remarkable journey… Jamaica’s progress towards institutional development in recent years has been nothing short of remarkable. Over the past decade, Jamaica went from being one of the most indebted and economically uncertain countries in the world, to the poster child for policy prudence and institutional innovation. With the help of international development partners like the IDB, Jamaica has come further, faster, than anyone thought possible!

What’s left to be done? Though much has been achieved, the heavy lifting is far from over. For example, completing the monumental task of transforming Jamaica’s public sector into a more modern, efficient, and responsive group of agencies will require many more years of effort and external support. The IDB looks forward to remaining the country’s closest partner in the years to come, and our country strategy is fully aligned with the Government’s own development agenda. It aims to tackle constraints on economic growth and contribute to poverty reduction, with a focus on three overarching objectives: (i) improving public sector management; (ii) increasing productivity and growth; and, (iii) reinforcing human capital development. This strategy also fully integrates crime, resilience to climate shocks, and gender equality as cross-cutting areas.

Current support envelope. The IDB is currently providing support to the people of Jamaica in a multitude of areas, as reflected by a portfolio of over US$730 million in financial support (end-2018), including for infrastructure and basic services, healthcare, citizen security and justice, social protection, financial sector development and inclusion, skills development, and—importantly—public sector transformation (see figure, below). We view public sector modernization and reform as one of the key pillars of our work with Jamaica, and as an area where much remains to be done. 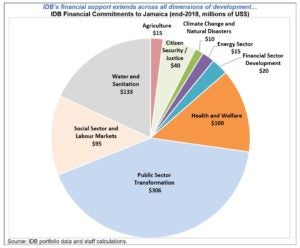 Key Priority: Public Sector Transformation. Our ongoing partnership with the government of Jamaica has focused on nearly every aspect of public sector transformation. One example is the Public Sector Efficiency Program (PSEP), that began in 2013, and has been co-funded by the IDB, the European Union, and the Government of China. This program has achieved significant results, including digitalization of Jamaica’s business registration process, which has helped Jamaica move up considerably on the World Bank’s “Doing Business” rankings—so much so, that Jamaica was named one of the “10 Most Improved Economies” on this ranking in 2016. Other significant achievements under the PSEP include revamping Jamaica’s public procurement system, and laying the foundations for adopting a ‘shared services’ model for key government functions. These and other initiatives will save the public millions of dollars each year, and ensure more efficient and effective service delivery. The PSEP’s successor—the Public Sector Transformation Program—will build on this success.

IDB Support for Institutional Reforms: Independent Fiscal Council. One of the PSEP’s most significant achievements has been its crucial support for the development of Jamaica’s fiscal institutional reforms, including the forthcoming independent fiscal council. The IDB has made some of the world’s foremost experts in the design of fiscal institutions—among them, Canada’s InfoCivitas Ltd., along with our own internal expertise—available to the Government in support of its efforts to ensure that Jamaica’s fiscal architecture will be modern, effective, and up to the task of ensuring that the hard-won fiscal and economic gains of the past several years are sustained. See a recent blog post and IDB paper entitled “Fiscal Councils: Evidence, Common Features, and Lessons for the Caribbean” (Nov. 2018), published on this subject. This advice and support—along with input from other development partners, industry stakeholders, academics, and civil society—will ensure that public and market confidence in Jamaica’s core institutions will remain strong, particularly after Jamaica’s successful graduation from the ongoing IMF-supported adjustment programme later this year. The IDB looks forward to remaining the Government’s foremost partner in this endeavor, and to ensuring its successful implementation over the coming years.

On the horizon… The IDB looks forward to continuing the work that has begun in a number of areas, including the Government’s efforts to transform Jamaica’s public sector into a cutting-edge digital entity, that is more efficient, responsive, and effective than ever before. In this and a multitude of other areas, the IDB stands proudly by Jamaica, and looks forward to many more years of close and productive partnership.