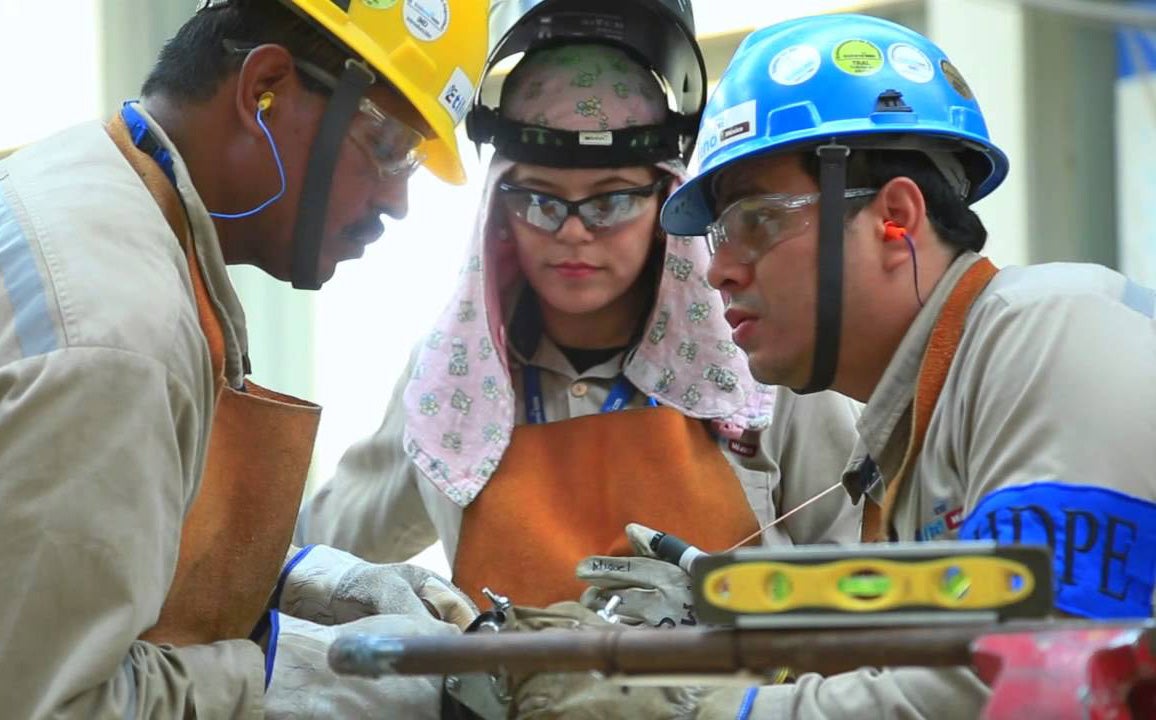 In spite of advancement in women’s participation in many sectors, globally “the share of women in construction industry has remained shockingly low for decades -– under 3 percent”[1]. Women are considered to be disruptive to an “all-male” workforce and have to confront cultural stereotypes, sexual harassment, and life –balance challenges. However, with a large portion of development resources in Latin America invested in financing infrastructure construction, the Bank is actively promoting gender-inclusive policies for women to participate and benefit from the development process, in all stages, including the construction industry. The Bank’s financing of the largest petrochemical plant in Latin America provides a showcase for a new paradigm: that women’s employment can become an important source of competitive advantage for businesses.

The Etileno XXI Project, approved in 2012, is located near the city of Coatzacoalcos, Mexico, a region that contains approximately 85% of the country’s petrochemical industry. During the initial due-diligence phase, the Bank identified several risks to success of the project. To mitigate these risks, the Bank required the Project to commit to strong engagement with the local communities, including 1) priority to local hiring; and 2) increasing women participation in the construction workforce.

By the end of 2015, Etileno XXI’s unskilled workforce was comprised of 20% women, while 4% occupied positions considered “skilled labor”. Although it has room to improve, these numbers represent a boon over the nation averages of both Mexico (where women make up about 3.5%[2] of the construction industry) and the United States (9%[3]). Three initiatives were fundamental to this achievement:

The Company worked simultaneously on two key elements: education that supported women’s inclusion in the construction site and changes in the recruiting language to emphasize equal opportunities for men and women. As a result, in spite of the traditional doubts among the Mexican construction industry about women’s abilities, of all the people trained, 17% were women. Furthermore, 94.3% of women also passed a key certification exam, the ICATVER, a government training institute for the State of Veracruz, compared to 91.9% of men.

The “construction helper” job category, traditionally linked to unskilled men, attracted a large amount of unskilled women, who found it a good entry point into the construction industry. 42% of women’s overall employment in the Project was in the construction helper job category. In more specialized positions, such as civil and mechanical work, fewer women applied, but 48% of those who applied were hired, compared to 43% of the men. In total, 90% of the people trained were hired by the Project — 92.9% women, versus 89.7% men. In the security forces for physical and asset security, traditionally male-dominated positions, these are currently 25% women.

The Project also focused heavily in providing training opportunities for women to grow and develop new skills, particularly technical and safety skills. In non-traditional roles, such as “foremen,” women’s participation grew from none in 2013 to 8 in 2015. As part of this initiative, 24 women were trained as Technical Instructor, and five became certified as Crane’s Engineer and Operator, a significant step for women in construction.

The capacity building program also enabled women to increasingly benefit from promotions: from 5% of the 2013 promotions to more than the double in 2015 (11%). In one case, a female supervisor will be the only one retained by the Company until the end of construction, having been chosen over her male colleagues based on her performance.

As women entered the Project’s workforce, it was necessary to address traditional behaviors of gender-based violence, sexual harassment, work-life balance difficulties, and doubts about women’s physical resilience. With the support of IDB and IFC, the Etileno XXI Project once more stepped up to the challenge by:

The local hiring program, combined with these inclusive policies and empowerment programs, was very effective in gaining the support and acceptance of the surrounding communities, allowing the Project to proceed without any significant labor and union challenges. The impacts of the gender-inclusive policies and initiatives went beyond the construction site and were instrumental in helping women overcome barriers and gender-based stereotypes in the surrounding communities.