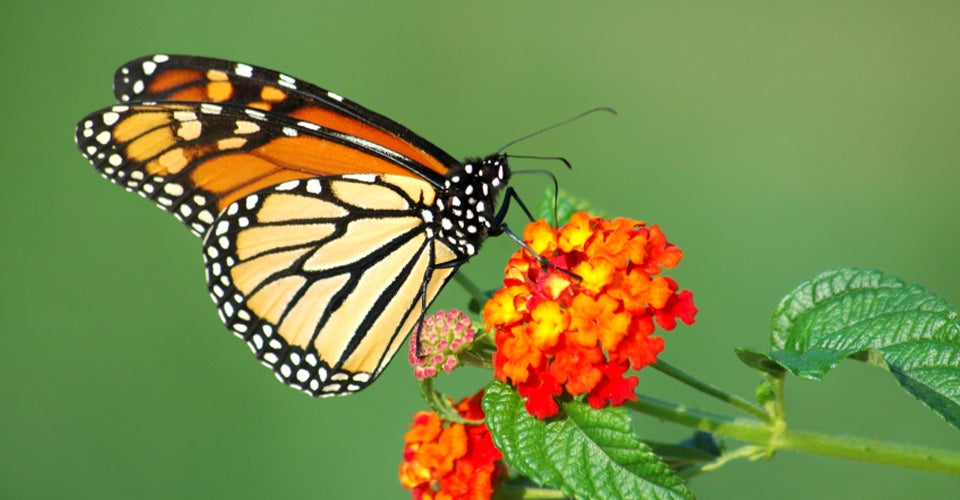 “We used to see so many more butterflies around Port au Prince” said Adolphe—our dispatch manager— one day last year when he saw me crouching over a plant in IDB’s new Port au Prince office garden, admiring a Monarch butterfly that had recently arrived in Haiti from North America on its remarkable annual migration.

It was a casual observation but it got me thinking about what had changed—why the numbers of butterflies had declined so. The following week I met with our landscaper and together we walked around our 3,500 m2 garden to look at the plants growing there. The garden is very neat with lots of mowed green grass and quite a few trees, but as we walked and talked, I learned that this otherwise attractive looking garden was in fact full of exotic (introduced) species which do not provide any food for caterpillars and butterflies.

Of course, it’s not just the butterflies and other insects who find little to snack on in the garden. The lack of native flowers, fruits and berries, also means that the garden is not visited by any of the beautiful humming birds or colourful migratory warblers native to Haiti. I realized that we were missing an opportunity: instead of planting exotic species—introduced from other regions like South America and even Africa and Southeast Asia—we could instead contribute to reestablishing the natural habitat that Haiti’s butterflies and birds need to thrive AND have a more attractive garden where IDB staff and visitors could admire the native plants of the island.

Butterflies, bees, other insects and hummingbirds also play a crucial role in pollinating plants, including agricultural crops, so they are critical to food security. Plants that depend on pollinators make up 35 percent of global crop production volume with a value of as much as $577 billion a year. The agricultural system, for which pollinators play a key role, creates millions of jobs worldwide[1]. So it’s not just about aesthetics!

Over time people everywhere, not only in Haiti, have brought in exotic species to their gardens because they are, well… exotic! They look different which makes them interesting, for example, they might have large showy flowers. Commercial landscapers and properties might bring in exotics that are easy to propagate, cheap to produce and maintain. The consequence however, has been the gradual loss of the natural character of places, and the impacts are more widespread than one’s garden, especially if the plants are not only exotic, but “invasive”. Invasive plant species are those which escape the gardens where they were originally planted and establish themselves in places where they are not wanted, and in fact cause harm. There are many cases where invasive plants have displaced natives and disastrously transformed landscapes, making them uninhabitable for native species. Islands, where natives have evolved in isolation, are particularly vulnerable to invasive species. In the Caribbean, examples of invasives include the climber or japanese honeysuckle and the ornamental tree Roble blanco. These and many other invasive species take over large areas, resulting in the loss of habitat for some of the world’s most vulnerable endemic species of plants, insects and birds.

Fortunately, the Green Commission in the Bank’s Haiti office quickly recognized the opportunity to contribute to conserving Haiti’s unique biodiversity. We recently completed the first phase of establishing a native plant garden. Working with the Cayes Botanical Garden, we have planted hundreds of native trees and plants of several different species. Over the next few years, they will convert the remainder of our garden to native species.  This is likely to be the first native garden in Haiti, and will not be drab and uninteresting, but a cacophony of colour and beauty and a show case of the amazing biodiversity native to the country.

In the IDBs Haiti Country Office we are very excited to be contributing to the restoration of Haiti’s rich natural flora and eagerly look forward to seeing the return of more butterflies in the years ahead.

By Andy Drumm (with contributions from Rachel Atkinson)