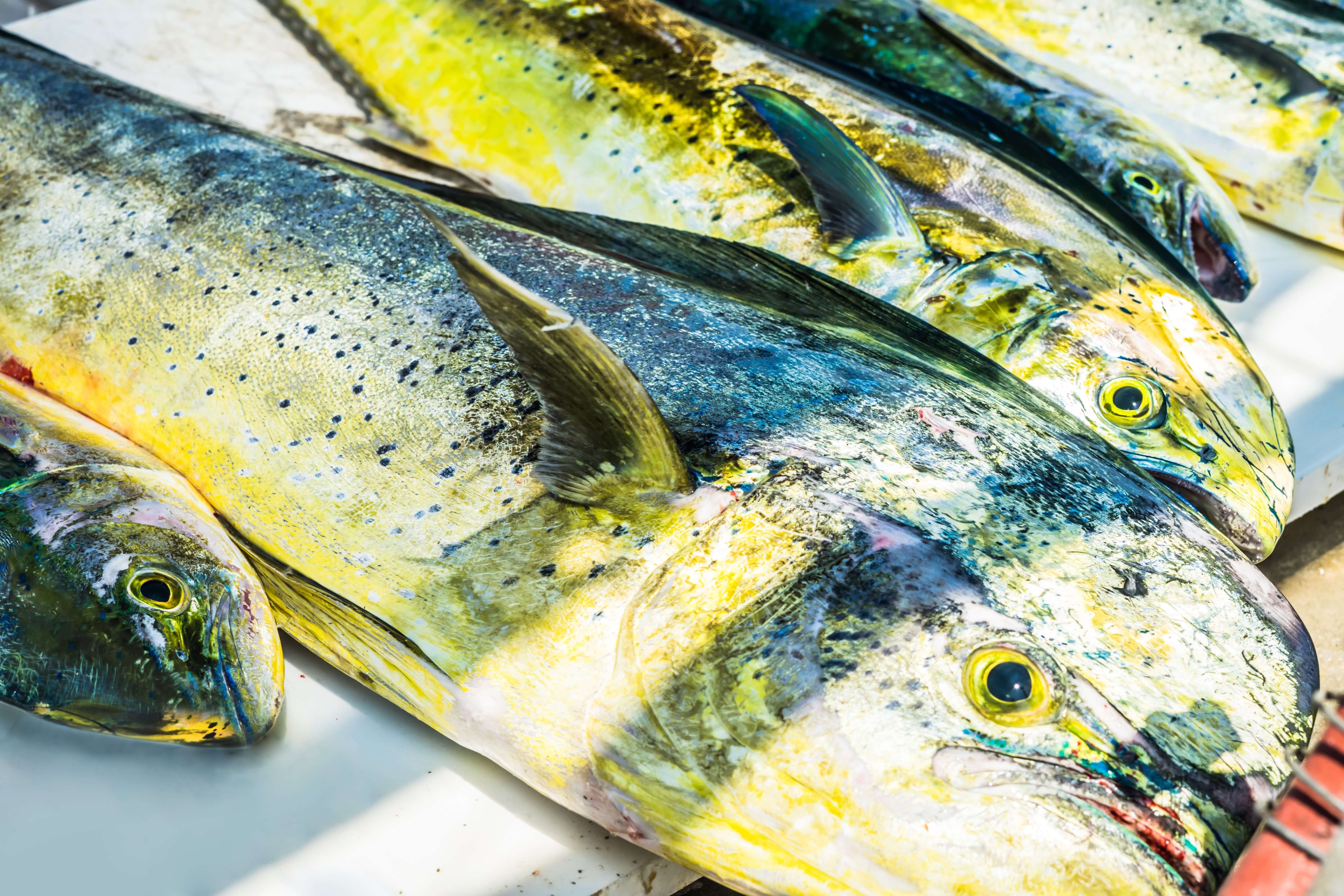 Only one third of the fish consumed in Haiti is supplied by the country´s marine fisheries, even though Haiti has one of the region’s lowest consumption of fish per capita, with approximately 5.8 kg per person per year (FAO, 2017). This gap between local consumption and local fish production is the result of the low productivity of the sector, which can be explained by several factors. First, marine fisheries are exclusively artisanal relying on rudimentary vessels such as canoes and wooden boats (representing 51% and 37% respectively of the country’s estimated 28,000 active fishing boats). But not only that, there are less than 1,200 boat engines throughout the entire country. As a result fishers are only able to exploit Haiti’s coastal fish resources concentrated in the shallow and relatively narrow continental shelf, which are generally small in size and low in biomass. Second, Haiti’s continental shelf is small in area, approximately 5,000 km², with a width not exceeding one kilometer from the shore in many places of the coastline. And third, the number of active marine fishers is very large (at approximately 65,000 versus 10,000 in the Dominican Republic) and they often have no alternative livelihoods. All these factors have led to a situation in which stocks of coastal fish are overexploited and revenues are shrinking, as observed and reported by fishers. Other factors that exacerbate the latter situation are environmental degradation and the absence of fisheries management.

In this context, the Ministry of Agriculture of Haiti (MARNDR) has been implementing the Artisanal Fisheries Development Program (AFDP) in the southern peninsula of the country since 2015. This Program is funded by the Government of Haiti (US$ 1.5 million) and the Inter-American Development Bank (grant of US$ 15 million), and its objectives are to improve Haitian fishers’ income sustainably and to provide fishers with a relatively quick productivity boost, while alleviating the pressure on stocks of coastal fish.

Among other measures, the AFDP promotes the use of artisanal anchored Fish Aggregating Devices (FADs), which are buoys anchored to the seafloor that attract and aggregate pelagic fish, making them easier to catch, as long as, fishers have access to the high seas. In Haiti, FADs are usually anchored between 10 and 30 km away from the shore and at depths ranging from 3,000 to 4,000 meters. It is expected that the use of FADs in Haiti would displace fishing efforts away from coastal areas towards high seas, where fishing resources are larger in size and higher in biomass. In addition, the use of FADs provides a strong incentive for fishers to work collectively which lays the necessary foundations for the establishment of a community-based marine resources management system in Haiti.

Despite these benefits, the use of FADs is limited for several reasons. First, they are costly. In Haiti, building and installing a FAD costs around US$ 4,000 and fishers need additional fishing equipment and fuel to use them. Second, FADs are financially risky because they are fragile devices that could be easily damaged or lost. Finally, FADs have the characteristics of a public good because of free-riding problems. To ease some of these previous constraints, the AFDP has funded FADs and has set up a matching grant mechanism to help fishers associations purchase more adequate fishing equipment related to that fishing technique such as fiber glass boats and engines. The objective of the latter is to reduce the risk of financial exposure of fishermen to increase their willingness to allocate funds to any investment that allows them to transition to the FADs fishery.

A comprehensive study that analyzes the impact of FADs in Haiti (Valles, 2018), using information obtained from 11,000 surveys, shows that the introduction of FADs led to: 1) an increase in the use of boat engines and consequently in fuel gas expenses, 2) an increase in the share of oceanic pelagic species in the composition of total catches, and 3) an increase in the average total weight and value of catches. Thus showing encouraging potential results for the AFDP.

However, the success of the AFDP is conditional on three factors: 1) the ability of fishers associations to ensure the maintenance of FADs and fishing equipment; 2) the joint responsibility of associations and the Government to monitor catches and fishing effort; and 3) the Government’s ability to intervene when the incentive-based FADs approach alone is ineffective such as: when dealing with the catch of juveniles, undersized and endangered species,  as well as during FADs’ low fishing season. However, the AFDP is helping to satisfy the three factors of success previously mentioned, through several activities such as training fishers’ associations, strengthening the Fisheries Directorate of MARNDR, updating the 1978 National Law on fisheries, and better defining the roles and responsibilities of fishers’ associations and the Government.

All in all, the AFDP is an opportunity to improve the productivity, income and therefore the well-being of artisanal fishers in Haiti, while protecting the biological health of the country’s marine resources.

Sebastien has worked with the Bank in Haiti between 2013 and 2019 on the design and implementation of investment grants in various fields such as artisanal fisheries and agricultural health ; he has also worked on the impact evaluations of these different programs.