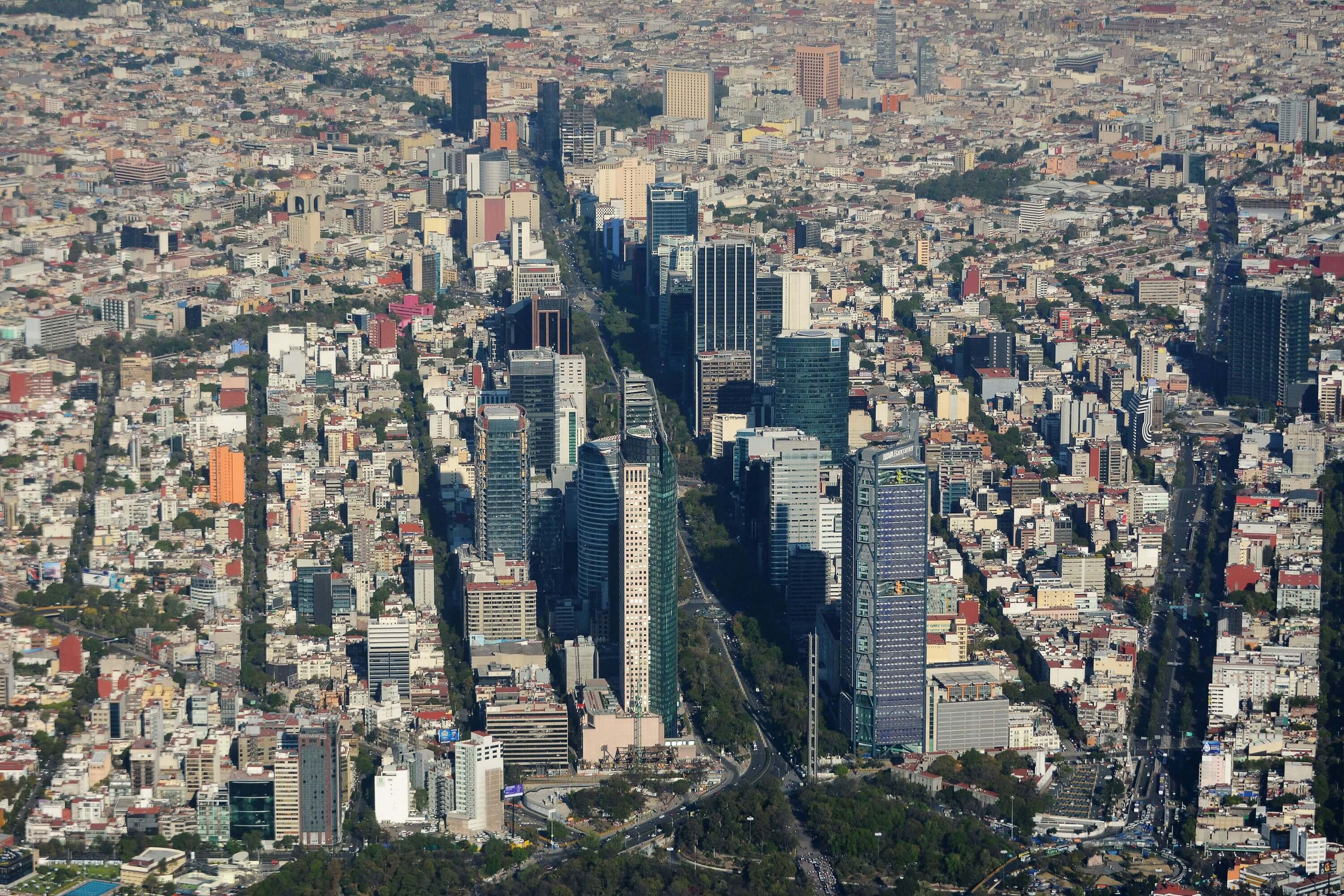 Paseo de la Reforma, Mexico City’s most emblematic avenue, has the worst soil when it comes to the foundation for buildings. Although an earthquake always has the potential to cause substantial human losses and severe infrastructure damage, this road sits on the ancient lake bed of the Valley of Mexico, and, as a result, its soil – notoriously soft and with a high-water content – favors the amplification of seismic waves. Mexico City’s geology is like a bowl of Jello. Try building something on it.

The earthquake of July 28, 1957 remains in the collective memory of the city not only for the destruction that it caused in multiple buildings along this avenue, but also because the Angel of Independence, one of the city’s most iconic monuments, fell to the ground from its 90-meter column and broke into pieces. The devastating earthquake of September 19, 1985 swept through entire blocks of central Mexico City, and has been the deadliest disaster in the history of the Mexican capital. Large buildings, such as the Roble Theater, the Hotel Continental, or the Nuevo León Building, turned into rubble. In contrast, exactly 32 years to the day, on September 19, 2017, another powerful earthquake struck the center of the country. This time, however, the immense skyscrapers in Paseo de la Reforma withstood one of the most powerful earthquakes in a century. What made the difference?
Paseo de la Reforma’s soft soil has not prevented architects and engineers from constructing the tallest buildings in the country along this thoroughfare. In fact, many of these buildings are among the safest in Latin America. The BBVA Bancomer Tower, with its foundations of more than 160 feet below ground, would withstand an earthquake 60 times stronger than that of September 19, 2017. Across the street, the Torre Mayor boasts an incredible 98 giant shock absorbers, which in theory can compensate for the movement of a magnitude-9 earthquake, equivalent to 99 million tons of TNT or about 25,000 nuclear bombs. The Reforma Tower, the tallest building in Mexico City, known for its walls that can bend without breaking, is built to last the full range of earthquake activity projected until year 4520!

Even though these specific examples do not imply that Mexico City is earthquake proof, they do reflect notable advances in earthquake-resistant designs and building code requirements, which result from the strengthening of disaster risk management in Mexico over the past three decades: the 1985 earthquake destroyed 5,728 structures and killed more than 9,000 people . Conversely, 38 buildings (most built before 1985) collapsed and 225 people died as a result of the violent quake that hit last month .

Disaster risk management refers to all the processes to design, apply and evaluate prospective, corrective and reactive strategies, policies and measures aimed at improving the understanding of disaster risks, fostering risk reduction and financial protection from disaster risks, and promoting the continuous improvement of preparedness, response and recovery practices, with the explicit objective of increasing human security, well-being, quality of life, resilience and sustainable development.

Mexico has strengthened its institutions to respond to disasters in a remarkable way. The Index of Governance and Public Policy in Disaster Risk Management (iGOPP), a tool created by the IDB to evaluate, on a scale of 0 to 100 points, the level of favorable governance conditions to implement public policies for comprehensive disaster risk management, shows that Mexico scored 62 points. It is the country with the highest iGOPP score of Latin America and Caribbean, which in turn reflects that Mexico has the most consolidated risk management governance of the region. According to estimates from a recent IDB study, a 1-point increase in the iGOPP score is associated with a 3 to 9% decline in the number of deaths caused by disasters. Hence, it is estimated that Mexico’s reforms in its legal, institutional and budgetary frameworks for disaster risk management over the past 32 years have reduced the number of deaths due to disasters by 79.6%, compared to an alternative scenario where the 1985 regulatory frameworks would still be in place.

The reforms of the Mexican normative framework have shown an evolution in the implementation of national disaster risk reduction initiatives, from a reactive model, where interventions began after a disaster, to a proactive model that gives higher priority to prevention actions. During most of the twentieth century, a substantial number of disaster risk management policies were implemented as a result of influential events in the history of the country. The Mexican Revolution, which culminated in the proclamation of a new Constitution in 1917, authorized Congress to enact laws on civil protection. The floods in the Pánuco River in 1966, which caused damage in the states of Veracruz and Tamaulipas, led to the creation of the National Council for Accident Prevention and the Mexican Ministry of Defense’s Plan for Disaster Relief (Plan DN-III-E).

Disaster risk management reform intensified in response to the 1985 earthquake. In just five years, Mexico’s iGOPP score increased fivefold, going up 16 points between 1985 and 1990 . In order to get a sense of the vertiginous process of reform that took place in Mexico in the aftermath of the 1985 earthquake, consider that, according to the data, iGOPP scores in the Latin America and Caribbean region increase, on average, five to six points every decade. After the quake, the Office of the President created the National Commission for Reconstruction in October 1985, established the National System of Civil Protection in 1986, instituted the National Center for Disaster Prevention in 1988 and founded the National Council for Civil Protection in 1990. The 1976 Building Code of the Federal District was superseded by rigorous building regulations that have allowed new structures, such as Paseo de la Reforma’s high-rise buildings, to withstand violent tremors.

The 21st century marks a turning point in the history of disaster risk management in Mexico, as the country transitioned to a modern approach to risk where preventive activities are prioritized. The General Civil Protection Act of 2000 recognized for the first time the multiple functions of the federal government in terms of disaster protection and the Act’s amendment of 2012 favored both national and subnational civil protection guidelines based on disaster prevention. The Federal Government implemented the National Civil Protection Programs 2001-2006, 2008-2012 and 2014-2018, under the umbrella of the National Development Plan, recognizing for the first time the link between disasters and development, and the relationship between vulnerability and poverty. Together, these actions help explain Mexico’s iGOPP score increase from 27 to 62 points between 2000 and 2014.

The evolution of disaster risk management in Mexico shows that the country has learned the hard lessons of past disasters. However, Mexico can do more. The country still needs to tie its General Law on Civil Protection to other relevant cross-cutting policies, such as climate change adaptation and water resources management. Likewise, government agencies need to promote risk analysis within the health, housing, transport and telecommunications sectors. Another area of improvement toward a more effective disaster risk management is to formally adopt a set of minimum standards for humanitarian assistance procedures and requirements, as well as monitor building code compliance and better building standards in small towns and flood-prone areas. Finally, it is important to evaluate, revise and update land-use plans in areas affected by disasters. Perhaps the earthquake of September 19, 2017 will precipitate some of these reforms, which Mexico needs to continue building an even more ambitious disaster risk management framework. It sure is as challenging a task as building on a bowl of Jello – but Mexico has proven that it can be done.

In a few weeks, this blog will transform into a new blog that will tackle themes of agriculture and food security, climate change, ecosystems and biodiversity, infrastructure and sustainable countries, and responsible production and consumption: “Let’s talk about sustainability and climate change.”