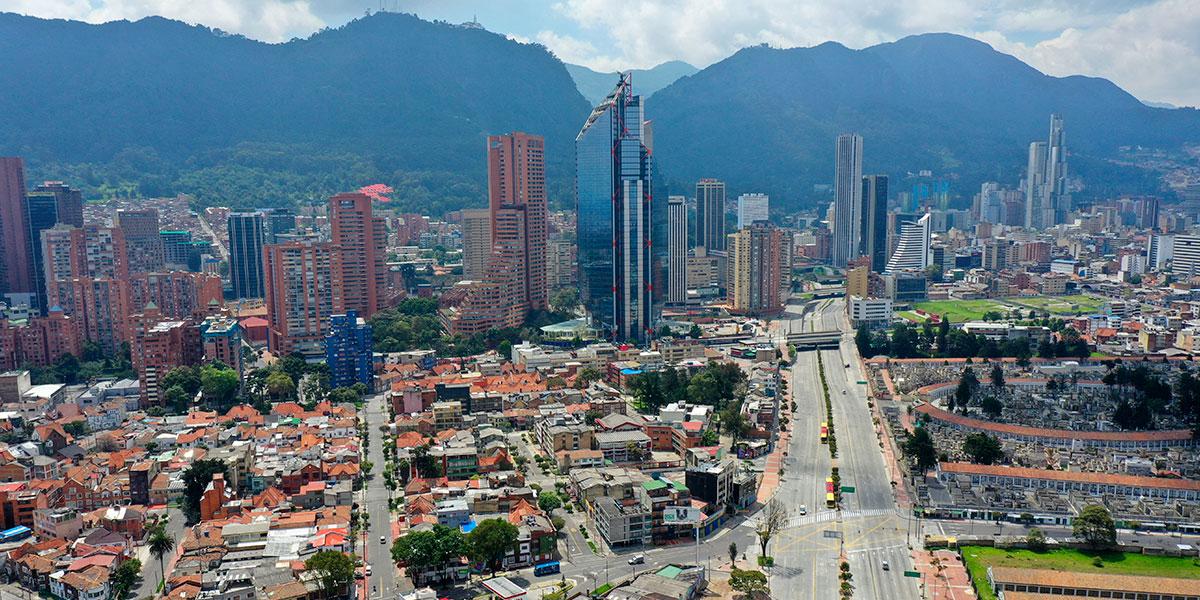 For decades, air quality indices in Bogotá and Medellín were not as positive as those presented between March and May 2020, following the mandatory confinement ordered by the government to face COVID-19.

Caused by increasing air pollution from emissions from traffic and industrial and productive activities, the constant red, orange and violet alerts had become almost never-ending. However, suddenly this situation was reversed and gave way to good and acceptable levels of air quality in both cities.

Given the novel situation, it is worth reflecting on how to keep the air cleaner and build more resilient, inclusive and sustainable cities.

The pandemic led to a steep drop in air pollution

Measures to halt the current pandemic resulted in a drop in critical levels of air pollution. On April 3, Bogotá lifted its yellow alert following the decrease in the different forms of mobility and the cessation of most polluting productive activities. The levels of particulate matter dropped steadily to 11.50 micrograms per cubic meter, thus removing restrictions imposed on industries and vehicles last February.

Air pollution also decreased markedly in Medellín in late March. According to the records of the Early Warning System of Medellín and the Aburrá Valley (SIATA), all air quality monitoring stations in the city went into the yellow category, after having registered between 4 and 9 stations in the previous weeks in red. This phenomenon also occurred in other cities such as Buenos Aires, Lima and Santiago de Chile.

Poor air quality increases the vulnerability of the population

The coronavirus crisis has made visible how poor air quality increases the population’s vulnerability to the impacts of this type of pandemic. A recent study from Harvard University shows that COVID-19 patients living in areas of the United States with high levels of air pollution were more likely to die from the infection than those patients in areas of the country with cleaner air.

In Colombia, studies that warned about the cost of pollution for society had been previously carried out. Colombia’s National Planning Department estimates that approximately 8 thousand deaths per year would be associated with the poor air quality, which, added to the costs of associated diseases, could represent $ 12.3 billion Colombian pesos (USD 3.3 trillion) annually (1.5% of GDP). To put it in context, to date there have been around a thousand deaths in Colombia caused by the virus.

The situation reiterates the enormous importance of advancing more ambitious actions on this matter, which invigorate the public agenda for improvement in urban quality and reduce the vulnerability of populations in the face of health crises. In fact, health is a key pillar for resilience, and a population in good health can better cope with a pandemic.

Innovative solutions are being adopted in cities

In the case of Bogotá and Medellín, government authorities are taking innovative measures that are having an impact on air quality. Regarding urban road infrastructure, measures were implemented around bicycle lanes in cities and to encourage the use of bicycles. The Medellín mayor’s office established a strategy that included:

For its part, in Bogotá, 80 kilometers of temporary bicycle routes were added to the 550 existing kilometers, further consolidating this means of transportation as an alternative in the city.

These measures, in addition to helping to avoid the spread of COVID-19, reduce trips in polluting vehicles and promote physical exercise and reduce risk factors associated with diseases such as obesity and diabetes. It also helps lower emissions that contribute to global heating.

On the other hand, they complement the ambitious plans of both cities regarding electric mobility, especially public buses, thus consolidating a comprehensive vision of sustainable mobility. Some studies have pointed out that to avoid the possibility of increasing coronavirus infections when the economy reopens, air pollution should be kept low.

It is important to assess the possibility of further stimulating teleworking strategies that were imposed in various sectors of the economy. Even though in Colombia, since 2008 Law 1221 had been enacted to promote and regulate teleworking, progress had been insufficient in both the public and private sectors. Currently, many citizens who can telework have been demanding that this strategy become permanent, which would reduce congestion in the city and as a result, air pollution.

To support citizens, Bogota’s Environment Department launched a smartphone application last fall called Aire Bogotá that provides real-time information on the city’s air quality gathered from a robust monitoring network of over 20 stations. The IDB is conducting an evaluation to determine whether the app enables city residents to avoid exposure to severe air pollution, by for example, rescheduling times to exercise, and whether it changes their environmental attitudes.

Pedaling into the future

The pandemic crisis is an opportunity to think about how we can create more sustainable, inclusive and resilient cities. Of course, many of the response measures are temporary and may be reversed once the health crisis is over.

However, the pandemic will leave its mark on the population around alternatives to traditional mobility and work patterns to which it was accustomed. And perhaps there is also a greater demand from citizens around the possibility of having more attractive cities, cleaner air and sustainable infrastructure that is crucial to face the climate crisis.

Additionally, the weekly Ciclovía events held in several Colombian cities where many roads are car free for cyclists and walkers have a long history and enjoy high popularity. There is a good opportunity to build on these policies so that all citizens can enjoy urban areas, while continuing to practice social distancing.

Recent efforts in Bogotá, Medellín and other cities to expand bicycle lines and promote sustainable transport are exactly the measures we need to tackle the current emergency while laying the foundations to build more resilient and sustainable cities in the future.

Analysis and design of business models and financing mechanisms for electric buses in Lima, Peru.

Bogotá is a pioneer in acquiring electric buses by tender

José Manuel Sandoval is a consultant at the Climate Change Division of the Inter-American Development Bank. He studied Finance, Government and International Relations at the Externado de Colombia University and the Paris Institute of Political Studies (Sciences-Po), and has a postgraduate degree in Environmental Management. He has 15 years of professional experience in climate change and sustainable development issues, including in the government of Colombia (National Planning Department, Ministry of Environment and Congress of the Republic), in international agencies (UNDP, UNEP and GGGI), as well as in the private sector. José Manuel has participated in the development of public policies, formulation and monitoring of cooperation projects, climate finance initiatives and international negotiations at the UNFCCC and other international forums.

Guy Edwards is a senior consultant in the Climate Change Division at the Inter-American Development Bank. Previously, he was a research fellow at the Institute at Brown for Environment and Society and co-director of the Climate and Development Laboratory at Brown University. He has a Master’s Degree in Latin American Area Studies from the University of London. He is the co-author of the book, A Fragmented Continent: Latin America and Global Climate Change Policies (MIT Press 2015). His work has been published by El Espectador, Climate Policy, Brookings Institution, E3G, The New York Times, Washington Post, Project Syndicate, Chatham House, Real Instituto Elcano, El Universal, El Comercio, Americas Quarterly, La Tercera, and The Guardian.

Andrea is a consultant at the Climate Change and Sustainability Division of the Inter-American Development Bank (IDB). She is a communication strategist and multimedia content creator specialized in climate change and development, with seven years of experience. Andrea led youth engagement projects and digital campaigns with Climate Tracker, a network of climate change journalists in over 100 countries. Previously, she collaborated with youth climate associations and forest conservation initiatives in the Peruvian Amazon, reported from UNFCCC climate summits, and worked with the Environment and Energy team of the UNDP in Peru during the COP20 process. Andrea holds a MA in International Development with concentration in Environment and Migration from the Paris School of International Affairs - Sciences Po in France, and a BA in Communication for Development from the Pontifical Catholic University of Peru.