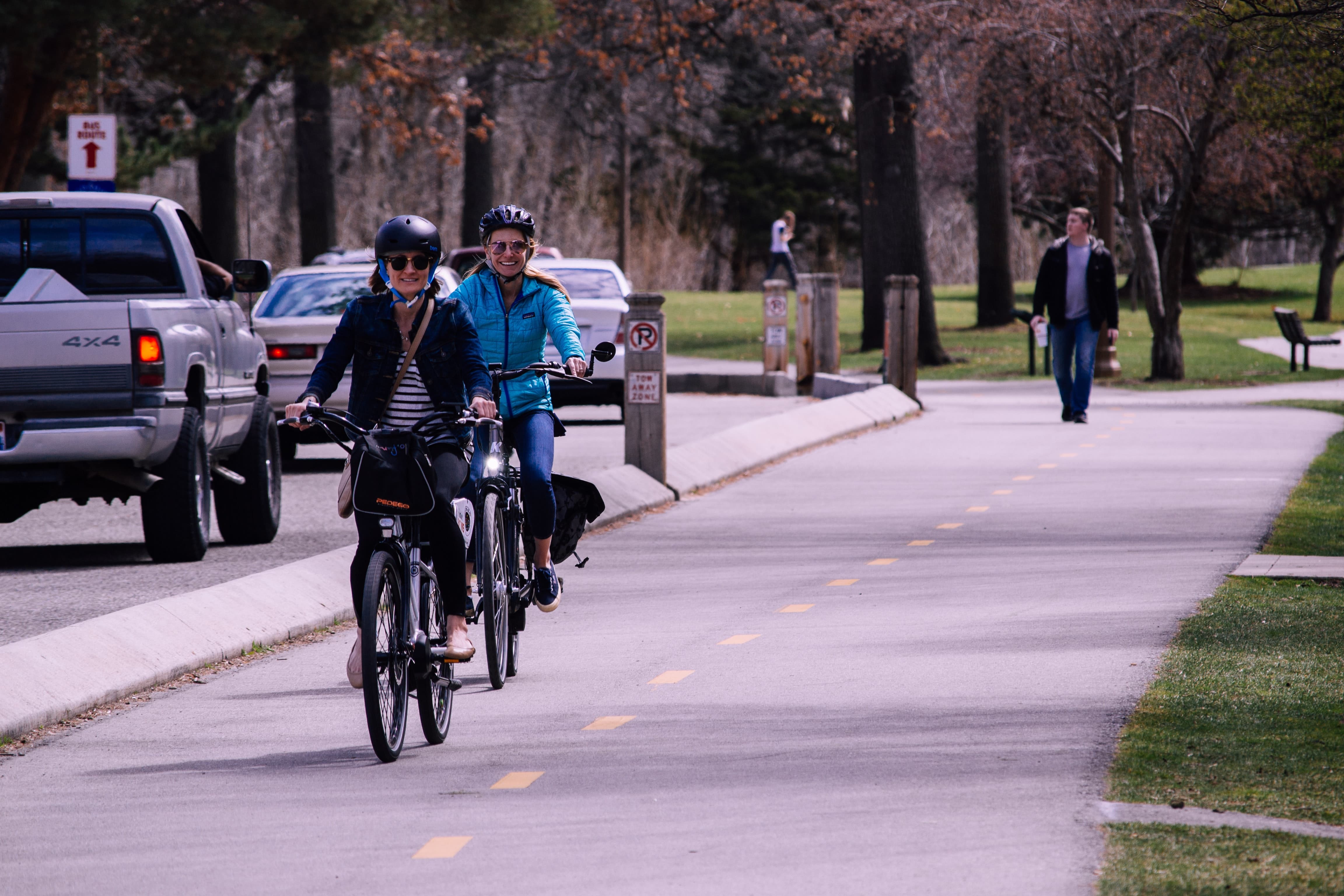 June 3 is World Bicycle Day, an invention almost 200 years old that has added inestimable value to the world.

During the coronavirus pandemic, the bicycle represents an unmatched rival to permit a more hygienic way to move around, contribute to a sustainable recovery of the economy, and support the transformation of urban transport towards decarbonization via a just transition.

It is necessary to continue reclaiming the streets and public spaces, as we move forward in solving the climate crisis.

Before and during the COVID-19 pandemic

In Latin America and the Caribbean, cities are not characterized by efficient or equitable distribution of public space. Streets are congested and gasoline continues to be generously subsidized. Although some cities have attempted to reclaim space for pedestrians and cyclists, there is still work to do.

The measures implemented to curb the spread of the new coronavirus have caused the closure of businesses and the cancellation of social events. With the current “physical distancing” measures, the use of public transport decreased to very low levels, the operations of some micromobility (small, lightweight, low-speed electric means of transport used for short distances) providers has been interrupted, and ridesharing trips plummeted. Private vehicular traffic has dropped to historic lows and parking lots stand empty – the perfect recipe for reclaiming urban spaces.

The following points detail some determining factors to take advantage of the current context, empower the bicycle as an agent of change and contribute in the solution of some of the most urgent challenges of this decade.

In the current context, pedestrian sidewalks are insufficient to maintain minimum physical distance, while there is a lot of space on the roadways due to the drop in vehicular traffic. Solutions such as the introduction of temporary bicycle lanes, the expansion of pedestrian paths or streets with calm and shared traffic, which have been tried in cities before, are emerging as some of the possible measures cities can implement quickly and obtain numerous benefits.

For example, in our region, the dedication of 80 km of bicycle lanes was announced in Bogotá, while Mexico City is adapting 66 km on important avenues in the city. The key here, is to ensure that most of this infrastructure remains long-term.

Although total demand for travel fell sharply, workers in essential sectors continued to travel, many of them by bicycle. In the United States, England and Germany, bicycle stores reported an increase in sales of up to 700%, compared to the previous year.

In Paris, the bikeshare system informed that in the second week of May over 400,000 trips were made, almost 120,000 of them in a single day. In London, electric bikeshare trips doubled in less than three weeks. Across the Atlantic, public bicycle trips in New York increased almost 70% compared to 2019. And in Latin America there is no going back.

Undoubtedly, during the crisis there has been an increased use of the bicycle as a more hygienic alternative for transportation and in response to the demand for the provision of basic goods at home. However, in order for its use to continue to be promoted, greater road safety is required, since although in most cities the number of car trips has decreased, the speed and consequences of traffic incidents have also increased.

In early 2020, the price of a barrel of oil plummeted to US$ -4.47 due to near-non-existent travel demand during the pandemic. In recent years, many countries have eliminated gasoline subsidies, creating fiscal space to finance more sustainable projects.

These resources can be used to create “funds to promote active mobility”. Furthermore, the adoption of “carbon taxes” can also contribute significantly to the goals of the Paris Agreement, and thus limit global warming to less than 1.5°C, compared to pre-industrial levels of carbon dioxide emissions.

The goals of micromobility companies and their regulators need to be aligned. In this sector there is an over-regulation that does not encourage innovation and competition, and the collection of operating permits fees increases the final cost to the user. The resources for an eventual elimination of gasoline subsidies could be invested in micromobility so that services are more equitable and companies can prosper.

Likewise, electric bicycles have enormous potential in areas where public transport systems are inadequate and where income is not enough to purchase a car. Encouraging the use of the e-bike can be decisive to reactivate the economy, as the recovery of public transport demand will happen gradually.

In Colombia, there is already a company that, for a little over US $ 50, provides monthly e-bike memberships that include support and maintenance. In this way, the need to purchase a car can be discouraged and, thereby, also reduce the sector’s polluting emissions.

In Latin America, the benefits of bikeshare systems have begun to be evident. It is necessary to increase the adoption of such systems in large cities and strongly promote it in intermediate cities, guaranteeing the integration of their operation with the city’s mobility plans.

The IDB, the World Resources Institute (WRI) and the Global Environment Facility (GEF) have designed the Guide for the Structuring Bikeshare Systems (currently in Spanish only). This tool seeks to guide decision-makers in defining the elements of optimal investment in these systems, identifying the sources of resources to finance said investment, the distribution of risks and responsibilities of the different actors involved, and mobilizing the investment capital.

Its time to hop on your bike

Following the COVID-19 pandemic, there is a realistic opportunity to create a virtuous circle of promotion and investment in environmentally-friendly infrastructure and mobility, leveraging the bicycle as the engine of this change.

It is the time for citizens to demand and city authorities to demonstrate the political will to prioritize health, air quality and harmony in urban life, to make the timely decision to face the pandemic by promoting bicycle use and the different associated technologies and permanently transform mobility for the benefit of society.

Read the Guide for the Structuring Bikeshare Systems (currently in Spanish only) here.

Ramiro Alberto Ríos holds a Master's degree in urban and transportation planning by the University of California, Los Angeles. He has more than 10 years of experience working on urban mobility and transportation projects around the world. He has held positions as a transport and environment researcher at the Institute for Transport and Development Policies (ITDP), consultant to the transport divisions of the Inter-American Development Bank and the World Bank, Principal Transport Planner for the city of Alexandria in Virginia and most recently as manager of entry to Latin American markets at JUMP Bicycles. Ramiro is an avid cyclist who is convinced that the bicycle is an agent of change that is about to explode in our cities.

Claudia is an environmental management and policy and climate change specialist. She advised the Colombian government for a decade in the formulation of economic instruments for environmental policy; the negotiation and adoption of international agreements on hazardous waste, biodiversity, and climate change issues; and in the planning of the country's protected areas system’s management. She has consulted for organizations such as the World Wildlife Fund and The Nature Conservancy, in Colombia, as well as the World Bank, the University of Washington and Local Governments for Sustainability (ICLEI), in the United States. She is currently a consultant at the Inter-American Development Bank (IDB) Climate Change Division, where she coordinates the execution of the project “Climate Technology Transfer Mechanisms and Networks in Latin America and the Caribbean” (financed by the Environment Fund Global - GEF), and supports the Competitiveness, Technology and Innovation Division in the analysis of synergies and climate financing of the Divisions operations. Claudia studied economics at Universidad de Los Andes in Colombia and holds a master's degree in Environmental and Natural Resources Economics from the same university, as well as one in Regulation from the London School of Economics and Political Science.

Iván is Manager of Active Mobility in the Cities program at WRI Mexico, responsible for providing technical and management support to cities for the development of pedestrian, bicycle and micro mobility projects in general, as part of the integrated transport networks, the recovery of public spaces and improvement in road safety. Some of the management's projects include the planning, design and implementation of active mobility strategies, bicycle and pedestrian infrastructure networks and shared bicycle systems for cities in Mexico, Colombia, Santo Domingo, India and Ethiopia. Prior to this, Iván was Director of Culture, Design and Cycling Infrastructure of the Government of Mexico City, an area specifically created for the implementation of the Bicycle Mobility Strategy, responsible for the implementation of the ECOBICI public bicycle system, the construction of the network of public bicycle lanes and bike parks, as well as the operation of the Sunday promenade and the bicycle bikes. He holds a degree in Administration from the Universidad del Valle de México and has participated as a speaker in various international forums and conferences.