My hair is mine and not mine. It is quite boring, some part wavy some part coarse, it grows fast and wild. Yet it tells the story of who I am (Caribbean of African descent), my social background (middle class), and my racial DNA (a medley of all that trampled the Continent). For me, it is not just hair.  My “Black-Hair” stands for the historical weight that I bear as an Afro-Caribbean woman.

It is a story of the American continent and colonialism. First, let us start with the slave trade. Shaving the hair of enslaved African women (and men), explained under the banner of preventing the propagation of head lice after the Middle Passage, was also strategic as it meant a loss of tribal identity. Shorn, our African ancestors were turned into slaves. For enslaved African women, rape was a constant reminder of the racial and gender power imbalance in the colonies. Incongruously, mixed-raced children, consequences of these rapes, had features that appealed to white society. Longish curly black/brown hair was one of them. In the pecking order of the plantations, these mixed raced children were fortunate, given less strenuous work, a bit of schooling and, if their white progenitors were assailed with moral doubts, the possibility of freedom. Post-slavery era gave rise to a mixed-race class holding to their privileges by the threads of a complicated hair identity. Hair became a social trademark as “Black-Hair” was associated with slavery.

Fast forward a few centuries. In the early 20th century, African-descendant women’s entry to the formal labor force was a hard-won fight in most countries, because of their race and sex and, in some cases, national identity.  Everything else equal, hair became a working strategy as African-descendant women with straight hair, natural or straightened by chemical process, were less threatening to whites. LFor African descendants, the 60’s and 70’s civil rights gave rise to freedom, and natural hairstyle became a political and politicized statement. The Afro represented black identity, a definition of self outside of that determined by mainstream ideal of beauty. Mainstream society continued to associate the Afro and all other natural hairstyles with civic unrest. During the civil rights era, faced with entrenched and overt racism outside and in the workplace, African-descendant women felt pressured to straighten their hair once again.

The beginning of the 21st century saw a resurgence of “Black-Hair” as a symbol for and of identity, even in places with complicated racial identities. This hair empowerment has led to a backlash in mainstream society, with discrimination and micro-aggression common in the workplace. A study undertaken by the Perception Institute confirmed that there is explicit bias toward against black women’s textured hair. “It is rated as less beautiful, less sexy/attractive, and less professional than smooth hair.” Certain hairstyles have been often deemed unprofessional, unclean, and unkept and African-descendant women and girls have been punished for wearing their hair natural at best or have lost their jobs.

On this 25th of July, the International Afro-Latin American, Afro-Caribbean & Diaspora Women’s Day, let us look forward to the day when our hairstyles will not be used as a justification to discriminate against African descendants in politics and the workplace.   My Black-Hair is an expression of myself and a tale of my history. It communicates our diversity as we continue to call for our inclusion in the political, social and work spaces. It is the story of our resilience, self-acceptance, identity; that alone is cause for celebration. 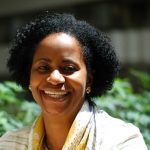 Laurence Telson is a US Citizen and a native Haitian. She currently works at the Inter-American Development Bank’s Gender and Diversity Division.