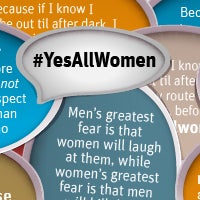 When I lived in Mexico City, I traversed the city in metros and buses so packed that you had no control over who was touching you. Every woman I know, including myself, had a story of being groped, assaulted, or intimidated on public transportation. The violence of everyday life for women often goes unperceived, but the misogynist manifesto by Elliot Rodger, who on May 24th killed six people and injured 13 in Santa Barbara, California, prompted over 2 million tweets by women with the hashtag #YesAllWomen.

In his manifesto he wrote: “I started to hate all girls. I saw them as mean, cruel, and heartless creatures that took pleasure from my suffering”. He also proposed placing women in concentration camps and allowing only “rational men” to choose their mates.

Although some news sources labeled Rodger as “mentally ill”, it is important to consider what aspects of our misogynist culture contributed to the attitudes that Rodger held. As Sasha Weiss of The New Yorker wrote, “Rodger’s fantasies are so patently strange and so extreme that they’re easy to dismiss as simply crazy. But, reading his manifesto, you can make out, through the distortions of his raging mind, the outlines of mainstream American cultural values: beauty and strength are rewarded. Women are prizes to be won, reflections of a man’s social capital. Wealth, a large house, and fame are the highest attainments. The lonely and the poor are invisible. Rodger was crazier and more violent than most people, but his beliefs are on a continuum with misogynistic, class-based ideas that are held by many”.

Immediately after the murders, women started tweeting about experiences of violence and harassment under the hashtag #YesAllWomen. They spoke of the daily indignities of worrying about their safety in public spaces, of being groped, threatened, or raped. They addressed specific issues, like the fact that in 30 U.S. states, rapists get parental rights like weekend visitation.

In reaction, some men started tweeting #NotAllMen, an attempt to silence the conversation, to say that by discussing daily realities, women were insulting all men. Similarly, they complained that the fact that Rodger also murdered men was evidence that the killings had nothing to do with misogyny. Why are women unable to speak about individual experiences without being silenced or insulted?

What would this discussion look like in Latin America?

As a recent heat map of tweets shows, the U.S. and the United Kingdom had the highest concentration of #YesAllWomen tweets. What would this discussion look like in Latin America and the Caribbean? How would the preoccupations and experiences of women there contribute to this discussion?

In countries like Mexico, Guatemala, and Costa Rica, where rates of feminicide are high, what types of daily violence contribute to the marginalization of women and their voices? In my research about violence against women in Mexico for my forthcoming book, More or Less Dead, I witnessed time and again how women’s testimony about crimes was belittled, how the police refused to take them seriously, how judges said they were prostitutes or bad mothers rather than listening to them.

I interviewed Mexican journalist Sergio González Rodríguez, who wrote an investigative book about violence against women in Ciudad Juárez. When asked about why he believed the term feminicide was important, he said: “Men are not killed for being men. Women are killed for being women, and they are victims of masculine violence because they are women. It is a crime of hate against the female gender. We cannot ignore this. These are crimes of power. Yes, men are killed like flies, but they are not killed for being men. Women are”.

To add your voice to the discussion about misogyny and the violence of everyday life tweet #YesAllWomen #SíTodasLasMujeres and share your story.

*Alice Driver is a writer who explores issues of gender, women’s rights, and human rights with a focus on Mexico. Her book “More or Less Dead: Feminicide, Haunting, and the Ethics of Representation in Mexico”, is forthcoming with the University of Arizona Press in 2015.