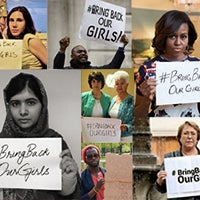 The pressure to find the 276 abducted Nigerian schoolgirls didn’t initially come from the Nigerian government, from international heads of state, or from news organizations. It mounted on Twitter with a flowing river of hashtags– #BringBackOurGirls, #BringBackOurDaughters–hashtags that then made their way to live protests as people marched in solidarity with the missing girls.

Organizing on social media led to protests in front of Nigeria’s parliament, in New York, or in Washington DC. A Nigerian activist tweeted: “My name is Timidi Omolere, Mother, Friend, Sister to the Chibok Girls. I am worried about them & I just want the govt to #BringBackOurGirls”. She was joined by voices around the world including Pakistani activist Malala Yousafzai, who tweeted a photo of herself holding a #BringBackOurGirls sign, or Hillary Clinton, who talked about access to education as a “basic right” for girls.

The Twitter conversation expressed outrage at the lack of action and explored why the abduction of black girls had been treated as a non-event. Had this happened to white girls, to schoolgirls in Paris–people speculated that the reaction would have been different, and that international outrage would have immediately led to action.

In his weekly column in The New York Times, Nicholas Kristof made the point that “while there has been a major international search for the missing people on Malaysian flight MH370, and nonstop news coverage, there has been no meaningful search for the even greater number of missing schoolgirls”. There is no clear equation for the value of lives, and more missing girls than airline passengers evidently does not mean equal news coverage.

The conversation sparked by Twitter is so important because it relates to the way we as a society value people based on their skin color, their gender, and their economic situation. To be a black girl seeking education in an impoverished area, especially one in a society like Nigeria that is still culturally opposed to educating women, is to inhabit a precarious geography, one in which your life is worth very little. As if to prove this point Boko Haram, the militant group that kidnapped the girls, started to auction them off as wives for $12 each. Instead of getting an education, the girls ended up in the human trafficking trade. Why did this event not initially produce more international outcry?

Although Twitter and tweeting can seem like a superficial act, in situations where governments and institutions are not responsive to the people, it gives individuals the power to mount a public protest, to organize via words and hashtags. In this case, Twitter has shown us, through voices across the globe, that the conversation we need to be having about the missing schoolgirls is not just about rescuing them – it is about gender and race, about education and equality.

*Alice Driver is a writer who explores issues of gender, women’s rights, and human rights with a focus on Mexico. Her book “More or Less Dead: Feminicide, Haunting, and the Ethics of Representation in Mexico”, is forthcoming with the University of Arizona Press in 2015.