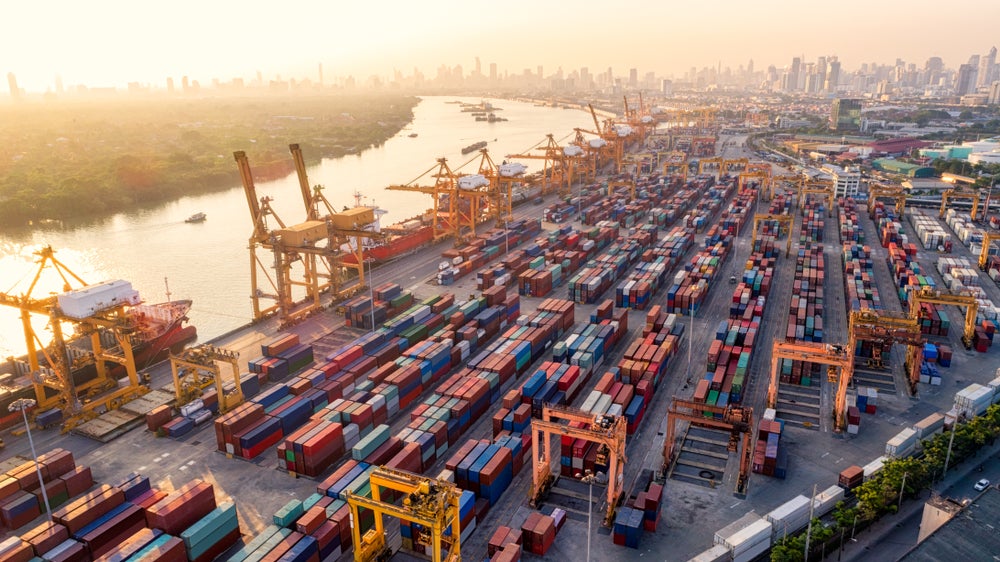 Is free trade beneficial to Latin America and the Caribbean? Most economists believe it is. Free trade allows countries to specialize in what they do best, developing competitive advantages and leading to greater consumer choice and lower prices.

Most citizens seem to agree. An IDB-commissioned poll, included in the cross-regional Latinobarómetro survey, finds popular support for international trade to be strong, with 73% of citizens in 2018 in favor of increasing it.

This support, however, is fragile. It can be “a mile wide, but an inch deep,” in the words of Princeton economist Alan Blinder. Citizens may favor more trade. But if politicians warn of job losses from lowering trade barriers and if media and social media hype those arguments, backing for trade can dwindle. What can make the difference is how arguments in favor and against free trade are cast.

Guarding against the negative framing of free trade

This means that policymakers who believe in trade have to be aware of how it is being portrayed, how its benefits and losses are framed. This issue is probed in an advance chapter of the IDB’s 2019 flagship publication, Trading Promises for Results, which will be released soon. Trade faces numerous challenges, the publication stresses, including those brought on by geopolitical and technological changes. Safeguarding popular support for free trade in this context may depend on preventing it from being portrayed in a negative light.

Here some concepts from psychology and behavioral economics about framing arguments come in handy. Consider loss aversion, the idea that people are affected more by the fear of loss than the enjoyment of gains. Or the closely related idea of negativity bias that claims that people react more strongly to unexpected negative news than to unexpected positive news. We have an instinct for self-preservation, psychology tells us, and negative surprises and the fear of loss are very potent.

The psychological impacts of messages on trade

An experiment conducted for the new IDB flagship publication shows just how powerful these forces are when it comes to trade. The researchers randomly assigned Latinobarómetro poll respondents to four different groups: a control group, a positive framing group, a negative framing group, and a mixed framing group.  Each was asked if it supported trade given the possibility of specific benefits or losses.

The positive framing group was told trade would reduce prices and increase product choice. How did they react to this positive message? Amazingly, it had virtually no impact. Two arguments can explain why. First, the statement was not surprising: most respondents were already inclined to believe that trade provided consumption benefits. Interestingly, many respondents also associated low prices and foreign goods with low wages. 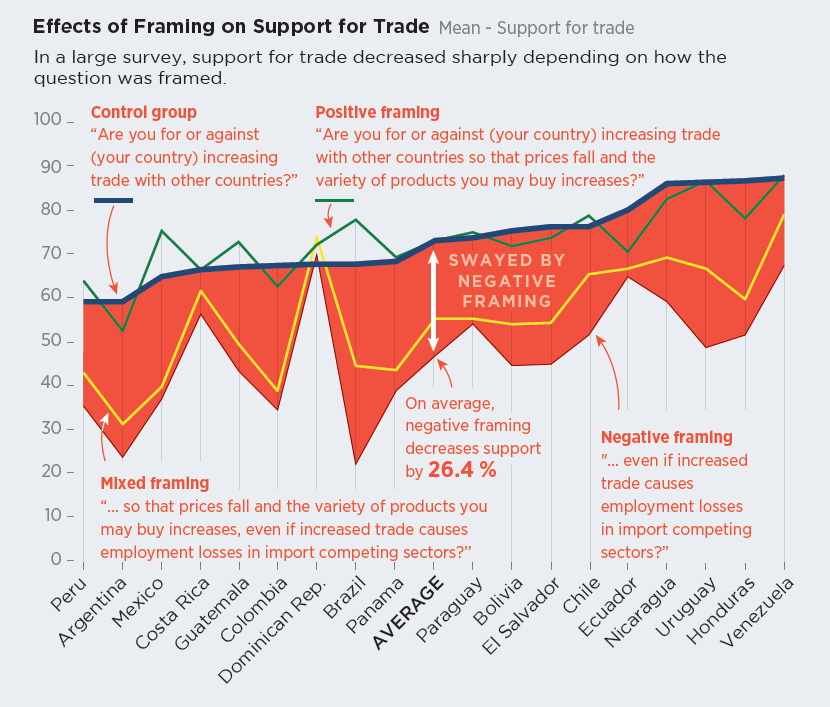 Concerns about employment also turned up strongly in the other treatment groups. The negative framing group, informed that trade could lead to job losses in import-competing sectors, displayed a powerful reaction. Support for trade in that group dropped more than 26 percentage points from around 73% to only around 46%. Loss aversion — the fear of losing employment — almost certainly played a role. So did negativity bias, as people who had had a positive image of trade as a net job creator now received a negative shock to their beliefs. The negative framing group, in short, got a double blow — a feeling of both loss and negativity — that turned overwhelming backing for trade into minority support.

This was somewhat mitigated in the mixed framing group, which was told that trade could generate both the positive benefits of falling prices and greater product choice and the drawbacks of job losses. Among this group, support for trade dropped around 17 percentage points, with the positive information not enough to offset the negative, but still reducing its effect by more than a third.

There were also some interesting variations among countries. In Costa Rica, for example, the negative arguments against trade caused reductions in support of only 9 percentage points, compared to the regional average of 26 percentage points. This is likely because the country had a referendum on the Central American Free Trade Agreement (CAFTA) in 2007 and its citizens were already well-versed in the arguments for and against trade. They had firmer beliefs and preferences about it and were thus potentially less affected by the negative framing emphasizing job losses.

Still the negative arguments had their impact, indicating how important it is to guard against trade opponents who marshal negative information about jobs — the most important consideration for people in the region — to derail efforts to liberalize the region’s economies. Policymakers who believe in trade may have to counterpunch with information about the potential employment gains. Or, as indicated by loss aversion, they may want to emphasize employment losses in export sectors that could result from protectionist measures.