The COVID-19 crisis has impacted most aspects of social life in an unprecedented manner. And while the situation is nothing short of dramatic for the average person, the effects of the pandemic are felt far more acutely in prisons across Latin America and the Caribbean. More than 1.2 million people live behind bars in the region, most in overcrowded penitentiaries where poor conditions increase the risk of infection and governments struggle to find the appropriate response. In this first article of a two-part series, we discuss some of the challenges this crisis poses to the region’s criminal justice systems.

Since the first case of COVID-19 was confirmed in Brazil in late February, the situation in Latin American prisons has been critical. Several riots have erupted not because of the virus itself but because of fear, uncertainty and poor communication between authorities and inmates. After the government restricted visitation rights in Brazil, 1.500 people escaped from prisons in Tremembé, Porto Feliz, Mirandópolis, and Mongaguá. In Colombia, prisoners staged riots in Bogotá and Huila that resulted in the death of 23 people and left 83 injured. Similar incidents have been reported within the last month in Argentina, Bolivia, the Dominican Republic, Ecuador, Panama, Peru, and Uruguay.

Inmates are requesting better sanitation, flexibility with visiting schedules and concrete actions to decrease the risk of widespread infection. And some local governments have taken action to address their concerns. For example, a number of Mexican prisons have made visitations virtual by using videoconferencing technologies. Prisons in Jamaica and Argentina have increased access to disinfection and cleaning supplies and how often they clean cells and shared spaces. Meanwhile, countries like Chile and Brazil are currently evaluating laws that would release non-violent offenders over a certain age limit. Even though these measures are steps in the right direction, many of them lack coordination, have been poorly communicated, and vary drastically between countries.

This pandemic has exacerbated the already chaotic situation in Latin American prisons. To really understand how vulnerable the region’s prison population is, we must first examine their situation before the novel coronavirus even hit. The Institute for Crime and Justice Policy Research (ICJPR) at the University of London pools data on prison populations and occupancy levels. According to their numbers, there are an average of 282 inmates for every 100,000 people in Latin America. In Europe, that figure drops to 130 inmates and in Asia and the Pacific to 184. Latin America is among the regions with the highest incarceration rates in the world, second only to the United States.

At an average 163%, the region also has one of the highest prison occupancy levels. For every available unit in a Latin American prison there are currently 1.6 inmates. This figure climbs as high as 454% in the case of Haiti. In contrast, prisons in Europe have an average occupancy rate of 87%, with roughly half as many inmates per unit as in Latin America (see Figure 1).

High incarceration rates coupled with high prison occupancy levels make for an environment where viruses and disease can spread easily. Immediate action is needed to contain this situation since countries like Colombia, the Dominican Republic, and Ecuador have already reported cases of COVID-19 in some of their prisons. 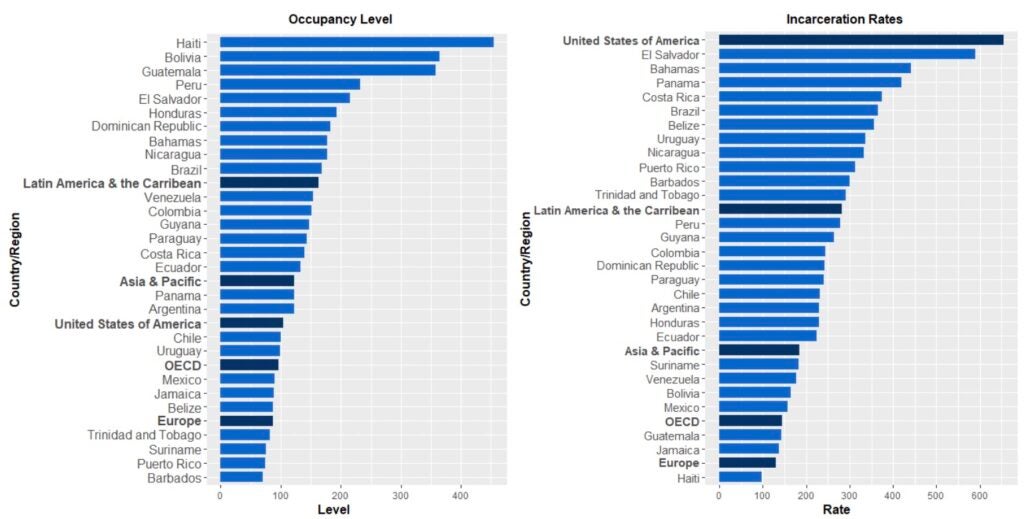 Several countries have already taken drastic measures to minimize the risk of contagion inside their prisons. As of April 20, a total of 5.925 federal and state-level inmates and 2.407 prison staff in the United States had tested positive, according to Covid Prison Data. States like New York, Ohio and Illinois have already released non-violent offenders in an effort to address overcrowding. Several countries in Europe and around the world have followed the same path. French, British and German authorities announced that they will be releasing 5,000, 4,000 and 1,000 non-violent inmates, respectively. France reported a decrease of 9% in its prison population between March 15 and April 1.

Incidents similar to those reported in Latin American prisons have occurred in Italy and France. In response to the increased vulnerability of inmates, the United Nations Subcommittee on Prevention of Torture published a report this month detailing concrete steps for governments. Their recommendations center around ensuring the safety and health of inmates. The report also emphasizes the importance of providing accurate and complete information to inmates in a timely manner to avoid conflict. These recommendations reinforce inmate rights and liberties and are designed to limit the spread of the virus.

Some countries in Latin America have also taken concrete steps in this direction. On April 17, the Chilean government passed a law that will commute prison sentences to house arrests and could affect 1,300 inmates currently in the prison system. Among others, this general commutative pardon benefits men over 60 years of age and women over 55, as well as pregnant women or mothers with children under two years in custodial sentences. In Bolivia, the government ordered to release men over the age 58 and women over the age of 56. Similarly, the National Court of Justice in Brazil recommended restricting pretrial detention only to necessary cases and finding alternatives such as house arrest for current inmates.

Some of the countries with the highest prison occupancy levels have also taken concrete actions. Nicaragua ordered the release of 1,700 inmates, and Honduras notified 200 individuals that they won’t need to return to prison from house arrest as originally planned. Other countries, such as Argentina, Colombia, Costa Rica, Ecuador, Panama, Paraguay, Peru, and Puerto Rico, are evaluating similar measures. The challenge for governments is to determine who can be released while safeguarding public safety, and how. Current efforts would only apply to non-violent offenders over a certain age limit who belong to vulnerable groups. Additionally, some countries have also implemented stricter cleaning and disinfection regimes, increased monitoring of potential cases, and created or adapted areas in or by prisons to isolate confirmed cases.

Even though several Latin American countries are proactive and implementing sound measures, there is still a lot that could be done. Governments need to make sure that they follow the UN guidelines and respect inmates’ rights. Given the high levels of overcrowding, social distancing measures are only feasible in well-managed open-air prisons. Additionally, the debate around releasing prisoners is politically charged and few governments seem to be willing to take concrete action. Governments need to prioritize the health and well-being of those most at risk. Social unrest within prisons will only expand to other prisons and regions unless better communication channels are established and inmates’ rights continue to be respected. Unfortunately, inmates face a completely different reality, one that makes them increasingly more vulnerable as this crisis advances, and governments need to make their well-being a priority.

In the second blog post of this two-part series, we will review the literature on economics of crime regarding the impact of drastic reductions in prison populations on two critical issues: public safety and the link between labor markets and recidivism. More to follow soon.

[Editorial note: A detailed list of sources for this piece can be found here.]

Pedro Esteban Rodríguez is a Research Fellow at the Research Department of the Inter-American Development Bank (IDB). His work focuses on the evaluation of public policies within developing countries centered around development, environmental economics and the economics of crime. He holds a BA in Economics from Bryant University and an MSc in Economics from the University of Essex. Prior to joining the IDB, Pedro worked as a consultant for the Ecuadorian Institute of Social Security and several pension funds.