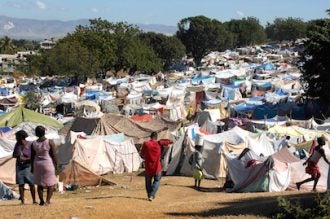 In the aftermath of the devastating earthquake which struck Haiti in 2010, killing more than 220,000 people and leaving 1 million homeless, governments and multilateral organizations gathered in New York to pledge an unprecedented $10 billion in emergency aid and long-term reconstruction.   “Our goal is not to rebuild.  It is to build back better,” said then U.N. Secretary-General Ban Ki-moon. By the end of 2012, however, only 62% of the promised aid had been disbursed. Streets were still littered with earthquake debris, and thousands of people continued to scrounge out an existence in tent cities. Today, many are still living in camps, and less than 5% of the distributed aid, according to some estimates, has been spend on preparedness measures like early warning systems and retrofitted infrastructure that might ease the shock of future disasters.

In the aftermath of Hurricane Matthew, it is worth remembering the lessons of that earlier calamity. The international community’s attention span is short. Disaster relief is usually insufficient, and it is rarely dedicated to measures that will make a country more resilient in the long run. If countries are to withstand natural disasters and rebound, they need to develop the capacity to do it largely by themselves. The best thing the international community can do is help them get there.

Hurricane Matthew again shows how difficult that will be. Winds estimated at 145 miles per hour pounded Haiti’s southern coast, killing nearly 900 people, toppling more than 90% of the homes in the area, and decimating crops and livestock. Tens of thousands of people were reallocated to shelters, or worse, remained exposed to the elements for months. Total damage is estimated at close to $2 billion. Yet, as of late October, less than 20% of the United Nation’s request for $120 million in emergency assistance had been met. Haiti, it would seem, is suffering from donor fatigue.

Is this politics? I think not. Research done by my colleagues and I at the IDB have explored the political-bias critique of international aid and found it largely without merit. Poorer countries are not shunted aside, compared to wealthier or more politically and strategically important nations. In fact, they often get greater help. But assistance is limited. In an examination of 98 cases of natural catastrophes between January 1970 and June 2008, we found a median increase in Official Development Assistance to stricken countries of 18% compared to the previous two years. That amounted to only 0.25% of those countries’ GDP and 3% of estimated economic damages. Moreover, some of that aid had already been granted; it was simply reallocated to humanitarian assistance from other sectors where it had been assigned before.

Boosting those levels of assistance is crucial, but the challenges are daunting. Haiti is the Western Hemisphere’s poorest country, with an estimated 6.3 million people, or 67% of the population, living on the equivalent of US$2 per day. It has the highest levels of inequality in Latin America and the Caribbean, and it has a history of political stability and governance issues that have defied progress in even the best of times. It also has formidable geographic, climate and environmental elements. It sits on a major fault, the source of numerous earthquakes, and lies squat in the Caribbean’s Hurricane Belt, a system of fierce downpours and powerful storm surges. Its extraordinarily high deforestation rate – a product of the poor’s need for charcoal — has stripped it of the vast majority of its forest cover, causing rains to rush down bare mountains, transform into landslides, and leave nothing behind but infertile soil.

Haiti is also small, a disadvantage for countries struggling with post-disaster relief. Sri Lanka, for example, has more difficulty dealing with the aftereffects of a cyclone than India, because it is unable to readily mobilize resources from distant and unaffected areas, or resettle displaced people like larger country can. Smaller developing countries also tend to have less diversified economies. They usually don’t have sectors that can take up the slack and even expand to make up for others that have been hard hit or wiped out. That is especially true for agriculturally-dependent countries like Haiti that that have few options when coffee, cocoa and other plantations are uprooted. All of these factors can seem overwhelming to potential donors. They make the building of disaster preparedness in Haiti among the most difficult undertakings in the world.

Nonetheless, it is worth examining what such resilience can look like for an emerging economy committed to developing it. On February 2010 an earthquake measuring 8.8 on the Richter scale struck followed by a tsunami stuck Chile. More than 500 people were killed, more than 1 million displaced, and economic losses soared to US$30 billion, or almost 19% of GDP. Yet for the magnitude of the earthquake – the fifth largest since 1900 — those losses were light compared to those in Haiti just six weeks before. The explanation lies in good governance, rule of law, and far-reaching planning. Chile had laws in place that established strict building codes and made building owners liable for losses resulting from poor construction. It had a strong network of decentralized emergency personnel that could mobilize without commands from the cut-off capital. And it had a tradition of sound macroeconomic management that allowed it to increase its saving rate by 11 percentage points between 1985-2012 compared to 1960-1984 and gave it the “fiscal space” to rebuild and get back on its feet without relying on foreign aid. Chile is a much richer country than Haiti. But it has worked to become so and built up that resilience over decades.

With climate change upon us, and hurricanes, storms, and even drought likely to intensify in Haiti, the need for action could not be more urgent. For Haitians and for the international community that means not only helping to design and implement better building codes; fashioning a better early warning system, and strengthening emergency response. It means implementing adaptation strategies like reforestation and the construction of seawalls. It means bolstering political institutions, so that politicians are held accountable when they fail to protect vulnerable populations. And it means forging a stronger economy, so that the country can ultimately count on a cushion in time of natural disasters rather than having to rely on stinting and fickle donors.

In 2010, Haitians grew desperate watching hundreds of foreign government and non-governmental agencies deliver aid in an uncoordinated and haphazard manner without so much as consulting their local partners. In the aftermath of Hurricane Matthew, it is time to help build better capacity in Haiti so that Haitians can help themselves when the next hurricane or earthquake strikes.