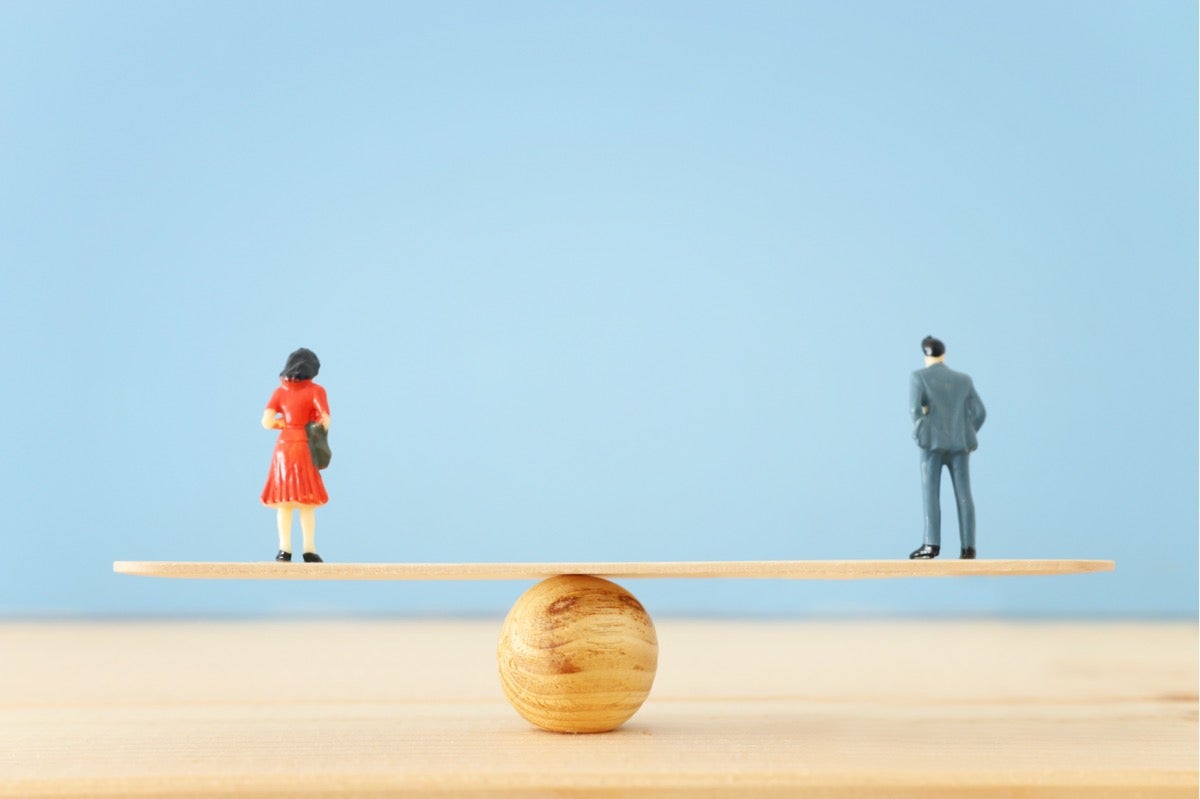 Over the last 30 years, women have made significant gains in Latin America and the Caribbean. Maternal deaths in childbirth have dropped by more than half, young women are slightly more educated than men, and the region recorded the highest rate of convergence between male and female labor force participation from 1990-2015 compared to other regions of the world. But glaring gender gaps remain in areas ranging from labor stability and wage differences, to the highly unequal distribution of unpaid work related to household chores and childcare, and widespread domestic abuse. And the Covid-19 pandemic may be further undermining women in these areas, revealing a deep need to address their situation amidst one of the greatest economic and health challenges in generations.

Evidence from the United States suggests that in developed countries, the pandemic is disproportionally affecting women’s place in the labor market, as they tend to be overrepresented in the hardest-hit sectors such as services, education, leisure and tourism. The same appears to be true in Latin America and the Caribbean. As is clear from the recent IDB/Cornell Coronavirus Survey and Figure 1 below, single women are more likely than single men to report that at least one adult in their household lost their source of income. A similar, though smaller, gap exists when it comes to married female respondents relative to married male respondents.

Figure 1: Average percentage of working-age respondents who lost their job or closed their own business during the month prior to the survey by gender 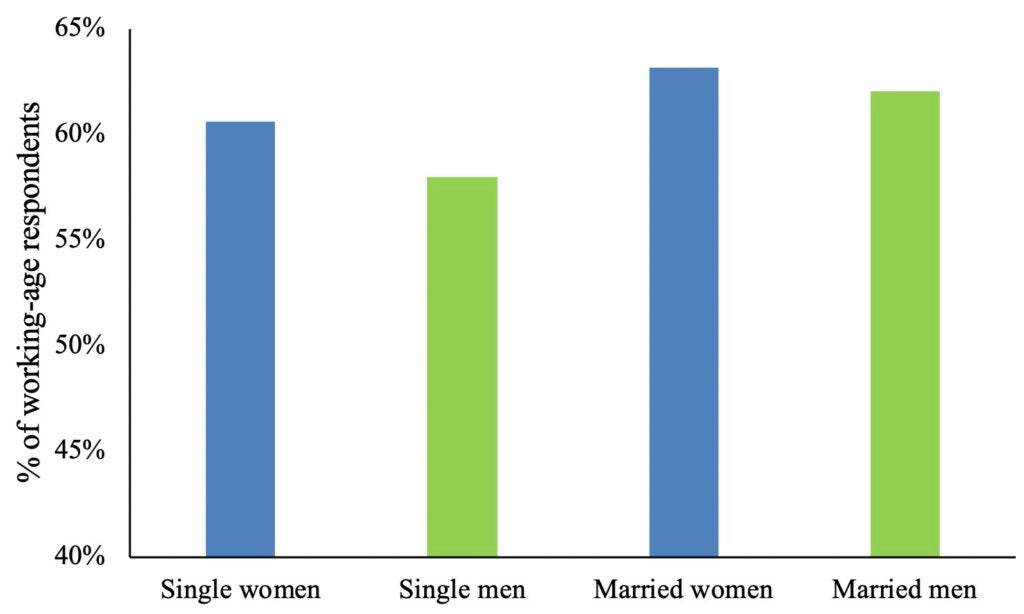 Note: Regional average of the percentage of working-age respondents (18-64) who report that at least one family member has lost their jobs or closed their own businesses at the request of local authorities or due to lack of demand, the month prior to the survey. Average for LAC based on the 17 countries included in the survey, excluding Chile.

More Than Just the Labor Market

This, moreover, is not just a reflection of the labor market. It also has to do with choices made within the household as families adapt to the shock of the pandemic, with gender roles having a significant impact. During the lockdown, for example, the load of housework, childcare, and care for elders increases, and women may be expected to shoulder much of the extra work because of their perceived role as principal caregivers. A recent survey in the United Kingdom suggests that, relative to fathers, mothers lost their jobs more during the lockdown.  But they have also taken on the largest share of additional time needed for household chores and childcare.

The picture is even gloomier in Latin America and the Caribbean. The time devoted to household chores was even more unequal before the pandemic. During the lockdowns, women have been exclusively responsible for unpaid household labor in numerous areas, according to data from the IDB/Cornell Coronavirus Survey. For instance, while two-thirds of female respondents said they were exclusively in charge of cleaning and cooking chores, less than a quarter of men said so (see Figure 2). Women also have borne most of the increased burden of childcare: Almost 60% of female respondents said they were exclusively responsible for home-schooling their children, compared to only 14% of men.

Figure 2. Average Share of Respondents Who Are Exclusively Responsible for Household Unpaid Work During Lockdowns, by Gender 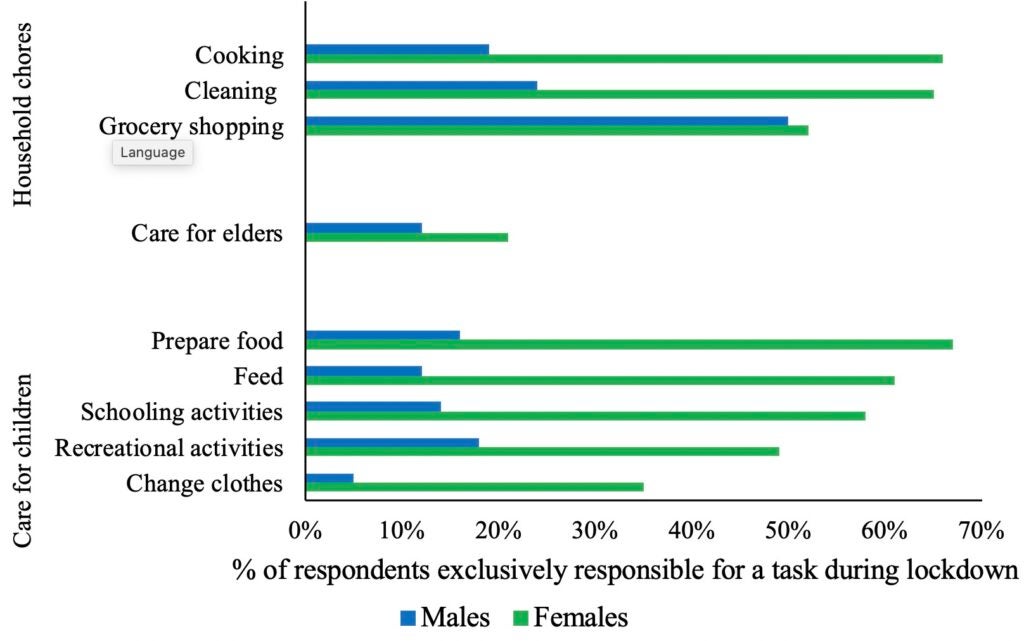 Note: For female and male respondents separately, the average share of respondents who declared to be exclusively responsible for each household chore is reported.

The pandemic, in other words, has not encouraged men to participate more in household chores.  Quite the opposite: the unequal distribution of these tasks has seemed to worsen, further jeopardizing gender equality in the region.

Domestic Abuse During the Covid-19 Crisis

Women have also faced greater vulnerability to emotional, physical, and sexual abuse during the lockdowns. On the one hand, their lost income may reduce their bargaining power at home. On the other, the sudden surge in the level of interpersonal contact in homes, the forced isolation, and the added stress and anxiety from both the health crisis and the loss of income exacerbate household conflict and domestic violence.

During lockdowns, there is less access for women to support systems and ways to report and escape situations in which they are victimized. Several governments in the region have recorded large increases in the number of calls to abuse helplines.

Of course, measuring the prevalence of domestic violence is usually a difficult task, prone to multiple misreporting issues. On one hand, growth in the number of calls to support lines is probably accompanied by a reduction in the number of in-person formal complaints. And during a lockdown, accurate remote reporting is even more difficult because of the sudden and dramatic loss of privacy in the home. Nonetheless, the recent IDB/Cornell Coronavirus survey showed that on average, 15% of women experienced an increase in domestic violence during the previous week, relative to regular (non-lockdown) times. This is consistent with results documenting an increase in intimate partner violence in rural Uganda and Argentina.

As shown in Figure 3, lower income women are more likely to experience worse conflict and violence at home at home during the health crisis.

Figure 3. Percentage of Women that Report Increased Conflict and Violence at Home

Note: Share of households that report that conflict and violence in their household has increased relative to pre-pandemic times.

Recent studies allow us to better understand the way in which violence manifests during the crisis.  An ongoing IDB study for Argentina exploits variation in the timing of lockdown policies and shows that the confinement led to a substitution of physical violence for psychological violence. A study in the US, meanwhile, suggests that the pandemic unlocked episodes of domestic violence even in families without a pre-existing history of intrahousehold violence, suggesting that the pandemic leaves a heavy psychological footprint.

The Need for More Study on Covid-19 and Gender Gaps

Recovery policies will require addressing gender gaps. And they should require studies on whether the pandemic or other economic crises strengthen or weaken gender-biased social norms, including with regard to labor.  For instance, in the coming phases of economic reopening, women will be at a disadvantage if childcare services and schools remain closed, as they will be less likely to return to the labor force. Indeed, recent model-based studies suggest that working women may be more likely to lose their job due to closures of childcare and schools. That means that as we work on the recovery agenda, we need to put forward studies that make use of newly available data to document the causal link between child-care and school closures during the crisis.

Latin America and the Caribbean has advanced on several women’s issues in recent years. But it needs to do much more. Governments need to emphasize more than ever policies that close the various gaps between men and women. We cannot afford to waste years of progress.