A few weeks ago, I wrote a post for this blog discussing the Imperial College’s COVID-19 model, the model that has had the most significant impact on the public policy response to this virus. The post looked at the consequences—terrifying, for sure—of doing nothing, along with the impact of a series of mitigation and suppression policies on demand for hospitals and on the death rate.

A key concept of the analysis was the idea of herd immunity. In the absence of a vaccine, which is still far off, exposure to the virus gives people immunity. The higher the percentage of the population that has been infected but that no longer is, and is therefore immune, the lower the probability.

According to the Imperial College model, herd immunity raises the following dilemma: the more successful the initial suppression policy—stay home, close schools and businesses—the fewer people become infected, meaning that herd immunity is weaker and the illness’s subsequent rebound is stronger. A comparison between the green and orange lines in this graphic taken from the Imperial College study shows this clearly. 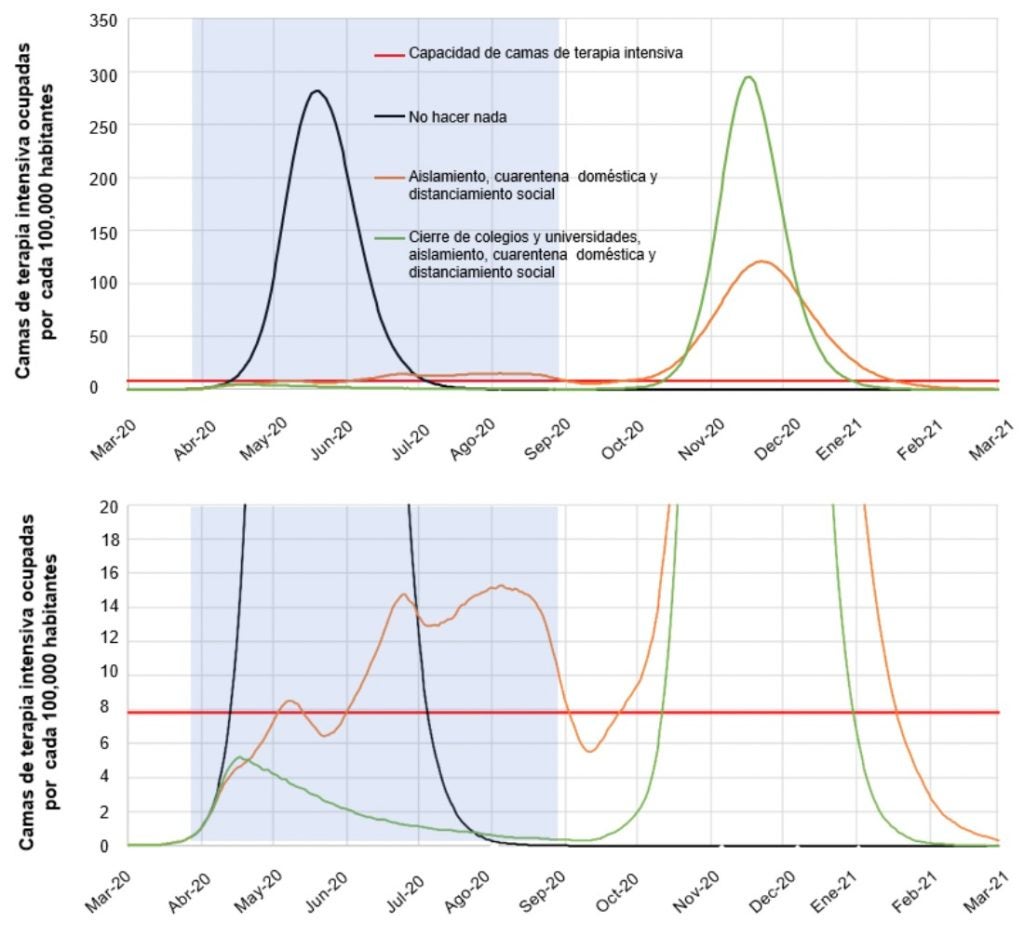 But haven’t we already developed some degree of herd immunity? A recent study by a team of epidemiologists from Oxford University, not yet published, suggests that the answer is yes. The paper starts from the premise that statistics on confirmed cases are a very imprecise measurement of the number of people who have been infected. This is no doubt the case. Where tests are hard to come by, the number of individuals infected will be vastly underestimated. Also, when the test is only applied to people with symptoms, those who are infected but asymptomatic are not being counted. Naturally, this means that measurements like the ratio of the number of COVID-19-related deaths to the number of confirmed cases (called the case fatality rate) overestimate the virus’s true mortality rate.

The question is, how big is the population of people who have been infected but have not had their infections confirmed? How many people are already immune without knowing it? According to the Oxford study, this number could be enormous. Using data on deaths in the United Kingdom and Italy, the study estimates the total number of people infected using certain assumptions regarding the average number of people that each infected person will infect while ill (R0), the proportion of the population at risk of severe infection and death, and the time it takes a case to go from infection to death. The results, of course, depend on the parameters selected, but they suggest the possibility of a massive rate of infection. This has drawn significant attention from the media, with shocking headlines like this one from the Financial Times suggesting that 50% of United Kingdom residents could already be infected.

Obviously, if this were true, the implications would be extremely important. Because of the herd immunity that this would have produced, lockdowns could end much earlier and people could return to their jobs and children to their schools, while still protecting older persons and people with pre-existing conditions. Also, the economic costs of the pandemic would be much lower.

But how can we know if this is the case?

The Importance of Antibody Tests

The answer is antibody tests, also known as serological tests. How do they work? People who get the virus develop antibodies, which are proteins produced by the immune system to attack foreign substances recognized as threats, such as the coronavirus. These antibodies are not generic—rather, they are tailored specifically to each virus. Even in cases in which the virus does not produce symptoms, the antibodies remain in the bloodstream, indicating that the virus was there. Thus, in contrast to the RT-PCR tests used thus far that detect the presence of the virus and tell us if an individual is infected, antibody tests tell us if the individual was infected. The distinction is key to considerations of ending the lockdowns.

Assuming that an individual who was exposed can neither infect others or be infected by others—the key assumption behind the concept of herd immunity—the test would enable everyone who has been infected and recovered to return to their normal activities without risk of causing a new outbreak. If the number is large enough, everyone except for the most at-risk population could return to normal life, as the risk of infection would be much lower. Just as a vaccination protects not only the vaccinated but also the general population, the existence of a mass of people who have been infected and recovered would have a similar effect.

The good news is that these tests are not science fiction. Although they have not been available until very recently—because, in contrast to the PCR tests, they must be designed and manufactured from scratch—they are now in the process of being deployed. San Miguel County, in Colorado—where the Telluride ski community is located—is working with biotech firm United Biomedical, which has developed a coronavirus antibody test. The idea is to test all residents (about 8,000 people) with the aim of returning to normal as soon as possible.

As part of its strategy to end the lockdown, Germany is considering conducting mass antibody testing and issuing certificates of immunity. The certificates would exempt those who have been infected and recovered from the restrictions associated with the lockdown, enabling the country to get its economy rolling.

It must be noted that, regardless of the fundamental contribution antibody tests may make, they are not a panacea. Although they can detect whether someone has been exposed to the virus, producing antibodies is not immediate and can take more than a week. Thus, for an individual whose infection is in its early stages, it would not be detected by the test. This is why it has been suggested—for example, in this article by Dewatripont et al. (2020)—to do a two-part test. If a person receives a positive antibody test and a negative virus detection test, the person would, in principle, be ready to return to normal life.

However, there is a lot we still don’t know. While the idea that an individual who was exposed could neither be infected by nor transmit the virus is a reasonable assumption, it can only be confirmed over time. We also don’t know for sure if the immunity that comes from exposure to the virus will be long-lasting or short-term, or what degree of herd immunity is required for the virus to begin disappearing. Early experiences in the use of serological tests like those in Germany or San Miguel County could be very useful for beginning to answer these questions.

Could Latin American and Caribbean countries produce, deploy, and administer these tests on a mass scale, allowing the bulk of the immune population to return to work? To a certain degree, most countries in the region already have experience with antibody tests, which are done routinely. All HIV tests are antibody tests, and requirements for donating to a blood bank also include serological tests. Additionally, the process of extracting a drop of blood, which is all that is needed for these tests, is much simpler than conducting a nasal swab, which involves much greater risk of transmission of the virus and therefore requires N-95 masks and other personal protection equipment that is currently in short supply throughout the world. Lastly, serological tests are less expensive, quicker, and easier to administer at point of care. They are also less demanding in terms of the reagents, the equipment needed, and the technical complexity of the processes involved compared to tests to detect the virus, which need real-time PCR machines that are relatively expensive and sophisticated (generally centralized in our countries), as well as much more complex logistics.

Despite these advantages, it is not clear that the countries of the region would be able to deploy these tests on a mass scale, at least not in the immediate future. While testing capacity remains limited, a two-part strategy could be implemented, as proposed by Dewatripont et al. (2020). In one part, antibody tests could be performed on randomized samples of the population (also see Stock, 2020). This would establish the percentage of the population that is immune, and thus whether existing herd immunity is sufficient to begin returning to normal. The second part would prioritize testing for doctors, nurses, people working in nursing homes, first responders, and those providing other essential services. These workers, who are in the line of fire, are at much higher risk of infection than the rest of the population. Especially in virus hotspots, a disproportionate number is infected, endangering other patients, their colleagues, and their families. Once it is confirmed that they are no longer susceptible to infection, these workers could quickly go back to work caring for the sick and the old, without risk of infecting or being infected. Should it be necessary, they could even be deployed to other hotspots of virus outbreak, just as China sent 40,000 health workers to Wuhan with all their personal protection equipment.

The decision of when and how to return to normal after the pandemic will not be easy. One key element? It’s obvious: serological tests.

Editor’s note: The author thanks Dr. Daniel R. Kuritzkes, Professor of Medicine at Harvard Medical School and Chief of the Division of Infectious Diseases at Brigham and Women’s Hospital in Boston, and Dr. Eileen Scully, assistant professor of medicine at the Johns Hopkins School of Medicine, specializing in infectious diseases. Both were consulted for this post. Thanks also to Alicia Stein and Matias Busso for their valuable comments. Any errors are the author’s.