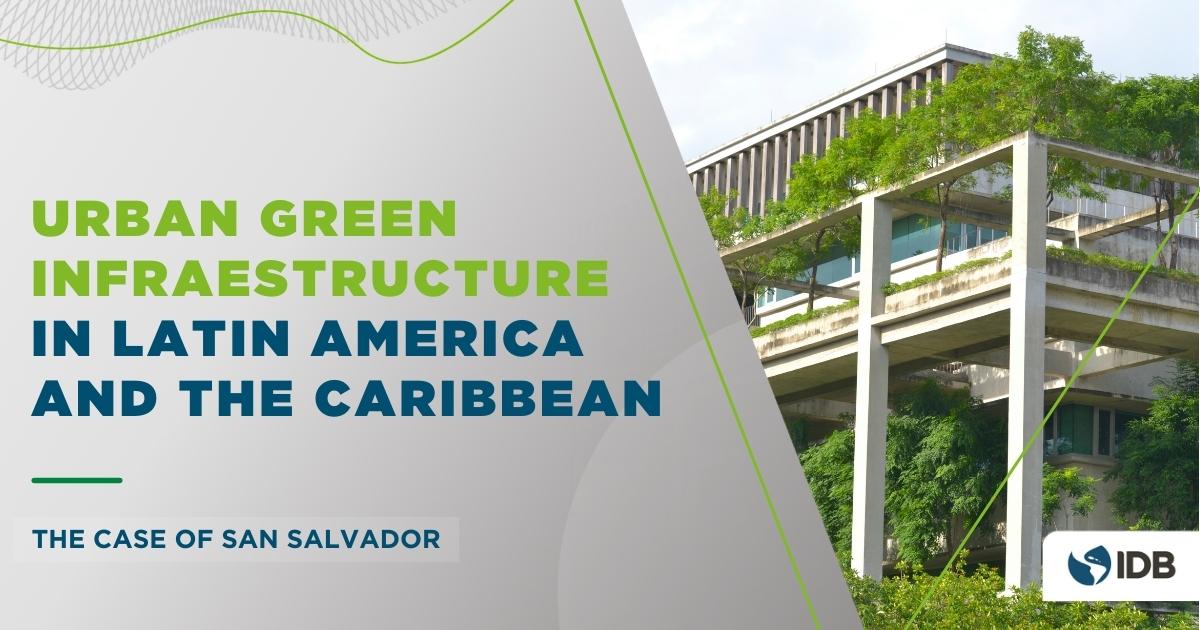 The cities of our region are called to play a key role in the fight against climate change and achieve the Paris Agreements and COP26 goals. As we mentioned in the first blog of this series, the Urban Green Infrastructure (UGI) is one of the best tools through which the municipalities of Latin America and the Caribbean (LAC) can adapt and mitigate the climate crisis in line with the objectives of Vision 2025 of the Inter-American Development Bank (IDB).

In today’s blog we share the experience of several municipalities in our region, the Metropolitan Area of ​​San Salvador (AMSS), applying UGI solutions with the aim of providing ecological, economic, and social benefits to its inhabitants. We hope that their example can serve as an inspiration for many cities in LAC.

Why is this type of tool necessary in the cities of the region?

The cities of our region are increasingly exposed to climatic disasters such as floods, heat waves, droughts, or storms. The UGI can complement climate change policies carried out by LAC cities by improving risk management and resilience, promoting sustainable urbanization, and restoring degraded ecosystems with all that this entails.

The IDB is aware of the efforts made by the municipalities of our region to respond to these challenges.. To respond to them, the IDB has recently published three manuals that can provide fundamental support to governments and urban service providers in making decisions about the most appropriate type of green infrastructure solution, evaluating the cost-benefit and act in accordance with the current regulatory framework. Likewise, these manuals are a first step to start mainstreaming the UGI in the planning codes, budgets and territorial ordering documents. Download them HERE to find out how your municipality can be the next one to adapt to the effects of climate change through UGI and nature-based solutions (NBS):

Why the Metropolitan Area of ​​San Salvador?

The AMSS municipalities have environmental problems like those of other LAC cities. However, the AMSS took a step forward and decided a few months ago to work hand in hand with the IDB to review its urban initiatives, to expand and systematize the inclusion of the UGI. Special attention was paid to the Safe Pedestrian Environmental Networks (RAPS) program, the public spaces program, the green and blue mesh program, and the Sustainable Urban Drainage Systems (SUDS) program.

How is the Urban Green Infrastructure being applied in the Metropolitan Area of ​​San Salvador?

After having diagnosed the programs and their manuals, the AMSS developed a strategic action plan. This was complemented by workshops aimed at the technicians of the programs with the objective of formalizing the implementation of the plan. The workshops included a battery of specific actions within an action plan for each urban program.

Like any project, the AMSS faced challenges. Today we share four of them, which may be useful for other municipalities in the region that wish to start the same process of transversal inclusion of UGI in their city.

Both the users, as well as the actors in the urban space must realize that they “own” the public space. It is an essential condition to ensure interest and maintenance of investments. A good practice proposed for the AMSS b is campaigning through neighborhood associations, schools, and other local bodies.

With UGI, the challenge comes from the lack of baseline data and pre-intervention data. For this reason, the work must be carried out by defining a system of indicators (environmental, social, and institutional) that allow evaluating the performance of the solutions and comparing it with the initial situation. In case this is not possible, it can be done with a similar context in which there is no intervention.

There is potential for improvement so that the technical managers in the region, as well as the authorities involved, know the UGI and its management in the AMSS. Therefore, it is necessary to continue holding workshops so that those responsible at all levels are trained and committed to its implementation.

Economic quantification is one of the most significant challenges that local governments face in carrying out UGI projects. Several methods are currently applied, some of them estimates, which show reference values. Some of them are detailed in the next section.

How to quantify the economic costs of implementing UGI projects?

Based on the experience of developing an UGI strategy in the AMSS, we share some of the ways to quantify the cost savings derived from carrying out UGI projects in your city:

With the commitment of the Metropolitan Area of ​​San Salvador, the IDB was able to apply the Nature-Based Solutions guide to a territorial entity, developing a strategy, training, and a roadmap for a pilot.

At the IDB’s Housing and Urban Development Division, we aspire to implement UGI solutions comprehensively in urban interventions throughout the region in the medium term. These can be through purely green solutions, or through hybrid solutions in which the traditional infrastructure is complemented. If you know of any initiatives in your city from SBN or UGI, do not hesitate to share them in our comments section. We will be happy to read you.