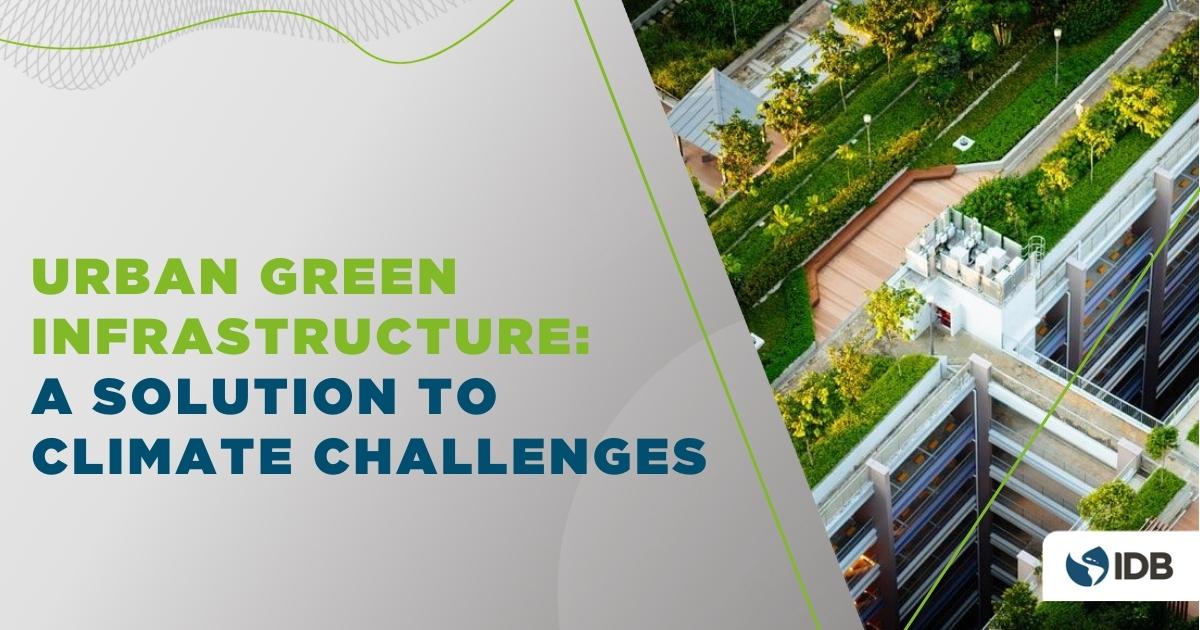 Cities and Resilience to Climate Change

Did you know that, even though cities represent less than 3% of the habitable surface of the planet, they account for 75% of global CO2 emissions? Although this may seem like a problem, it is actually a great opportunity, since cities, in addition to being the economic and social engine of our region, are called to lead the fight against climate change.

At the Inter-American Development Bank (IDB) we are aware of the importance of cities in achieving the Paris Agreements and COP26. For this reason, and in line with our 2025 Vision, at the Department of Housing and Urban Development we work to identify projects and financing that support adaptation and mitigation solutions to the growing effects of the climate crisis in Latin America and the Caribbean (LAC). One of the ways cities can achieve this goal is through urban green infrastructure (UGI) and nature-based solutions.

Nature-Based Solutions and Urban Green Infrastructure: how can they benefit cities in the region?

UGI is a tool that provides ecological, economic and social benefits through this type of solutions. In other words, UGI provides a network of urban interconnection with nature, semi-natural areas and green spaces, which provide ecosystem services that support human well-being and quality of life.

The incorporation of the UGI to cities and urban centers can bring numerous benefits that respond to the climatic threats they face, which include increases in temperature and heat islands, droughts, floods, erosive processes, and loss of biodiversity, among others. For this, the IVU can be conceived as corrective actions on pre-existing situations or be included in urban planning and design of operations.

What is the potential of Urban Green Infrastructure?

The incorporation of UGI in cities and urban centers can provide numerous benefits, such as the sustainable management of stormwater, reducing the impact of heat waves and regulating temperature, improving air quality and water quality, mitigate the effects of drought, dampen noise, increase biodiversity, reduce erosion processes, as well as provide cultural services.

Many cities in the region have been implementing UGI solutions for years, which are success stories of reference. Currently, we can identify from small-scale projects such as the flood gardens in Sao Paulo that collect rainwater and surface runoff and purify it, to pilot green roofs in public schools in Buenos Aires that have contributed to improving regulation thermal, noise reduction and the provision of educational spaces. At an international level, we can find examples where the UGI has been integrated on a large scale, such as the so-called sponge cities in China, designed so that the entire surface of the cities has the capacity to filter and manage rainwater, preventing flooding, and such as the planning of green spaces and green corridors in London to improve biodiversity, increase the well-being of citizens and enhance climate resilience.

Regarding the comparison with the gray infrastructure, one of the most outstanding cases is found in the Metropolitan Area of ​​Asunción, where it was estimated that the cost of a traditional drainage and sewage system that avoids all the material and human damage of the floods was of US$1,986 million. Bearing in mind that one of the strongest storms in recent decades left in the city of Asunción in 2015 the equivalent of 9,360 m3 of water in 2 hours, and considering that a rain garden project with a capacity of 45,000m3 of water has At an approximate cost of US$3.6 million, the cost of UGI is very low compared to gray infrastructure, as long as the city has the infrastructure to channel the water to the rain gardens.

Cities, infrastructure service providers and civil society lack the capacity and resources to integrate NBS into their processes and projects. Therefore, these projects are unable to access private financing and development investments, according to a recent IDB study on the current state of NBSs in LAC.

The mainstreaming of urban green infrastructure in planning is a challenge. Update and formulate new regulations regarding the management of rainwater, the change of land use in flood zones, expansion of the area of ​​green spaces per inhabitant, introduction of tree species to reduce the effects of the heat wave, These are some of the modifications to the current regulation that are on the agenda in the region.

To respond to these challenges, the IDB has recently published three manuals that can provide essential support to governments and urban service providers in making decisions about the most appropriate type of green infrastructure solution, evaluating the cost-benefit and act in accordance with the current regulatory framework. Likewise, these manuals are a first step to start mainstreaming the UGI in the planning codes, budgets and territorial ordering documents.

The first of the three manuals, provides a list of international case study examples of urban green infrastructure solutions. These examples expose the problem and how a particular UGI solution was chosen to solve the climate threat.

The second manual compiles a series of technical sheets with some green infrastructure solutions, including information on the ecosystem services it provides and the economic benefits generated by its adoption. Solutions include green spaces, corridors, urban parks, tree canopies, green linear transportation infrastructure, rain gardens, and riverside parks, among others.

In the third manual, a group of countries is analyzed when implementing nature-based solutions.

In the next blog of this series, we will address how the Metropolitan Area of ​​San Salvador made the decision a few months ago to work hand in hand with the IDB to review its urban initiatives, to expand and systematize the inclusion of the IVU. Do not miss it!

Hector Cordero Irigoyen is a climate change and urban policy consultant at the Climate Change Division. In his role at the IDB, he currently supports various divisions and national governments to design, structure and implement investment projects. His work focuses on mainstreaming climate change measures in loan operations and technical cooperation grants in Latin America. His work also includes research and technical support on innovation for blue economy, nature-based solutions, and ecosystem conservation to provide policy recommendations to country governments in the development of national policies and NDCs. Before joining the IDB, Hector worked for the 100 Resilient Cities Program of the Rockefeller Foundation, providing support to several Latin American cities to develop and implement their resilience strategies. He also served as advisor for the Science-based Targets Initiative, a global platform to help companies adopt ambitious climate targets, while working at WWF. Hector holds a bachelor degree in International Relations from the Universidad de las Americas-Puebla and a Master’s degree in Regional and Urban Planning from the London School of Economics and Political Science.