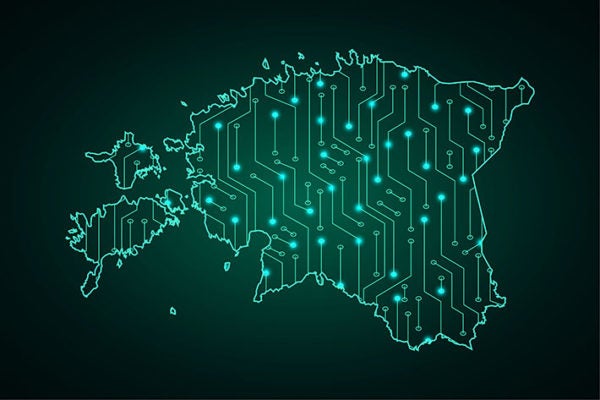 I was lucky to be part of an IDB-led technical visit to Estonia, with a delegation of public officials from our member countries. We wanted to learn about Estonia’s remarkable progress on digital government.

I approached the visit with a mix of expectation and skepticism. I had read a lot about Estonia’s experience but, over many years of working on governance, I learned that country-specific “good practices” can often be exaggerated, and the reality on the field can be disappointing.

Estonia did not disappoint. In fact, I was impressed, although not in the way I was expecting. Estonia is less about flashy tech and much more about making sure the wheels of government work to build an incredible e-government experience.

It is humbling to see some of the things Estonia has achieved. We visited the tax office in Tallinn where rows upon rows of desks didn’t have a piece of paper. You can file your tax return in Estonia with two clicks. The government presents a pre-filed digital tax return, and all you do is confirm whether it is correct. A company can be opened in as little as 17 minutes.

We met Madis Tijk, a doctor and one of the architects of Estonia’s e-health system. “I haven’t used paper in my work in 20 years” – he said proudly.

Contrast this with our government offices overflowing with paper. The comparison can be depressing.

And yet, the Estonians are quick to point out that these achievements have not happened overnight. Estonia has implemented many of these reforms starting in the 90s. Digital health records and e-voting took time to reach the tipping point where a majority of the citizens preferred the online services. Not everything worked out smoothly all the time. Of course, we have the advantage of the experience of Estonia and other global leaders in digital government. We can hopefully avoid some of their mistakes.

So how did they do it?

First off, it’s not about the technology. When one thinks about electronic government, you tend to conjure a smart app or cutting-edge website. The more advanced the technology, the thinking goes, the better the quality of digital services a government can provide to its citizens. Even I, a non-tech specialist, realized the big asset of Estonia is not technological advancement. In fact, colleagues on our delegation pointed out that some of the applications that Estonia relies on are not that advanced, and that some of the user interfaces could be improved.

As we made our way through many government offices, it became apparent that what really elevates Estonia to its status as a world leader in digital government is its governance.

Estonia has a strong, albeit simple, legal framework that defines the scope of its e-government. It emphasizes data protection, with full transparency and accountability on how the government can use citizen data. There are checks and balances to ensure that government agencies accessing the “X-Road” (Estonia’s data sharing platform) have the necessary cybersecurity and data quality standards in place, and an empowered Chief Information Officer, which establishes standards and guidelines without preventing each ministry and agency from innovating and experimenting.

Estonia’s e-governance – and the public administration in general – focuses on the individual. This may sound obvious but too often, as is the case in my native Italy, the center of the government bureaucracy is… well, the bureaucracy itself.

This citizen-centric approach is embodied by the “once only” principle. If the department of motor vehicles knows what cars you own, then it is against the law for the tax agency and other government offices to request the same information from you again. It is up to the government to organize itself so that necessary information is shared between agencies. You are spared the ordeal of submitting the same information again and again.

Like so many innovative ideas, it is simple and yet revolutionary.

Of course, easier said than done, and credit goes to Estonia for translating this principle into practice. The key, in my view, has been to establish strong pillars on which to build a digital government system: a strong national identity system that identifies each person in the country as unique, with a framework for digital signature; a simple framework and tool for data sharing among government agencies, that relies on a strong governance and controls; investment in physical infrastructure for connectivity and data storage; and rock-solid cybersecurity framework, which places the country among the best performers in the world.

I was also impressed by how all Estonians share a common vision. The CIO and the 25 year-old intern at a random government agency have the same message, about Estonia’s vision for electronic government, how they got where they are today – with all government services available online – and where they are going from here. It is a supremely difficult thing to have a bureaucracy speak with one voice, and you can’t help but be impressed.

This vision also extends to the future. At every meeting we were told about how Estonia is moving to the next generation of digital government, where transactions – say a request for a benefit – don’t have to be initiated by the citizen, but are triggered automatically by life events such as the birth of a daughter or son, a health issue, or a new job. Try and envision how a system like this would change the quality of your life for the better.

Is Estonia’s experience replicable? Every country has its unique elements and Estonia is no exception. It has a small, well-educated population that emerged from the Soviet Union with limited resources. It had to run an efficient government.

I noted how Estonians trusted their institutions and each other. For instance, over 80 percent of Estonians have a high degree of trust in the police. This means people trust the government will handle their data wisely, and the general assumption that the government is working for their benefit.

Depressingly, trust is a sparse commodity in many of our countries. However, something that came up in many conversations with the rest of our delegation is that over time you can build trust in institutions. You do so by providing citizens with better and more efficient services. It is a long process, but, as Estonia has shown, it can be done, and it is important for countries to start down that road. At IDB we are proud to be supporting countries in the Caribbean, such as The Bahamas and Jamaica, and Latin America down this path, starting with those foundational elements of electronic government that Estonia has pioneered. For the past four years, the IDB has organized numerous activities with the government of Estonia with the aim of supporting digital government efforts in Latin American and Caribbean efforts. As a promising result of these efforts, several countries in the region are now adopting the X-Road as their interoperability platform and replicating other Estonian digital experiences. We hope this is just the beginning.