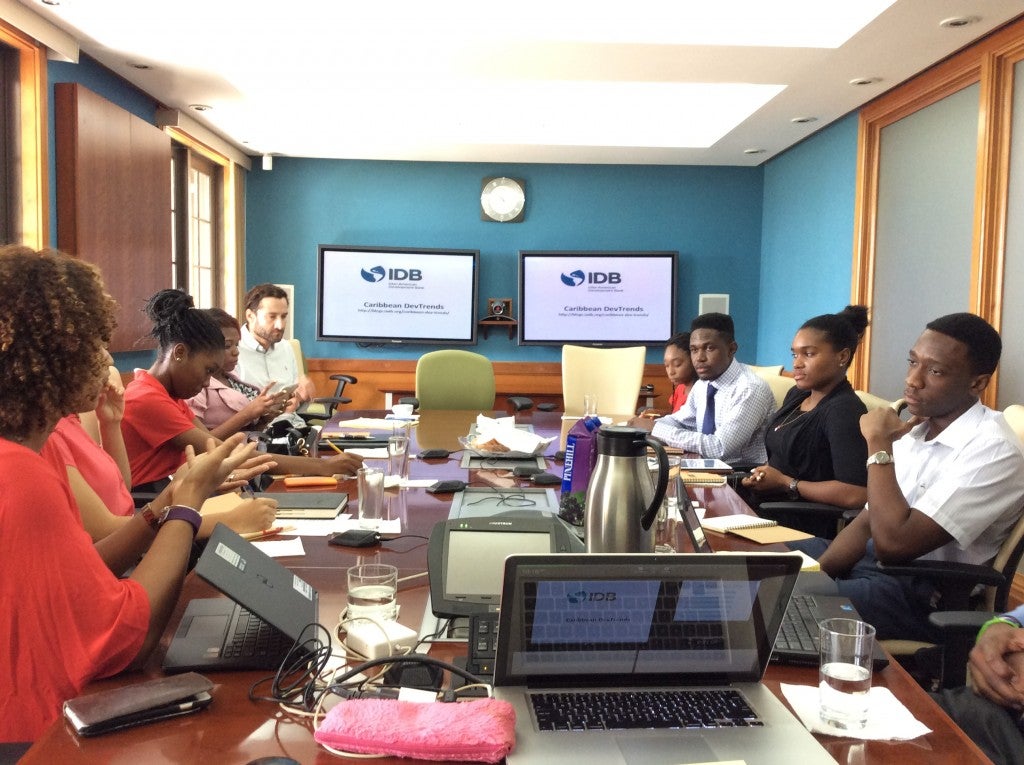 The Barbados Country Office of the Inter-American Development Bank (IDB) is hosting an internship competition for economic students of the University of the West Indies, Cave Hill Campus (UWI). The pilot project seeks to engage young adults, exposing them to the work of the IDB for Barbados, as well as challenging them to develop their communications skills by researching and writing on local economic issues for public dissemination.  The eventual winner will receive a three-month internship at the IDB’s Country Office in Bridgetown.

Ten students were invited to receive an orientation on the IDB’s work, and a training seminar on blogging and writing for the media.  The students who attended this meeting did so having successfully completed phase one of the competition – the submission of an essay on the IDB’s work in Barbados and the Eastern Caribbean.  The eventual winner will be selected based on the quality of the three stories each competitor submits during the next three months.

The students met with senior staff from IDB’s Country Office, including Christel Saab, Chief of Operations, and Camilo Gomez-Osorio, Senior Country Economist along with communications consultant, Pamala Proverbs, and former intern, Shamar Belman, who now works at the IDB as an operations and economics consultant.

Ms. Saab gave students an overview of the IDB’s work on Barbados and expressed her delight to be associated with the competition. “We have a newly approved country strategy for Barbados covering the 2015-2018 period. It reflects the priority areas identified not only by the Government of Barbados, but also by civil society, the private sector and other donors. It is very important that stakeholders like yourselves take ownership and get involved with the work of the Bank as we are keen on receiving and incorporating inputs that will improve the development effectiveness of our operations in the country.  We want to ensure that our projects are truly living up to our mandate of ‘improving lives’ of the people of the region.  Your contribution will help to give life to this mandate,” Saab said.

In advising on the work of an economist, Gomez-Osorio told students that to have a successful and fulfilling professional career one should be passionate about one’s work.  “Take charge of your career path and focus on that area of economics that interests you most.   In development economics, while working for multi-lateral organizations, there are many fields of work that range from analyzing macro-fiscal issues to working with micro-level data within a sector, like education, for example.  However, with time one should aim to gain depth in the understanding of issues within that sub-field through academic studies or professional experiences.  The best piece of advice that I received when I was starting out like you are was to aim to become a specialist and avoid being a generalist, that is a key point I hope you would take away,” Gomez-Osorio emphasized.

The students got to voice their interests and ideas on a wide range of  topics that are relevant to Barbados’ economy, including, energy, water and sanitation, public and private sector reforms, and oversight of financial markets.   They were also trained extensively on how to write press releases and blog posts since their stories are to be submitted for publication on the IDB’s Caribbean regional blog, Caribbean DevTrends.