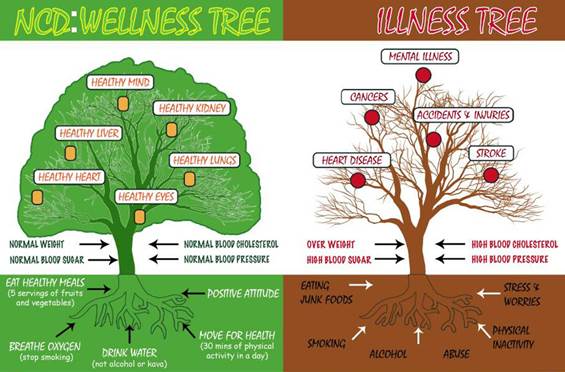 Having recently read an article that presented some damning statistics for Chronic Non-Communicable Diseases (NCDs) in the Caribbean region[1] I reflected on my experiences and encounters regarding my own lifestyle in which I have now committed to incorporate more physical activity into my daily existence. Heart disease, one of the infamous NCDs, commonly referred to as the “silent killer”, strikes like a ruthless sniper taking cherished family members and friends without clear warning. Perhaps the warnings and signs are not observed early enough to be corrected which suggests that much more should be done via public policy and decisions to create the informed environment, the awareness and the know-how to halt and send the NCD “tsunami”, which threatens to erode the quality of life of citizens of the Caribbean, into retreat. Never one to make formal New Year’s resolutions, almost twenty years ago, I made an impulsive but conscious decision to become more physically active. Through the years this has evolved from a mere intent to a passionate commitment to be more active. Like most journeys that one embarks on, personal experience influenced the first step. With a family history of diabetes – one grandmother was an amputee and died from the disease and my father was diagnosed – I was forced to make a personal commitment to adopting a healthy lifestyle.  Also, having practiced a sedentary work and leisure regime in the past had contributed to a slow and steady buildup of adipose tissue around the midsection and, further, “bad” cholesterol in the bloodstream. In other words, I got fat and sluggish!

Yes, the effects of the “office-job” had set-in and the clichéd results were visible: “fat gut” and lethargy. Short walks were literally “breathtaking”—they “took my breath away”. Minimal physical exertion left me huffing and puffing! I had become unfit within a few short months after I started the world of work. This treadmill of life was going nowhere at best or worst trundling towards “a paunch”, possible obesity and ultimately was setting a pace in which some NCD like diabetes and/or heart disease could eventually take me out, like the sniper it is. This may yet happen but, now,  approximately two decades on, I feel as though I have at least delayed the “inevitable”. I say this because I am still well into the battle regarding my discipline towards a more balanced diet. Of course nutrition including the quality, quantity and timing of meals is a critical ingredient in the overall healthy lifestyle. While I do eat more “healthy” than most, I often succumb to temptations by consuming a few more calories than I should and/or eating late at night. However, I shall never give up!!

The costs of doing nothing can be catastrophic. The costs at the individual, national and regional levels are already being felt. The nature and complexity of the scourge that is NCDs make it difficult for the average person to comprehend and recognize that it is an epidemic. The impact cannot be easily visualized like the recent Ebola outbreak that galvanized a regional and global response. It is estimated that 60% of deaths in Trinidad and Tobago can be attributed to NCDs. This presents an enormous threat to social and economic development.

The Caribbean is often viewed as slow to react but in December 2014 Trinidad and Tobago took a bold step in the fight against NCDs with a loan from the Inter-American Development Bank, IDB – Trinidad and Tobago and chronic diseases. This intervention, if successful, will reduce the risk of obesity and being overweight among 260, 000 children and adolescents. It is an example of the type of response that is required to fight the battle against NCDs in the region. Given the statistics for NCDs across the Caribbean, replication is urgently needed. The costs of prevention or activity may be much more palatable than the costs of sitting on your hands and twiddling your thumbs. Be smart, don’t let NCDs take you out!

[1] Recent data indicates that 78% of all deaths in the Caribbean can be attributed to NCDs. Comprehensive Meeting Report: Forum of Key Stakeholders on NCDs: Advancing the NCD Agenda in the Caribbean. 8-9 June 2015. WHO/PAHO