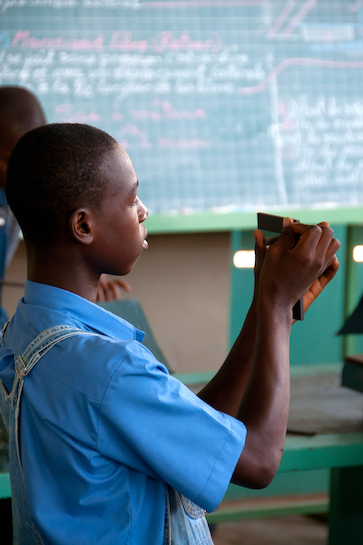 More than one-quarter of the world’s 7.3 billion people are between the ages of 10 and 24, according to a recent UN Population Fund Report. That means there are more than 1.8 billion youth—a historic high—who are actively looking for a job or will be soon. For the most part, developing countries are on the receiving end of this demographic boom, which creates promising opportunities to strengthen the quality of their workforce in order to boost their productivity and economic competitiveness. Unfortunately, most developing countries have not been able to capitalize on this demographic dividend.

According to the International Labour Organization’s Global Employment Trends for Youth 2015, more than 73 million working-age youth (15–24 years old) are unemployed. The report also warns that unemployment at an early age reduces employment options and earnings later in life, leads to lower productivity levels, and may contribute to higher social unrest.
Given its sweeping societal effects, tackling the youth unemployment crisis is a top policy priority for governments across the world:

•  The issue has been embedded into goals 4 and 8 of the 2030 Sustainable Development Goals, which seek to build relevant skills for youth and improve youth employment outcomes, respectively
•  In the last few years, youth unemployment has taken center stage at the annual World Economic Forum, because of its potential to destabilize the global economy
•  The World Bank has just published a report on “Ninis”—the one in five Latin American youth who are neither in school nor working

In Latin America and the Caribbean, youth unemployment hovers around 13%—similar to the global average. This regional average is far less than the 25% in Central Europe and the Baltics, or the 30% in the Middle East and North Africa, the most affected region. However, there is one sub-region in the Americas with dramatically high numbers: the English-speaking Caribbean. One-quarter of Caribbean youth are unemployed—more than 3 times the unemployment rate for Caribbean adults. Young Caribbean women are even worse off, with unemployment rates reaching 30%, placing them in a particularly vulnerable position for risky behaviors such as unplanned pregnancies.

These out-of-work Caribbean youth have had serious socioeconomic repercussions for English-speaking Caribbean countries. In 2013, the excess number of unemployed youth is estimated to have cost Caribbean governments $883.4 million, or 1.5% of their gross domestic product. Unsurprisingly, improving economic opportunities for young people is high on these governments’ agendas. While the causes are varied, one of the priority areas they are tackling is how to address the mismatch between the skills of the workforce and the skills demanded by employers.

Innovative solutions are needed. Some are in the works. In Jamaica, public and private institutions are partnering to improve employability and entrepreneurial skills among youth to meet the needs for skilled workers in sectors with high potential. In Barbados, Trinidad and Tobago, and Jamaica, another program promotes youth entrepreneurship.

In Jamaica, a World Bank project aimed at a total of 15,000 youth seeks to provide training and opportunities for digital jobs, plus seed capital for about 2,000 youth interested in starting their own businesses, in an effort to boost the country’s digital and animation industries. This project, launched in 2014, builds on previous World Bank initiatives Digital Jam 2.0 and 3.0, which helped create youth-led startups in Jamaica and sought to establish the Caribbean as a potential hub of IT, innovation, and entrepreneurship.

Another project in Jamaica has identified business process outsourcing, logistics, agro-processing, tourism, and animation as growing sectors with the potential to absorb skilled youth into their workforce. New Employment Opportunities (NEO) has created multi-stakeholder partnerships with businesses, government, and civil society to provide training services and career counseling to 10,000 vulnerable youth. The goal is to prepare the young people for jobs in more than 100 Jamaican employers in these promising sectors. NEO is a partnership between the Multilateral Investment Fund (MIF) of the Inter-American Development Bank (IDB) Group, the IDB, the International Youth Foundation, and private companies.

In Barbados, Trinidad and Tobago, and Jamaica, the Youth Entrepreneurship Program, set to launch in the coming months, seeks to nurture vulnerable youth who want to start their own businesses. The program, a joint initiative of the MIF and Youth Business International that has been offered in countries in Latin America since 2013, provides an integrated package of support services: training, finance, and mentoring. The goal is to give youth the skillsets to start and grow businesses that respond to market demand. And, with access to mentors from the local business community, youth will have the guidance of people who were in their shoes not too long ago.