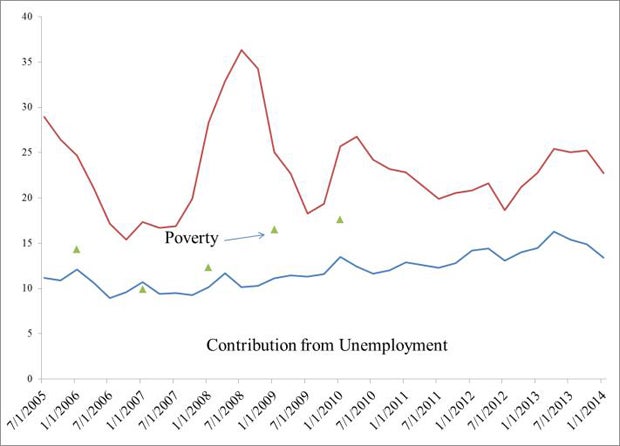 Sources: Own calculations from WDI.

Of the many associations one would make with the Caribbean, misery is probably not the most typical one. However, if we are to trust the Misery Index, all is not well in paradise. The Misery Index is simply the sum of unemployment and inflation, the idea being that it’s not good for you if you are unemployed and it is not good to live in a country where prices go up. The index is probably especially relevant for poorer households who depend on fixed salaries and have fewer assets to hedge a fall in income and a rise in prices. According to this index, the Caribbean is quite miserable, at least compared to the average of Latin America and the Caribbean. Unemployment contributes more than half to the index in all countries other than Trinidad and Tobago, which has higher inflation than unemployment. We also see that Jamaica was quite miserable together with Guyana and Suriname over the period 2010-2012. Actually, Jamaica and Suriname are in the unenviable situation to have quite high inflation and high unemployment.

It is interesting to see how the index compares to another important measure for well-being, the headcount ratio of poverty (Figure 2). It follows it quite closely, especially for strong moves (Figure 2a). As such, the misery index could be used as a proxy for the poverty rate, which is only available once a year and only with a long lag.

Jamaica has quarterly unemployment and inflation, which can be used to track the index with a higher frequency. Since, 2007 the index has mostly been increasing. Unemployment has been going up since the onset of the world economic recession while inflation has varied considerably (Figure 1).

As the title of this blog suggests, we want to stop being miserable, so what is the expectation going forward. Using current forecasts for economic growth (and thus unemployment) and inflation, the benefits from the recovery should continue and trickle down to poorer households. The index should improve as inflation is expected to remain in single digits and employment should increase in line with the uptick in economic activity. How fast this will happen is the more difficult question. According to a recent study , employment will recover only slowly. According to the study, historically the unemployment rate decreases between 0.18 and 0.35 percent for a 1 percent change in GDP.  The small effect on unemployment from GDP growth could be because companies might be slow in expanding their workforce to react to higher demand given the continuing uncertainty. They do not trust the recovery yet.

In addition, the low productivity of Jamaican firms implies that the first reaction to higher demand would be to try to be more productive rather than employing more staff. Nevertheless, some of the better performing industries, including agriculture and tourism, are labor intensive and could contribute quickly to increasing employment. So my prediction is that ‘misery’ will decline in Jamaica and I will check on my prediction in this blog in exactly six months.