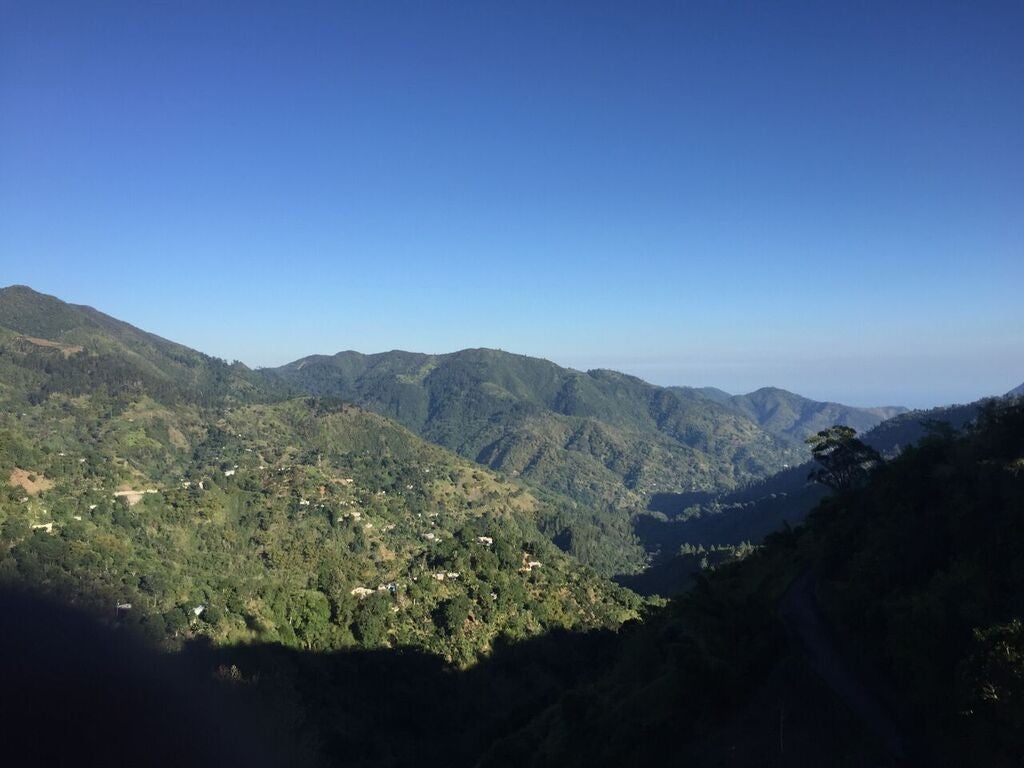 Xaymaca is the Taino name for Jamaica which translates into “land of wood and water” but how much wood and how much water does Jamaica have today?

The Forestry Department figured out a way to teach enthusiastic hikers about the state of forests and watershed management in Jamaica. Every year, a challenging hike is organized in March to explore trails around our world renowned Blue Mountains, named as such because of the azure haze that settles around its peaks. The timing of the hike is also aligned to the observance of International Day of Forests on March 21.

Last week, three of us daredevils at the Inter-American Development Bank (IDB) Country Office in Jamaica signed up to participate in the hike as part of the calendar activities of the Corporate Sustainability Program (CSP). The 2016 Forest Trek, as the Forestry Department calls it, was a 20km roundtrip hike starting in the parish of Portland, walking uphill past several coffee farms, to the Cinchona Botanical Gardens located at 5,000 feet above sea level in the Blue Mountains Forest Reserve.

Enthusiastic and packed with all kinds of power bars, we showed up at the check point ready to walk through the forest and enjoy the panoramic views of the mountain ridges and surrounding forest areas.

Over 55% of Jamaica’s terrain can be described as hilly or mountainous. This feature of its landscape and its extensive network of rivers give Jamaica a distinct beauty for which it is world famous. The entire island may be considered a watershed based on its topography and hydrology.

While we made our way through the limestone forests of the John Crow and Blue Mountains we learned that much of the forest land is on steep or rugged terrain with little access. Because of inaccessibility, only about 26% of the natural forests can contribute to sustained timber production. The prospects for industrial uses of domestic timber for major forest products are minimal. However, according to the National Environment & Planning Agency (NEPA), the use of mangroves and other species from the high forest for fuelwood and charcoal manufacture has been of considerable negative environmental effect, particularly as it relates to watershed degradation.

In Jamaica 19 watershed management units have been declared in critical state, highly degraded and in need of remedial work to return to an acceptable state. The main threats are deforestation due to the clearing of steep and unstable slopes for the cultivation of coffee or yam sticks, road construction, charcoal burning, timber extraction, grazing and cropping. Not to mention, climate change related threats such as changes in rainfall patterns, changes in humidity and evaporation rates, increasing damage from storms and hurricanes, increased frequency and intensity of bush fires and changes to microclimates are also negatively impacting the forests.

It is no wonder that the Forestry Department has recommended that all remaining dry forests island-wide should be set aside for uses compatible with conservation and forest restoration.

Hikers learned about different species of trees like the Eucalyptus shown in this picture.

Terry-Ann Coley-Graham, Country Office Jamaica and Anaitée Mills from the Climate Change Division, IDB,  are seen here about to cross a water drain from the mountain.

It was clear to us that water and forestry need to be brought into the full sustainable development framework. After all, forests and trees are essential for managing the planet’s water. That is the reason for which IDB programs, such as the Adaptation Program and Financial Mechanisms under the Pilot Program for Climate Resilience (PPCR,) are focusing efforts on the implementation of critical adaptation measures around the Rio Minho Watershed, which is one of the most severely degraded watersheds on the island.  Special emphasis is on land conservation, agroforestry, reforestation and climate smart agriculture, among others.

As we completed this long and interesting trek, we understood the importance of creating the right activities to educate and raise awareness among the population, and also the need for close collaboration between development partners and state agencies in the timely implementation of these and other programs for the country´s long term benefit before it is too late.