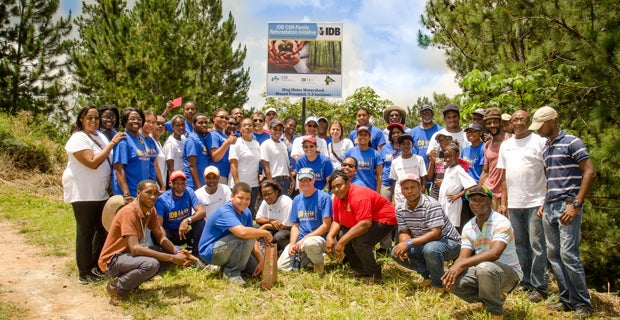 What happened when a group of some 40 persons from the Inter-American Development Bank (IDB) took a trek to the mountains and camped out for half a day?   700 trees got planted!!!

This is exactly what happened on May 3, 2014 when the IDB Country Office Jamaica, in association with the IDB Jamaica Family Association, IDB Corporate Environmental and Social Responsibility Program (CSR),  teamed up for a reforestation project.

These partners participated in the Forestry Department “Adopt-A-Hillside” Corporate Reforestation Programme.  Divided in four teams, they planted Blue Mahoe, Bitter Dansel and South African Yacca seedlings on 1.5 hectares of the forest reserve. The IDB was hosted by Forestry Department personnel who were responsible for identifying and preparing the planting site and providing the seedlings. In addition, they were on hand to provide technical support during the exercise and to oversee a friendly competition. According to Mrs. Therese Turner-Jones, IDB Representative in Jamaica, “The Forestry Department deserves commendations for what is being achieved as this can be counter cultural, since many people do not think enough about the forest and preserving it.” The IDB has also exercised its environmental stewardship by funding a further 237 plants to be planted by the Forestry Department resulting in a whopping 937 seedlings being planted.

The Adopt a Hillside programme not only involves a tree-planting day but includes activities that ensure the plants are taken care of for the next three years.  This project showcases the IDB’s commitment to environmental sustainability and its devotion to fulfilling the IDB Jamaica Office CSR slogan of “Preserving Jamaica’s Environment through Action and Education”. Ms. Tiffoni Buckle, the IDB’s Country Office CSR Ambassador said that the idea of the project was to demonstrate the IDB Family’s commitment by “walking the talk.” Mrs. Donna Williams, President of the IDB Jamaica Family Association noted that participants, young and not-so-young enjoyed the activity immensely.  She stated that the educational benefits of the exercise were substantial, as participants increased their knowledge of the flora of Jamaica. The Family Association provided the logistic support and contributed to purchasing the seedlings, for this worthwhile event.

The trees planted will contribute to Jamaica’s forest cover as well as the absorption of carbon dioxide, emission of oxygen and improvement of water quality and quantity. A hectare of forest woodland can absorb approximately 11 tons of carbon dioxide per year (Forestry Commission UK). It should be noted that the amount may vary depending on the types of trees planted and the density.