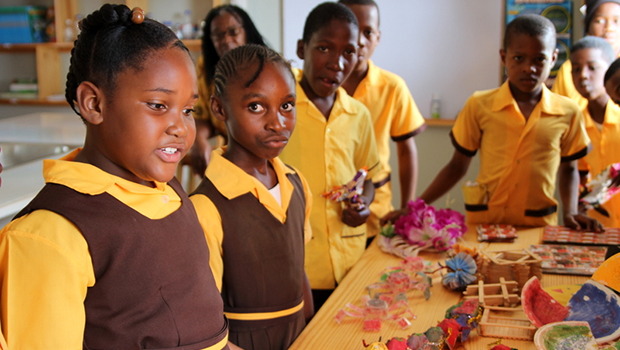 On a recent visit to a Jamaican School, I was transported back in time to my childhood.

I grew up in a rural area. Our house sat in the middle of a quintessentially English village with gardens and fields, a river, rolling green hills which abruptly turn into limestone cliffs and then tumble into the sea. Given my rural upbringing in a particularly beautiful part of the country, I spent much of my childhood running around outside, wading through rivers, climbing trees, picking flowers and even digging up worms for fishing bait. At primary school we learned our three Rs —reading, writing and arithmetic —like everyone else, but school was so much more exciting when we got to go on field trips outside, learning about local fauna, planting trees, and collecting flowers.

Thirty odd years later and 3,000 miles from Mrs. Ethelston’s Church of England Primary School, I found myself visiting the Chandler’s Pen Primary School in Southern Jamaica. What I saw brought me back to my own school days, and I was delighted to see the school’s strong emphasis on hands-on, nature based learning.

Similar in size to many rural Jamaican schools, Chandler’s Pen has just over 100 students from the surrounding local villages. The children learn English, math, science and history, just as I had many years ago. During my visit, as I peered in the back of the classrooms, which reminded me so much of home, I could sense that overwhelming love of learning. When break-time came round, I was introduced by Vice-Principal Lorna Thomas to a pair of students and best friends, Natalia and Debbian, for a VIP tour of Chandler’s Pen’s new Biodiversity Center.

Natalia is an enthusiastic member of the Chandler’s Pen “Environment Club.” The Club has its own biodiversity curriculum, which focuses on using engaging do it yourself, projects to teach students about a range of biodiversity related issues. Students from grades one through nine take part in hands-on activities like bird watching, tree labeling and recycling, and take field trips to local hot spots for biodiversity. With help from the Institute of Jamaica, the Biodiversity Center is also building up its data library and specimen displays with samples gathered by students.

The origins of the Center are particularly interesting. It was established by a partnership between the Institute of Jamaica and the Natural History Museum of Jamaica, with the support of TransJamaican Highway Ltd. The partnership was established as part of a broader suite of environmental and social measures tied to a local highway project. The IDB teamed up with other international lenders to finance 17km of inter-urban highway in Southern Jamaica. It is standard practice for the IDB (as well as other international financial organizations) to require efforts to mitigate and compensate for any damages or losses to biodiversity that might stem from a project it is financing. Since part of the highway runs alongside a protected area, the parties involved agreed on a novel approach to mitigating future impacts: educating Jamaica’s youth about the importance of biodiversity protection in the interest of the country’s long-term environmental sustainability, also featured in the forthcoming IDB Sustainability Report.

On the day of my visit, Natalia and Debbian took me by the hand and walked me around the Center. They showed me their latest project which involved recycling every day household trash, plastic bottles, newspapers and cans into art work. It didn’t take long before we were surrounded by two dozen more students, all eager to share their projects with me, or show me the latest bug they had found and identified, or tell me about the displays exhibited on the Center’s walls. The excitement was palpable as the students led me out into the school grounds and pointed out their favorite insects, plants and birds. The Environment Club has truly brought a love of all things biodiversity to the children of Chandler’s Pen.

A future goal of the Center is to extend the Programme itself to other schools and local communities in the area. In July 2014, the school hosted a Biodiversity Awareness Resource Workshop, in which 33 teachers from 19 other schools came together alongside special guests to discuss how to expand the Biodiversity Programme throughout the area. The Programme’s leaders also hope that the biodiversity curriculum they have developed will ultimately be adopted into the national curriculum in Jamaica, and one day more broadly throughout the Caribbean.