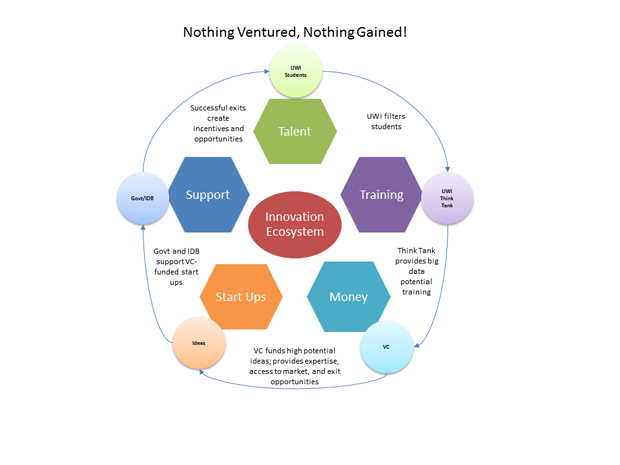 Innovation, the process of making something better, can be a powerful driver of growth. Indeed, for small economies with a high level of human capital like the Caribbean, innovation has the potential to become the cornerstone of development policy. Thus, “innovating innovation” in the Caribbean to create a ‘start-up’ culture, while admittedly ambitious, is a worthwhile goal.

So why haven’t the Caribbean countries just innovated their way to higher growth? This is because innovation is an inherently difficult process which requires talent, drive, political support, and most of all, the right incentives. Moreover, several natural impediments exist that impose limits on innovation. Primarily, these are lack of resources, informational asymmetries, resistance to change, and fear of failure.

The trick lies in creating an ecosystem that is conducive to innovation in potentially high value areas which would create a self-reinforcing innovation loop. Given the maturity of the venture capital (VC) industry, the model for this ecosystem has never been clearer (see chart). For small economies like the Caribbean, emulating the VC model would mean creating an ecosystem that uses local universities as initial filters of talent and feeders of investable ideas into the innovation value-chain. This then needs to be supported with VC investors at the seed stage who could provide incubation services locally in exchange for equity.

However, to germinate such a system in a small open economy requires the government to act like a VC itself by supporting innovation in high potential sectors. Indeed, a recent study by Cherif and Hasanov [1] finds that governments’ actions as early stage investors can resolve several coordination failures which precludes innovation loops from forming.

For example, while the current government initiatives in Trinidad and Tobago are commendable, they could be focused on one specific need of the future for which no country has yet specialized: big data. Big data is a popular term used to describe the exponential growth and availability of data for analysis. Much of these data are in unstructured formats but contain potentially extremely useful information if mined properly. Big data methodologies are designed to innovatively use existing computing technologies to extract this information. While large companies like SAS and Mathworks as well as several universities have established research centers, the space is just opening up and is full of opportunity.

Concretely, perhaps Trinidad and Tobago could use the recently –approved IDB ‘Global Services Loan’ to set up a Big Data Think Tank affiliated with UWI. Top-performing students could be recruited as part of their studies where they could specialize in big data analysis methods. If implemented properly, the result of such an effort might just be that Caribbean might be home to the next big tech giant!

[1] Reda Cherif and Fuad Hasanov (2014) ‘Soaring of the Gulf Falcons: Diversification in the GCC Oil Exporters in Seven Propositions’ paper presented at the High-level IMF conference on Economic Development, Diversification and the Role of the State, Kuwait City, International Monetary Fund.