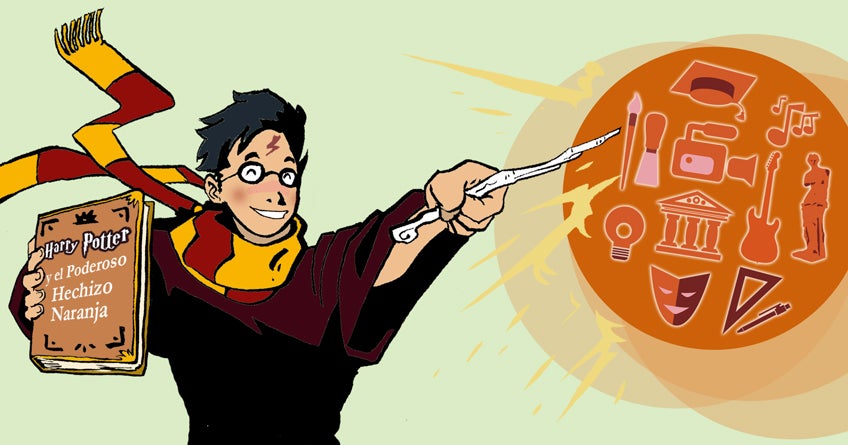 By Matteo Grazzi and Leonardo Ortega

After 20 years, 8 books, 7 movies, 1 theatre play, and more than 300 other officially licensed products, the net worth of the Harry Potter franchise is estimated in around 25 billion dollars (and counting). This amount, that is almost equivalent to the entire GDP of Trinidad and Tobago, is just one of many examples of the economic potential of the activities based on creativity, also known as “creative economy” or “orange economy”.

In 2014, the creative industry in UK generated 84 billion of pounds (around 130 billion dollars) in a context of low economic growth, which correspond to 5.2% of the GDP and 5.8% of the employment.

This phenomenon is not limited to developed countries. In every Latin America and Caribbean country there are many successful cases. For instance, the Caribbean is well known by two important creative contributions that are based on their cultural heritage. On one hand, the Caribbean music has spread all over the world. Music genres such as mento, ska, and reggae rose in the region. On the other hand, the Carnivals are world-class creative events that combine many creatives activities such as music, masquerade bands, costumes, performing arts, among others.

These activities, together with many others based on talent and creativity, explain why the creative industry in the Caribbean is one of the most important economic activity. In Trinidad and Tobago, according to WIPO, the copyright-based industries[1] contributed approximately the 5% of total GDP and employment of the country. In the case of smaller islands, these figures can be even higher. For example, in Saint Lucia, these industries represented the 8% of the GDP.

The cultural economy is divided into those activities related to traditions and heritage, and those that belong to what is known as cultural industries. In addition, the creative industry only considers industries where the value of the final output is mainly due to its creative content, while the activities of creative support form another category.

Innovation and the Creative Economy

Despite the benefits of the creative economy, this sector has still a limited role in the development strategies in emerging economies, such as those in Latin America and the Caribbean. Even more, it is still uncommon to associate this phenomenon with the innovation process.

Innovation is traditionally related to the science and technology activities. If we imagine an innovative firm, we probably think of scientists conducting experiments, engineers building prototypes in laboratories, or programmers in front of their computers. It is hardly associated with a photographer, a film director or a fashion designer. However, if we think carefully on what are the fundamental elements of the concept of innovation perhaps the distance between innovation and the creative economy is not as great as it seems at first glance.

Innovation is characterized by two key elements: novelty and value added. And creative activities are not only novel by nature, but they also generate value for those who enjoy their products. The only difference here is that this value added is not related to functional changes as in the case of traditional innovation, but it is due to aesthetic improvements or a new experience for the user. This concept is known in the literature as soft innovation.

For instance, in the automotive industry, between the new model of a car and the previous one, there are only few functional (sometimes very innovative, though) improvements. Most of the differences between them convey external and interior aesthetical changes, usually the result of design activities. These changes in car models determine their success or not in the market, and consequently their price. That is why large automobile companies invest significant sum of money in creative activities as part of their business model.

Moreover, the relationship between creative activities and innovation is not limited to the concept of soft innovation. In fact, creative activities increasingly require the use of state-of-the-art technologies, especially digital ones. It is clear, for example, that Harry Potter films would not be so attractive without the special effects that make them so realistic. These new technologies, initially developed for the creative industry, often find applications in other sectors, pushing the overall innovative performance of the economy.

Public Policies for a Creative Region

As in the case of innovation, the creative – or orange – economy shares many of the market failures that hamper its development and make some form of public support necessary. For example, it is not easy to appropriate the whole economic benefit of these activities because the creative products can be easily copied or reproduced. In addition, their intangible nature can generate asymmetric information and limit the access to financing.

When these market failures are present, the supply of creative goods and services is lower than what is socially desirable, justifying public support to the sector. This support can be provided through the provision of public goods, such as cultural infrastructure (theaters, museums, etc.), better regulations on intellectual property rights, or investment in creative human capital. Similarly, the public sector can implement public policies that create the appropriate incentives for the emergence and development of creative activities, for example through fiscal stimulus or schemes to increase consumption.

As Harry Potter taught us, the creative economy is a very effective spell to generate value, employment and innovation, stimulating a strong and sustainable economic development.

However, just as Potter needs his wand to make his spells work, the creative economy needs many ingredients to deploy all its magic: talent, technology, research, regulation, among others. Public support is a key element in getting these ingredients. The challenge of the region is to combine all of them to make the powerful orange spell come true.