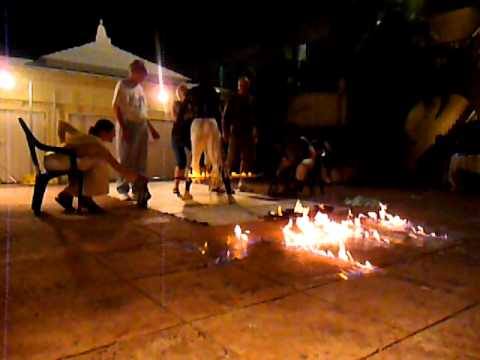 Meet Action Jackson. Action is the epitome of what one would call a Bahamian icon. Born April 30th, 1965 and given the official name, Whitfield Morley, Action Jackson is a limbo and fire dancer as well as a fisherman.

Action’s journey into becoming a limbo dancer is an interesting one. After he and his wife divorced, he “was stressed out” and found himself in a difficult place. He tried drinking and smoking – neither of them worked. He then started dancing and Action’s friend told him he would make a great limbo dancer. He performed a free show at the Fun Club (now the Harbourside Resort). This led to him doing a show at Breezes Bahamas and the rest, as they say, is history.

Speaking of history, the limbo dance “originated on the slave ships as a form of exercise…and the dance continues to be celebrated in Caribbean carnival and calypso as a symbol of survival” (Darroch, 2009). The dance is “a remembrance of Africa but also a product of the merging of multiple Cultures” (ibid). Thus, the limbo dance is part of the Caribbean heritage that should be preserved.

The Orange Economy, or creative economy, “encompasses the immense wealth of talent, intellectual property, interconnectedness, and, of course, cultural heritage of the Latin American and Caribbean region” (Restrepo & Marquez, 2014). Countries should practice the third rule of the Orange Economy which is to “acknowledge the work of artists and creatives… Acknowledge that their work represents a legitimate job, a real job that creates employment, wealth and economic opportunity” (ibid). Action Jackson is such an artist.

Action once had a guest who flew him to Texas, picked him up from the airport in a stretch limousine, built a stage especially for him and paid 85% above what Action charged him. Since then, persons have called him to do shows in England, Indiana, Las Vegas, Newfoundland, New Brunswick, Sudbury and Toronto. Limbo allows him to see the world “for free”. Action tries to do something creative and out of the box at each show. Sometimes he would light himself on fire, add up to 16 sticks (the equivalent of limboing under 2 cars!) or lift a guest and go under the limbo stick with her. Quite strong, he once lifted a guest who weighed 385 pounds! Action himself only weighs about 150 pounds. The deep sea diving helps to keep him fit, he says.

Action notes there is room for many more dancers in the industry as each entertainer brings his or her own style to the show. His greatest concern about the industry is the alcohol. In most places, drinks are free for entertainers – therefore it “destroys many entertainers”, he says. Action himself almost got caught up in this cycle but made a decision not to drink anymore. When he took his last drink in the bar one night, he told himself he would never drink again and would only wear white as a symbol of purity. He has been wearing white for the last 19 years now.

The onus is on us to continue to preserve the beautiful aspects of our culture. It is all the more beneficial when we can legitimize skills and talents such as limbo-dancing as they are significant contributors to our overall value as a country. It is only then that we would be able to witness a greater growth in employment opportunities and even our GDP.

Action’s advice to anyone who would like to get into limbo: If you like to limbo, learn the trade. Do not worry about the money. The money will come after. You have to want to do it. You have to love it. Live it.