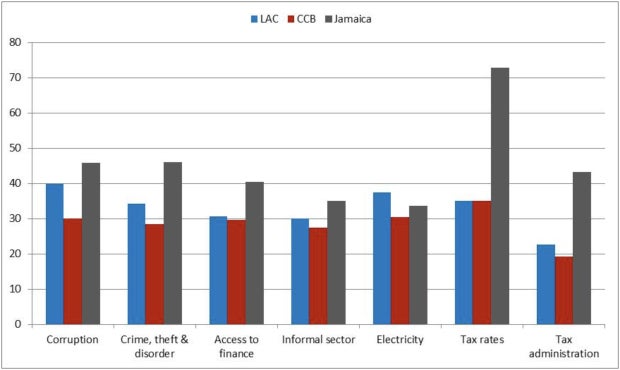 The CNN recently published a list of the 10 coolest nationalities, ranking Jamaicans in the third spot (behind Brazilians and Singaporeans but before Mongolians). Regrettably, Jamaica does not always rank so high, especially not when it concerns the economy or doing business.

It is well known that Jamaica does poorly in the World Bank’s Doing Business report, being ranked 94th out of 189 countries. Jamaica ranks best for starting a business (23rd) and resolving insolvency (31st) and worst for paying taxes (168th).

There is another business climate related survey, the Enterprise Survey, which was done in Jamaica by the Compete Caribbean in 2010. While the Doing Business Survey ranks according to measured cost, time or effort to do typical, business related tasks, the enterprise survey directly interviews managers of formal companies about several issues related to the operations of their businesses. The questions that receive most attention are whether specific factors are an obstacle to the firm’s operation (ranked from no obstacle, a minor obstacle, moderate obstacle, major obstacle, or a very severe obstacle), and which of these factors they considered to be the biggest obstacle. Using this survey, we recently explored what Jamaican enterprises had to say about the Jamaican business climate.

Jamaican firms overwhelmingly identified tax rates as the biggest obstacle (35.1 percent), followed by electricity (12.4 percent) and access to finance at (11.7 percent). However, the biggest surprise were the results for the questions which factors firms saw overall as an obstacle. We found that one third or more of Jamaican firms saw 7 out of 15 obstacles as a major or severe obstacle (Graph 1). This implies that managers are constantly struggling with several issues at the same time, which probably makes it very hard to focus on running a successful business. From Graph 2 we see that the share of companies that complain is high in comparison to other small economies in the Caribbean. We can expect that it would also imply that it’s hard to compete with international firms that do not have this many obstacles.

This is a challenging situation and has negative impacts on economic growth. Both surveys point to the fact that doing business in Jamaica is hard. It might be easy to start a business but running it faces several challenges. It is probably a small comfort to know that if it does not work out, resolving insolvency is easy. However, we can expect some relief as important reforms are underway in major areas including taxation and tax administration, registering businesses, access to finance, insolvency and many more. In addition, seeing the reform plans of the National Competitiveness Council or the Caribbean Growth Forum, we can expect further improvements in areas like developmental approvals approvals (to follow progress done under the Caribbean Growth Forum (follow @caribgrowth). As such, we can hope to soon catch up with other countries and rank in doing business like we rank in the ‘coolest nationalities’, just behind Singapore.