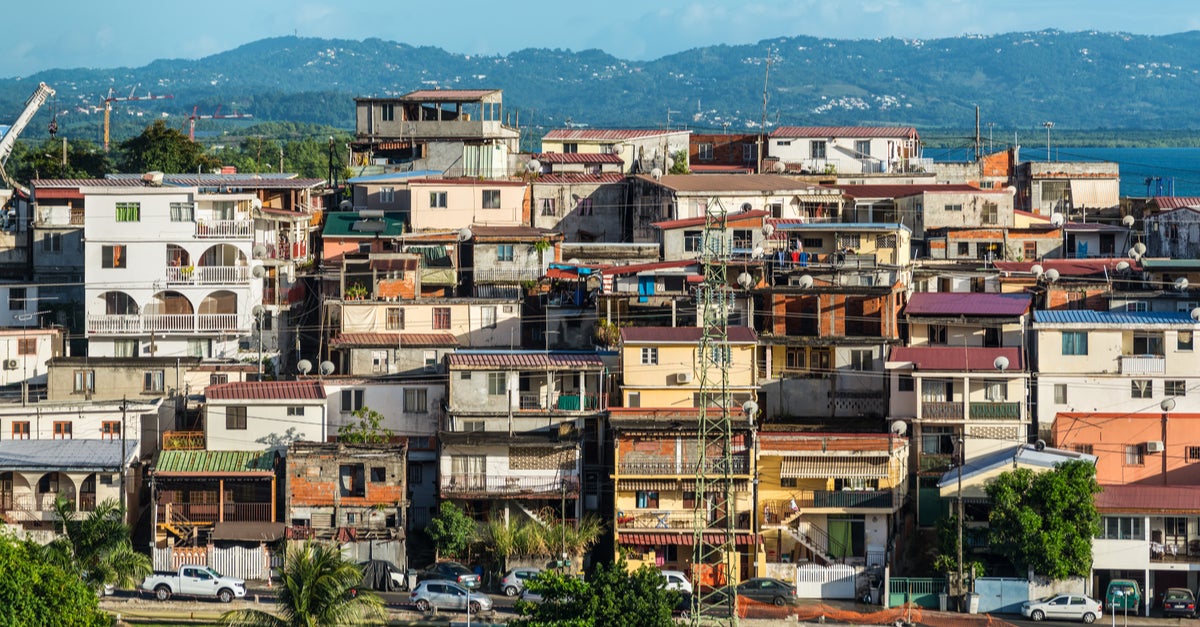 COVID-19 is taking an unprecedented (albeit still unknown) toll on Caribbean region’s economic growth. According to the recently published Caribbean Quarterly Bulletin, the decline in the tourism industry will particularly affect The Bahamas, Barbados and Jamaica. Plummeting international commodity prices are having severe consequences in Guyana, Suriname and Trinidad and Tobago.

The crisis is impacting both lives and livelihoods. To understand how, the Inter-American Development Bank carried out an online socioeconomic survey across all 6 countries of the Caribbean. Almost 12,500 households responded over a 2-week period from April 16 to April 30, 2020. Individual data is confidential, in accordance with the standards set by the Internal Review Board of Cornell University, which approved the survey.[1]

1. The number of vulnerable households has roughly doubled in the first six weeks of the pandemic. The percentage of Caribbean households with income levels below the minimum wage (the first two columns of Figure 1) increased from 23% in January 2020 to about 43% in April 2020. The figure shows consistent reductions across all income levels, in the fractions of households earning more than the minimum wage.

Figure 1. Household and Income Distribution in the Caribbean 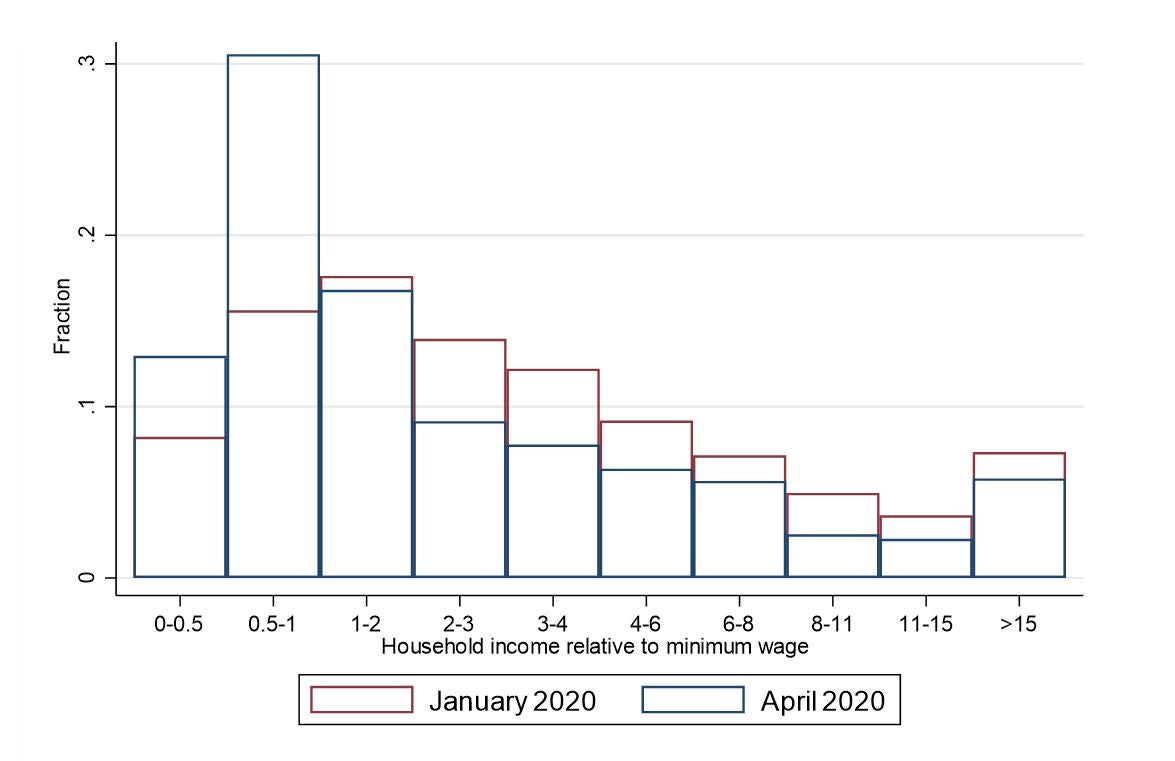 2. Vulnerable households are finding challenges to cover basic needs. Figure 2 shows that 36.9% of households earning below the minimum wage reported experiencing hunger, while 48.7% of them reported deleterious changes in their diet with respect to the pre-pandemic period.[2] These adverse effects become less serious as household income increases.

Figure 2. Hunger and Changes in Diet in The Caribbean 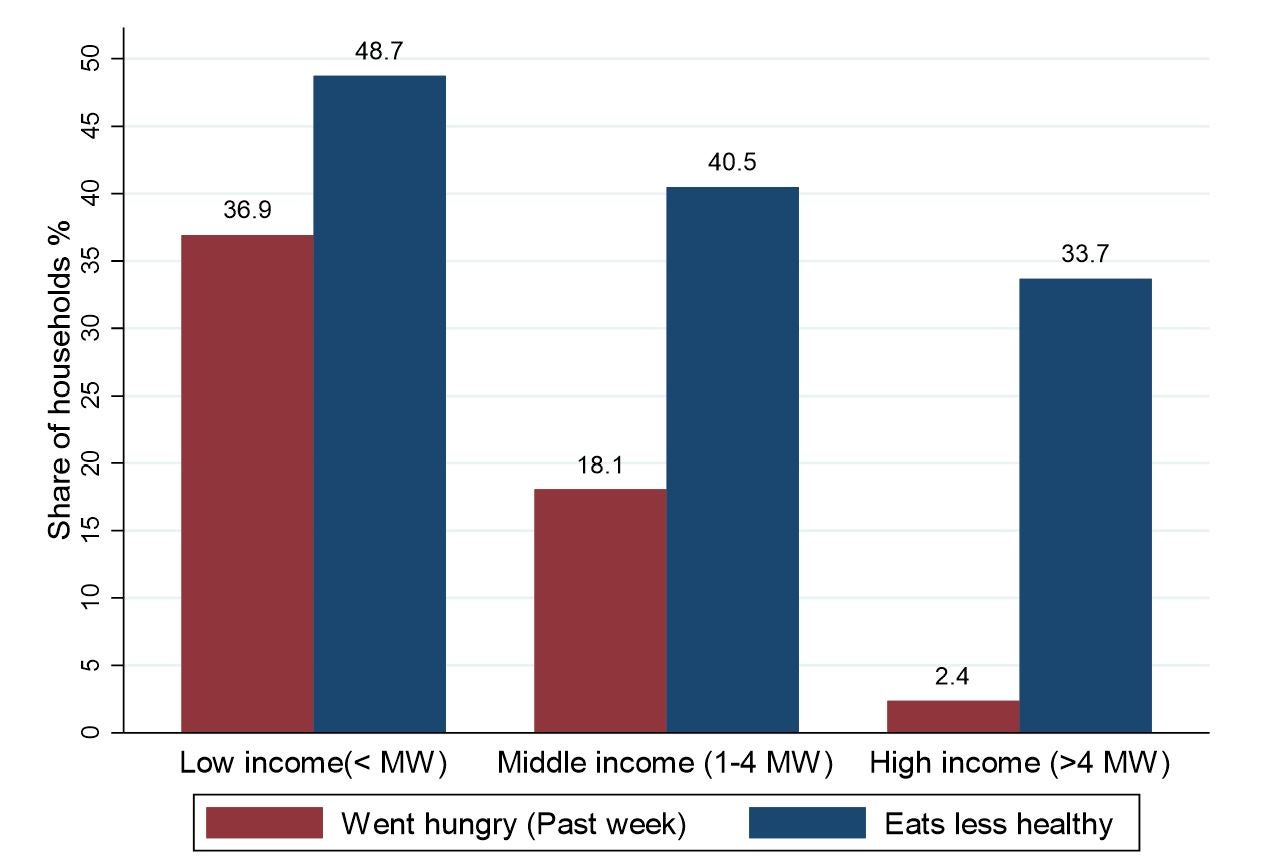 3. Labor market impacts are highly unequal. Lower average incomes and uncovered basic needs reflect an unprecedented rate of job losses in the region. Figures 3 and 4 show that households which were relatively more disadvantaged before the crisis have been more affected in the labor market; a reality that will likely exacerbate pre-existing inequalities. Both commodity and tourism dependent countries show a larger prevalence of job losses in households that earned below the minimum wage in January 2020. A similar pattern, although less pronounced, is observed for the incidence of business closures. Tourism dependent countries approximately double the rate of job losses for both the highest and lowest brackets of the income distribution, when compared to commodity dependent counterparts: 77.3% vs 44.2% among lower income households and 36.1% vs 14.2% among higher income households. 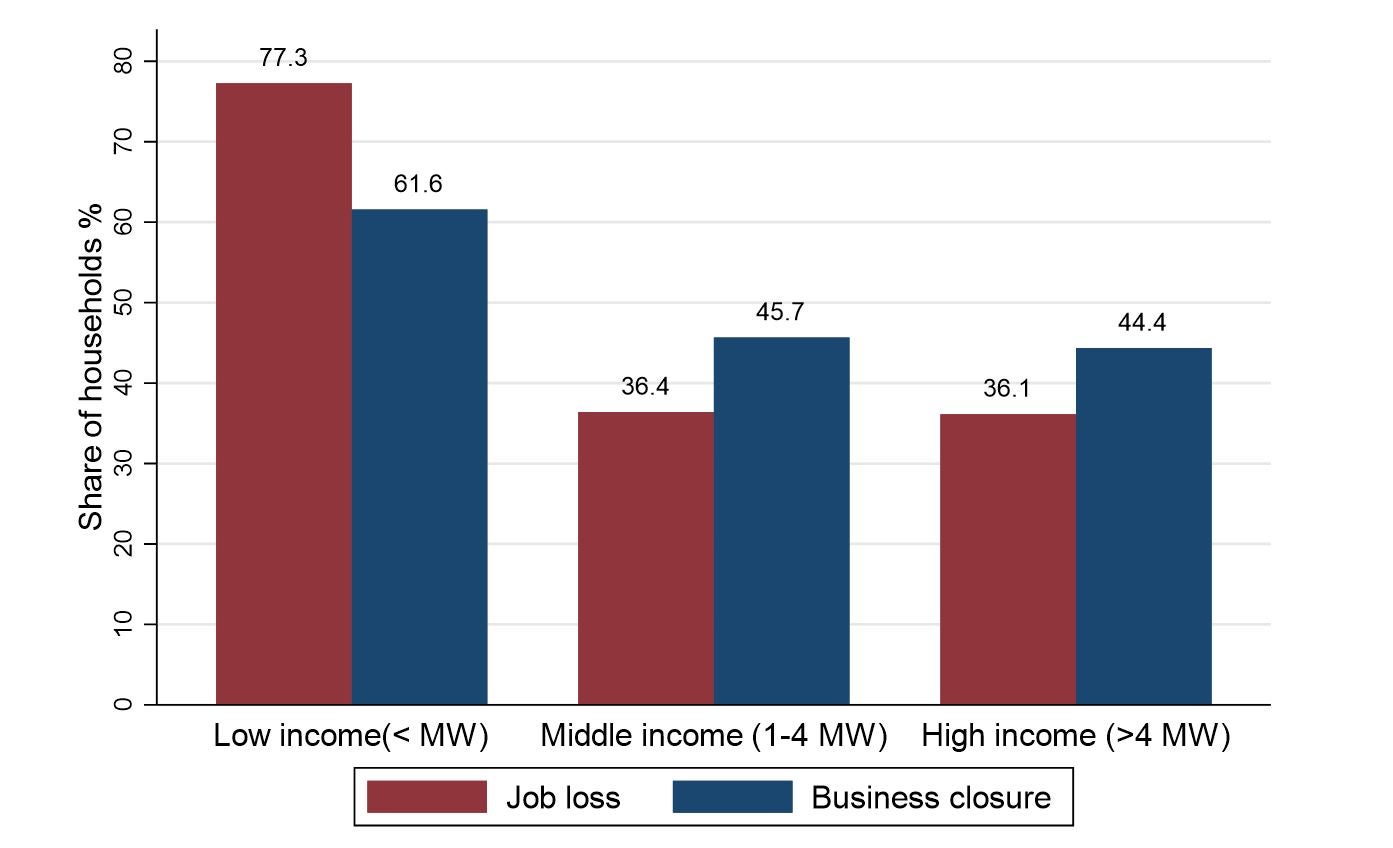 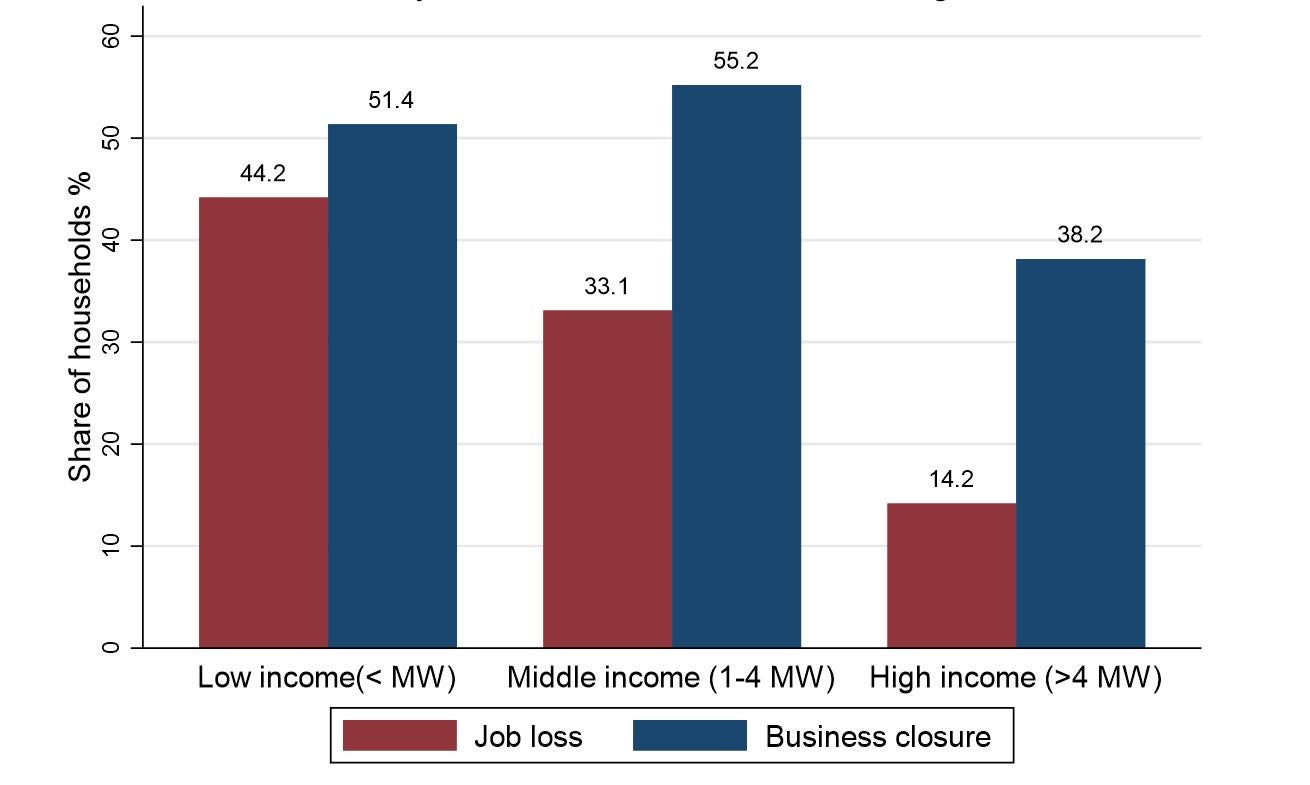 4. Social assistance programs are playing a major role in supporting livelihoods; but targeting could be improved. Most countries in the region offer universal access to health and education services, free at the point of delivery, as well as a wide range of social assistance programs. These programs have constituted important mechanisms to reach and support persons who are being affected by the crisis. Figure 5 shows social programs’ coverage rates before and during the pandemic. Social assistance programs have increased their coverage by 6.3 percentage points among low income households and by about 2 percentage points for households who earned above the minimum wage. This tells us that although social safety nets coverage has increased relatively more among disadvantaged households, they are also a source of inefficiencies in the public spending system. Indeed, leakage is significant. Pre-pandemic coverage rates were equivalent between households earning below 1 minimum wage and those earning more than 4 minimum wages (23.5% vs 24.2%).[3]

Figure 5. Coverage of Social Programs in The Caribbean 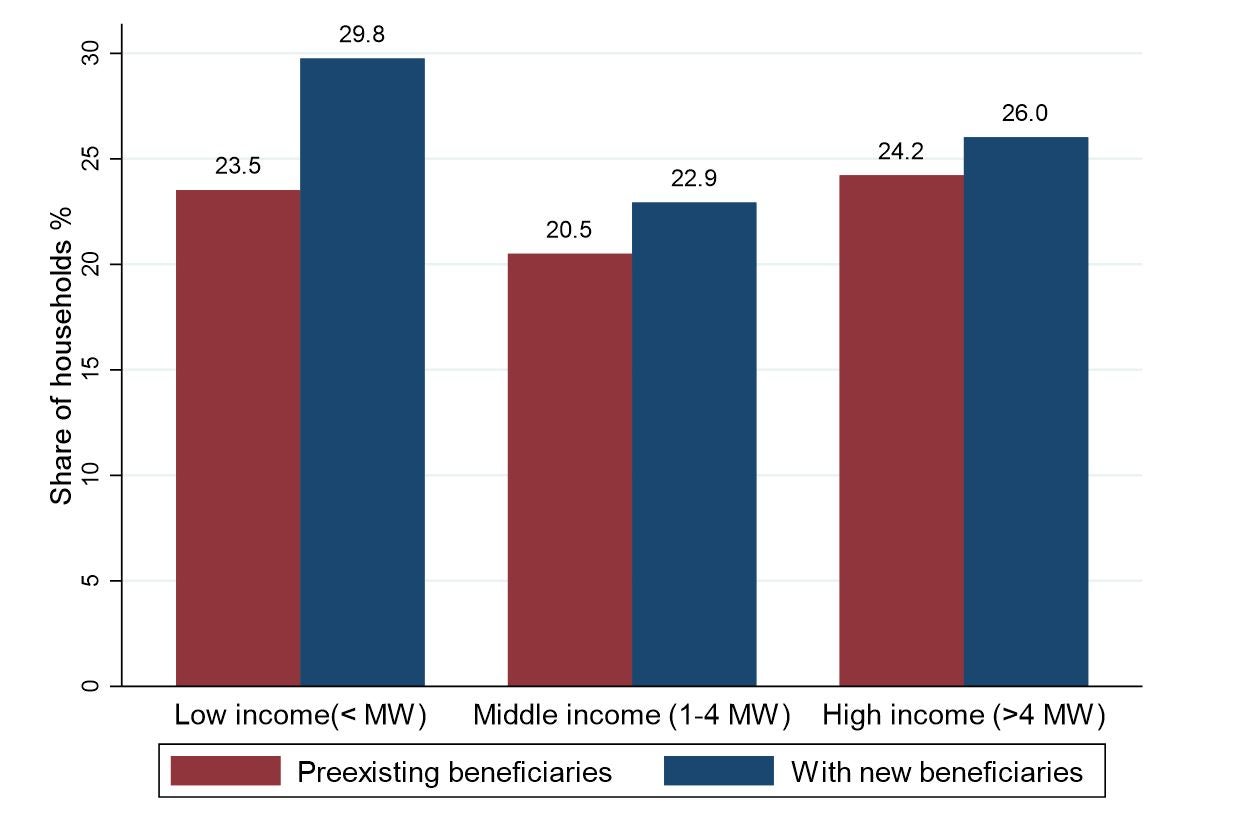 How are governments responding?

The region faces an unprecedented challenge and governments are responding through aggressive social distancing measures and by rolling out support packages for individuals and firms. The table below presents a summary of the main measures carried out to date in all the 6 Caribbean Department countries of the IDB. Most countries are containing the spread of the virus and are either reopening their economies or have announced a strategy to do so in the next few weeks. 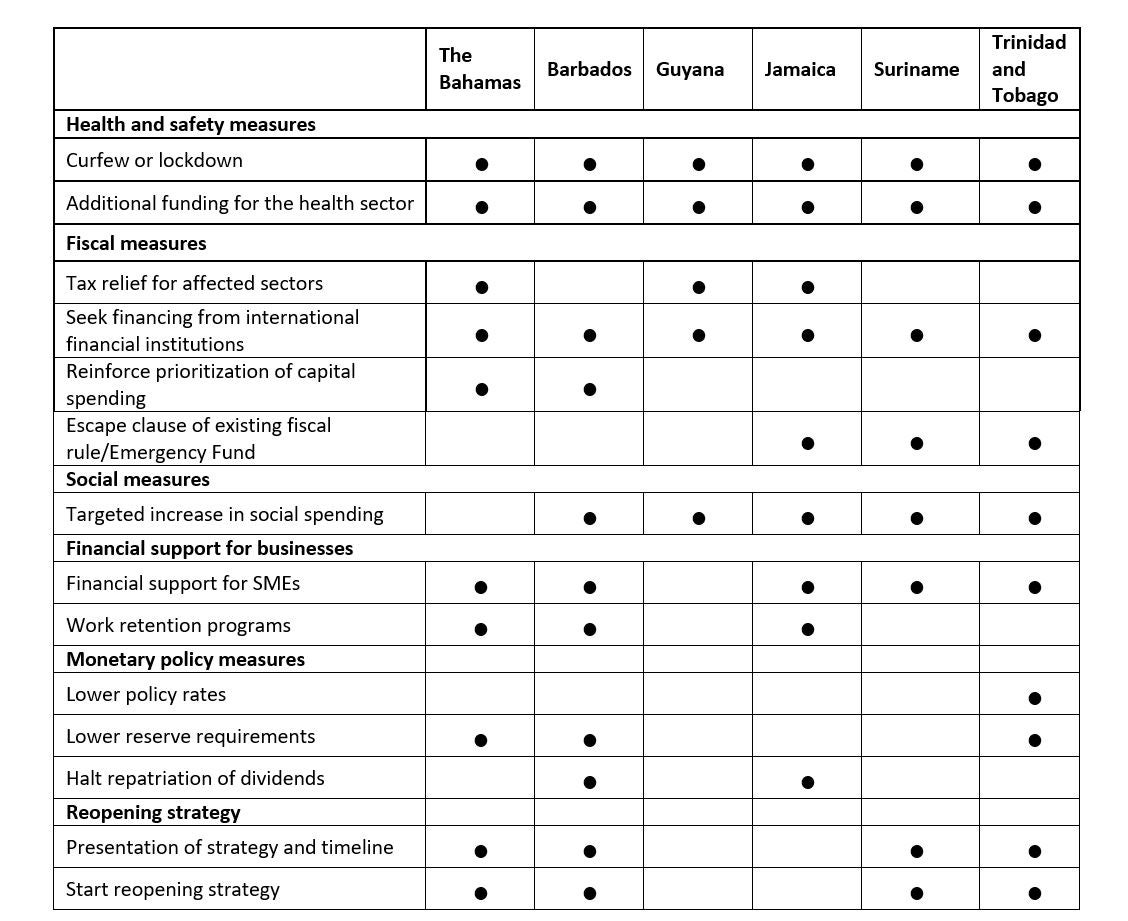 More and better targeted measures will be required from governments. The crisis will very likely continue throughout 2020 and beyond. In the face of increasing fiscal constraints to meet rising social demands, better targeting mechanisms will be necessary. As such, high quality and timely granular household level data will be highly needed. Despite significant recent advances in data collection across Caribbean countries, the COVID-19 crisis has evidenced the remaining gaps in this area. As recently stated by Jamaican Prime Minister Hon. Andrew Holness: “This is the real test of the society now. Are we in a time of crisis able to identify everyone? And the answer is no”. Fortunately, technological advances in terms of alternative methods of online and mobile based data collection could help in this endeavor.

[2] All results in this blog are displayed by income level group, relative to the minimum wage (MW), during January 2020. That is households are classified according to their pre-pandemic vulnerability in terms of income.

Diether W. Beuermann is a Lead Economist in the Caribbean Country Department of the Inter-American Development Bank. He has led research and data collection projects in various countries, including Barbados, Colombia, Guyana, Jamaica, Peru, Russia, Suriname, The Bahamas, Democratic Republic of Congo, Trinidad and Tobago, and the United States. His research has covered the effects of different information and communication technologies on agricultural profitability, child labor, academic performance, pre-natal care, and neo-natal health. He has also conducted research on the effectiveness of participatory budgeting, the short- and long-run effects of educational quality, the multidimensional nature of school causal effects, the determinants of school choice, the effectiveness of math-focused parenting programs, the role of remittances as a social insurance mechanism, the effects of early-life weather shocks on short- and long-term human capital accumulation, the effects of public health insurance on health outcomes and labor supply, the effects of behavioral-based entrepreneurship training on firm profitability, the effects of blue-collar crime on financial access and credit prices of affected firms, and whether and how conditional cash transfers may affect the effectiveness of other human capital development policies. He has published in several leading international peer-reviewed journals, including the Review of Economic Studies, American Economic Journal: Applied Economics, Journal of Human Resources, Journal of Health Economics, Journal of Development Economics, and World Development. He holds a B.A. in Business Management and a B.Sc. in Economics from the Universidad de Lima, a M.Sc. in Finance from the University of Durham, and a M.A. and Ph.D. in Economics from the University of Maryland-College Park.