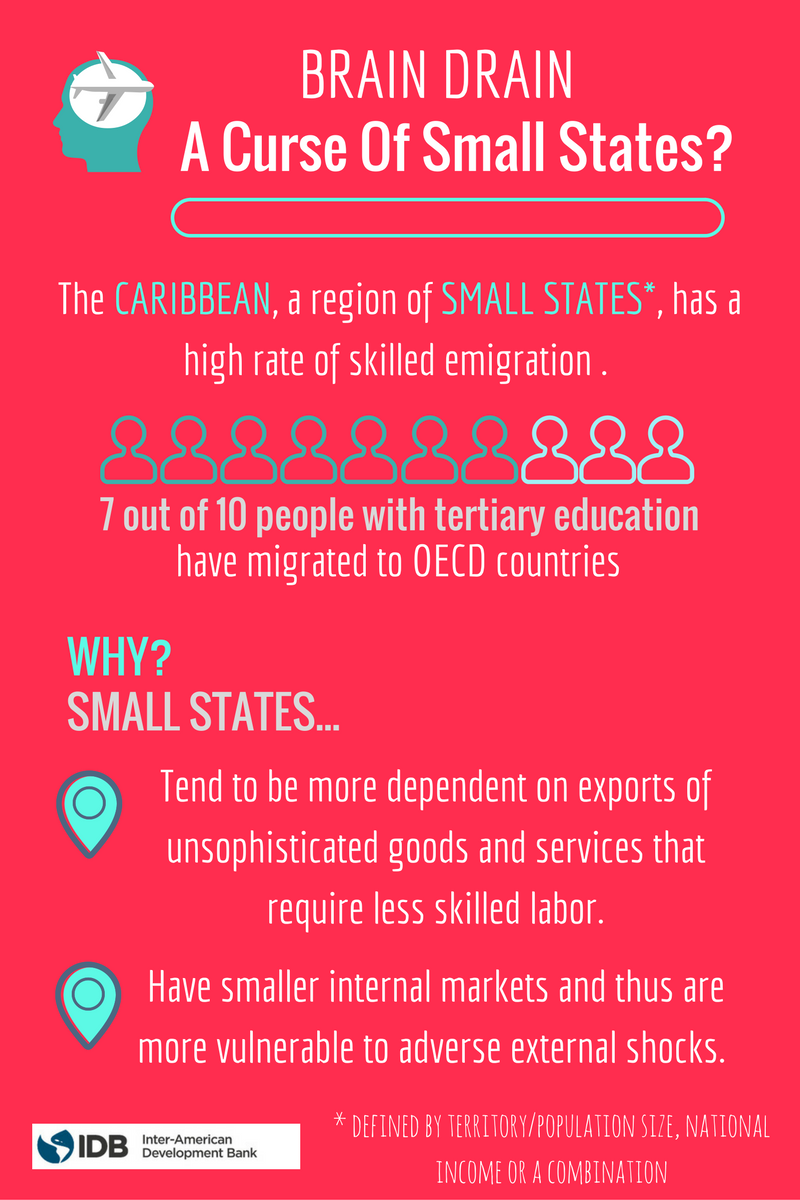 The rate of skilled emigration from small states and territories, defined either by territory size, population size, national income or some combination thereof, tends to be persistently high over time. Docuquir and Schiff (2008) found that small states had a brain drain rate five times that of all developing countries, twelve times that of high-income countries, and eight times the world average. In the Caribbean, a region dominated by small states, the percent of tertiary educated that emigrate ranks among the highest in the world.

High-levels of emigration imply both benefits and costs for the source country. On the positive side, overseas workers remit large amounts of transfers that smooth consumption and alleviate poverty for relatives in the homeland, and help maintain macroeconomic stability by increasing the inflow of hard currency. In the Caribbean, Jamaica, Haiti, and Guyana have remittance flows that account for more than 10 percent of their GDP each year. However, as was previously discussed in another blog post by Inder Jit Ruprah, the direct impact of the high stock emigrants outweighs the positive feedbacks.

Table 1. Percent of Caribbean Labor Force That Has Migrated to OECD Member Countries, 1965–2000, By Level of Schooling

Why does brain drain happen in small economies?

First, small economies tend to be more dependent on trade and less diversified than larger economies. This makes them require less skilled labor. The small territorial size, the small population, and the limited natural endowment of “small countries” forces them to specialize in the production and export of a few goods and services and to rely on imports for a large array of intermediate and finished  goods they cannot cost effectively produce. In this setting, the demand for a variety of skilled labor is reduced. Moreover, the undiversified economic base, dependent on a few raw commodities like sugar, copra, fisheries, cotton, coffee, tea, rice, timber, minerals or services like tourism, in absolute terms reduces the demand for skilled labor. In these economies, agricultural workers and waiters face much higher labor demand than teachers, university professors, CPAs, scientists, medical professionals, and engineers.

Second, small economies, due to the high degree of trade openness and specialization in commodities and services with low demand elasticity, tend to be more vulnerable to external price fluctuations, adverse weather shocks, and natural disasters. Therefore, they tend to experience more growth volatility and economic instability compared to countries with larger internal markets, a more diversified manufacturing base, and less trade openness. Whereas trade and external imbalances can be corrected by changes in the exchange rate in a relatively short time period, adjustment mechanisms do not readily exist to deal with imbalances and mismatches in the labor market. The decision to invest in human capital formation takes years to play out and retooling of labor  forces to match a particular local market demands is not instant or costless. When bad times hit, skilled labor in small economies often opt to emigrate. When larger economies experience downturns, mismatches in labor can be answered by internal migration and by temporary welfare assistance programs. In the US, for example, many unemployed workers from other parts of the country flocked to North Dakota between 2006-2012 to seek employment opportunities, a state that was booming due to the revolution in “fracking” technology that made the Bakken shale oil and gas formation commercially exploitable. In small developing countries, unemployment insurance and other safety net programs are not as robust nor is the possibility of moving to a more dynamic part of the country readily available.

Third, if small economies cannot compensate for the emigration of skilled labor by attracting an equivalent inflow of skilled immigration or by stronger human capital accumulation, then the capacity to grow and develop can be impaired.  The quality of institutions, the effectiveness of government, the ability of the private sector to innovate and compete, and the nature of political culture can all be diminished contributing to mismanagement, corruption, low growth, and instability. Since attracting skilled foreign labor is an unlikely outcome for most low-income developing countries, the source countries find themselves on a treadmill.  They must produce even more tertiary graduates each year just in the hope of retaining a small fraction at great public expense.

What are the possible solutions for brain drain?

In short, small island states have structural weakness that must be addressed through short- medium- and long-term measures. The highest priority is to slow the flow through contingent financing for education abroad and create better opportunities at home. Small states such as the Caribbean countries must aggressively improve governance, business climates, and strategically build a diversified economy based on knowledge intensity. Long-term, more economic integration and ultimately economic union is the answer. In a hyper globalized economy, smallness does seem to be an inherent weakness except for a handful states due to strategic location that can convert themselves into trading entrepots.