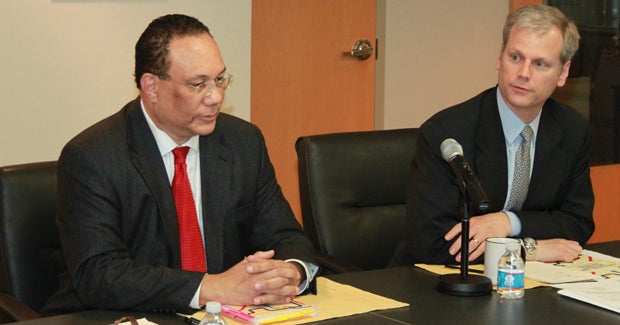 
On February 6th, former Caribbean Executive Director for the Inter-American Development Bank, Ambassador Richard Bernal was hosted at the Council of the Americas to discuss Caribbean Trade negotiations with the European Union. During the event, Ambassador Bernal presented his recently released book about his experience leading the Forum of Caribbean States (CARIFORUM) in their historic multilateral trade agreement with the European Union (EU) in 2008.

Though trade and development agreements between the two regions have existed for over 30 years, this trade agreement has changed the dynamics of the relationship, promoting a more sustainable process of economic development by expanding coverage to include services. The CARIFORUM-EU Economics Partnership Agreement (EPA) is a WTO compatible unique trade agreement between a group of developed countries and a group of developing countries.

Caribbean economies have always been highly dependent on exports and import tariffs as a source of revenue, making them extremely vulnerable to the slightest price changes in the commodity markets. Ambassador Bernal and his team of negotiators understood these constraints on long-term economic growth, prompting them to support trade liberalization with developmental aid in order to assist CARIFORUM economies in the implementation of the agreement.

photo by Jorge Merino, courtesy of the Council for the Americas
pictured: Ambassador Bernal

During the February 6th event Dr. Bernal recounted various aspects of his experience in the negotiation process to illustrate how small states can cope with complex trade. He began by explaining the asymmetry in power between larger trading blocs like the European Union and smaller blocs like CARIFORUM. In these types of arrangements, it is common for the trading partner with more leverage to underestimate the capacity of smaller countries to negotiate.  CARIFORUM was able to put together a highly skilled, world class team of negotiators who were able to compensate for the disparity in size and level of development. As challenging as negotiating with the EU was, building consensus among 15 small island developing states whose interests varied, was the most difficult aspect.

Ambassador Bernal shared several lessons from his experience as lead negotiator. First, he emphasized the importance of being proactive by initiating your own demands, and not responding to the demands of the larger party. Second, Ambassador Bernal concluded that it was critically important to engage stakeholders throughout the process in order to ensure that their goals and concerns are adequately represented in the positions advanced in the negotiations. Thirdly, he remarked that this trade agreement is only the first step to promote economic development, because the opportunities created by the EPA can only come to “fruition” by and implementing the agreement and ensuring national and regional policies create internationally competitive production of goods and services.

Christine V. Gomes is a Program Associate at the Americas Society/Council of the Americas, @cvidgomes