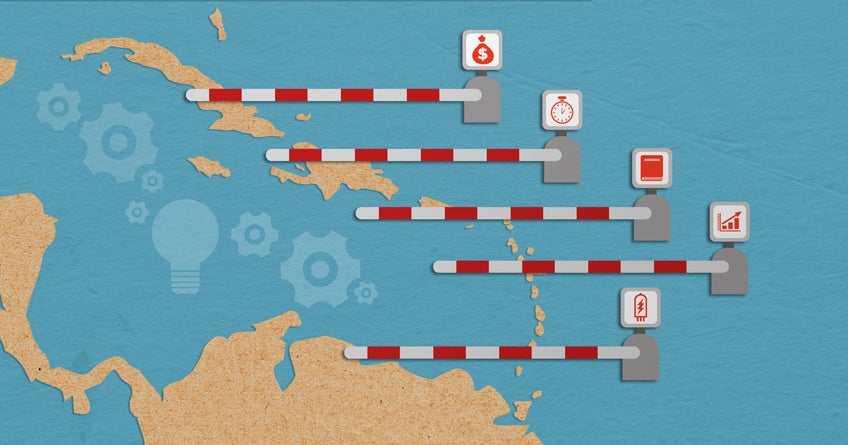 Caribbean economies have hardly grown in the last 30 years. The last significant growth was in the 1980s when tourism and banana production expanded, but has since declined due to the loss of competitiveness in the bananas market and the emergence of other tourism destinations. To make matters worse, the Caribbean countries are severely indebted and have very limited options to promote growth from public investment.

Both economists and policy makers, faced with this situation, agree that the economic growth of this region will depend on the ability of the private sector to increase its productivity and compete in new markets.

So, how can Caribbean firms become more productive and competitive?

We know that around the world, companies that introduce new products, processes, and services add much more value to their customers. Given that innovation has such an important impact on businesses ability to compete, grow and generate employment, the Compete Caribbean program – funded by the IDB and the governments of the United Kingdom and Canada – organized a global research competition in 2015 and 2016 to identify the factors impacting innovation at the firm level in the Caribbean. The contestants used two firm-level surveys conducted in thirteen Caribbean countries during 2010 and 2014, covering a representative share of almost two thousand companies in each. The winning papers were recently published in a book that looks closely at the variables impacting innovation in the Caribbean. This book complements a recent study published by the Inter-American Development Bank that looks at the performance of the Caribbean private sector against that of other small states in the world, and makes policy recommendations.

In terms of the question of how innovative is the Caribbean, and what factors affect innovation at the business level, the recent book found that while only 26% of Caribbean companies had innovated in the previous three years, 59% of them intended to innovate in the next three years. This group of potentially innovative companies, however, face certain barriers that make it more difficult for them to start innovating.

What are some of these barriers?

Time to export has a negative impact on how much businesses spend on innovation. On average, it takes more than twice the time to export from the Caribbean than from small countries in Central America that compete in the same industries, and the cost of complying with documentation is much more expensive.

A few policy conditions affect businesses’ incentives and ability to incorporate new knowledge. Weak protection of intellectual property provides few incentives for innovation. A context of low skills in the workforce makes it more difficult for potentially innovative firms to discover, incorporate and absorb new knowledge. Indeed, Caribbean companies employing higher proportions of skilled workers are more likely to innovate. The private sector reports weak links with universities as well as difficulties in collaborating with laboratories, research centers and even other companies in the same sector. This negatively impacts innovation by reducing opportunities to co-create and disseminate knowledge.

In addition to the difficulty in accessing financing and the cost of exporting, the research explored the impact of competition from formal and informal enterprises on innovative behavior. More than half of the companies surveyed (55 to 60%) face competition from the informal sector. While competition, both formal and informal, increases the likelihood that firms will innovate, it does so in the form of an inverted U. That is, innovative behavior increases when there is little competition in the market, but decreases when competition becomes very strong. The research found that there is not enough formal competition in the Caribbean to stimulate the optimal point of innovation, but on the other hand there is too much informal competition thus discouraging innovation. Reducing informality and increasing competition from formal enterprises should increase the rate of innovation.

The research also explored the impact of power outages on businesses and found that those companies facing outages reduce the number of permanent employees. Almost all jobs lost were jobs held by women. The loss of jobs in the average firm is equivalent to about US $ 40,000 lost in terms of wages.

One aspect also addressed in the research is the impact of public promotion programs on productivity and innovation. It was found that those companies that participate in these programs increase their sales and their ability to innovate, and spend more on innovation.

While these are not the only obstacles, these research findings provide a preliminary agenda for increasing productivity and innovation in the Caribbean and provide a guide to design support programs.

In its first phase, the Compete Caribbean program showed that in the region there are innovative companies that, with a little assistance, can be competitive in international markets. In its second phase, which begins in 2017, this program will continue to support the Caribbean private sector by providing technical assistance to innovative companies, as well as to governments to improve public programs and the business climate. The goal is to plant the seeds for a more productive and innovative Caribbean private sector by overcoming some of the barriers described above.

A Spanish version of this article was published in our innovation blog.

To learn more about constraints affecting the private sector, check out our Quarterly Bulletin Volume 6, Issue 1 : Private Sector Development in the Caribbean