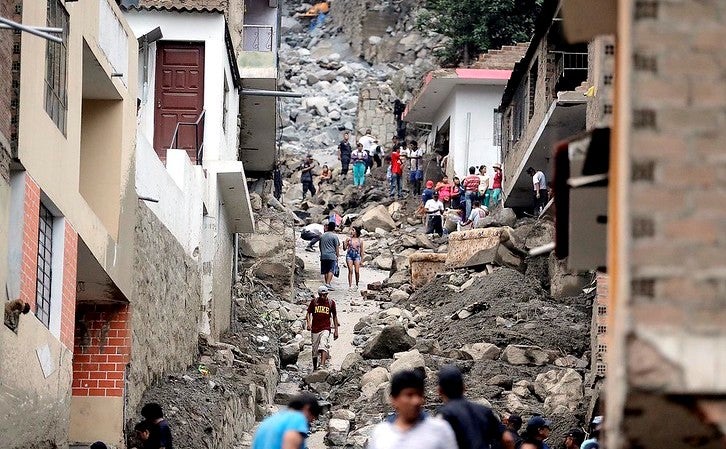 A new methodology, created by the Inter-American Development Bank (IDB), aims to assess disaster and climate change risks in the preparation, implementation, and operational phases of projects, to increase their resilience.

The IDB’s ‘Disaster and Climate Change Risk Assessment Methodology’ report, takes a multifaceted and integrated approach to seize adaptational and resilience opportunities throughout a project’s lifetime.

It has been created to contribute to the development of sustainable infrastructure in response to growing concerns around disaster and climate change in Latin America and the Caribbean.

The region is particularly vulnerable to the impacts of an increasingly unpredictable and changing climate, which poses significant threats to both human life and economic development. Natural disasters, exacerbated by climate change – including floods, landslides, hurricanes, and wildfires – regularly impact the region, with catastrophic results. Damages linked to global heating may cost Latin America and the Caribbean countries in excess of $100 billion dollars a year by 2050, the IDB estimates. 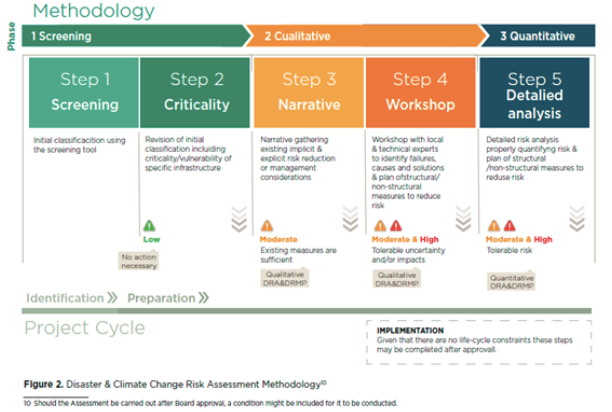 The report considers how a disregard for disaster and climate change risk may hinder the purpose of a project, and potentially shorten its lifespan. The methodology ultimately aims to increase the overall fulfillment of a project’s long-term objectives while decreasing the risk to surrounding communities and the environment.

The methodology implements a three-phase system in the project’s life-cycle.

The first phase involves screening the project using the IDB Screening Toolkit, which considers the planned geographic location and the geophysical and hydrometeorological hazards. The screening also considers the criticality and vulnerability levels of the project by looking at its typology and the potential consequences of an operational failure. Criticality refers to the degree of significance that a structure or system holds within a larger context due to the type and scale of services or functionality it provides. Vulnerability refers to the inherent qualities that determine a structure’s (or a system’s) susceptibility to suffer damage.

Phase 2 aims to qualitatively assess the disaster and climate risk for projects classified as moderate or high-risk in the previous phase of the process. This involves data gathering from studies, documents and design considerations which already exist. The project might then be scrutinised through workshop-based assessments by technical professionals and climate risk experts and by sourcing local knowledge to give a rounded qualitative view of the risk levels.

The final phase involves a quantitative risk assessment to calculate, mathematically, the estimated scale of the impact (losses) on the project, communities and the environment in various hypothetical hazard scenarios. This step is only necessary for projects classified as High Risk.

These three phases enable project teams to gradually and sequentially assess the risks of their given projects in the early stages, allowing them the time to put in place implementing strategies to target and fundamentally improve overall disaster and climate resilience.

Projects don’t necessarily asses this kind of risk, but the IDB aims to catch potential disaster and climate change risks within the projects’ implementation and operational stages in time for them to be managed.

“As humans, we are in general not so good at assessing risk and the probability behind certain events occurring” says IDB specialist Maricarmen Esquivel. “This applies to natural hazards and climate change as well. In many instances we act after the flood, or the landslide, rather than before. This must be reversed. We need to move from a reactive to a more proactive approach, and for this, the first step is to understand the risk, so it can be managed’.

According to non-profit organisation Resources for the Future, the majority of US federal funding for flood risk reduction is appropriated after disasters strike. This is also the case in countries in Latin American and the Caribbean. This leads to important inefficiencies. At the same time, countries are more and more interested in assessing the disaster and climate change risk of projects as part of their public investment systems.

This makes the IDB’s methodology incredibly timely. The IDB regards the approach as a work in progress and the publication is ‘a living document that will continue to be updated as new data and methods emerge’, as stated in the methodology’s executive summary. The bank also acknowledges that the methodology needs to be tried and tested until it becomes second nature for project teams to incorporate disaster and climate change risk assessments in their early development protocols.

Ultimately, the IDB hopes to energise development projects across the world to apply systems that consider the risks that disaster and climate change may bring to their projects, from the conception and design level. It has been said that resilience and disaster risk prevention yield benefits of about four to seven times the cost, in terms of avoided and reduced losses. Financing ex-ante resilience pays off.

The methodology can be found here.

This article was originally published at Climate Home.

Melissa Barandiaran, of Peruvian nationality, is a Senior Environmental Specialist for the Environmental and Social Risk Unit (RMG/ESR) of the Inter-American Development Bank. Melissa currently leads the disaster and climate change risk topic at ESR, where she monitors and supervises portfolio risks related to disasters and climate change. Melissa worked in operations for the Environmental and Social Safeguards Unit for 9 years from where she led the disaster and climate change risk topic. She is co-author of the Disaster and Climate Change Risk Assessment Methodology for IDB Projects, and is part of the Resilience Community of Practice–an interdisciplinary IDB group that works on disasters and climate change risk. Melissa has worked on complex projects based in Haiti, Mexico, Guyana, Costa Rica, Argentina, Chile, Uruguay and other Latin American countries for the Transport, Energy, Water and Sanitation and Urban and Housing sectors. Melissa has a Master’s in Public Administration (MPA) with a concentration in Environment and Energy from Columbia University, NY, and has worked for the IDB for more than 11 years. Before working at the IDB, Melissa worked for Peru’s Ministry of Production on public policies related to petrochemicals, renewable energy and biofuels.