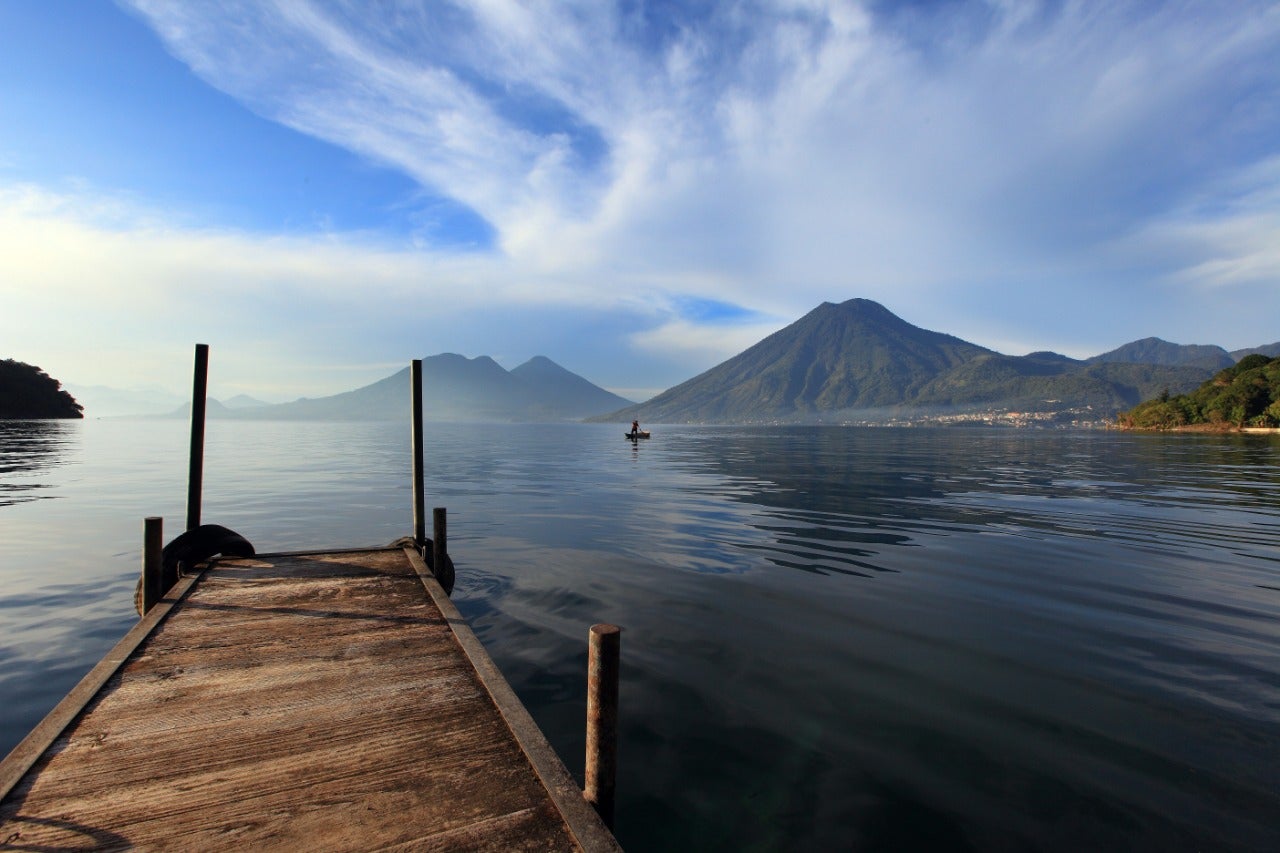 Nestled among towering volcanoes, Guatemala’s Lake Atitlan is often described as one of the world’s most beautiful lakes. Four of the Central American region’s seven biomes meet in the Atitlan region, making it a biodiversity hotspot and a natural “gas station” for migrating birds. But here, as elsewhere in the developing world, a lack of economic opportunities often drives local residents toward activities that devalue local ecosystems for biodiversity and for the people who rely on them for resources.

To help protect these vital ecosystems, in 2014 the Inter-American Development Bank, via the Multilateral Investment Fund (MIF) teamed up with Audubon to launch the Bird-Based Tourism Initiative, a program that promotes conservation in Latin America and the Caribbean by creating economic opportunities and incentives to protect wildlife and ecosystems.

Audubon and its partners are trying to turn bird-based tourism into a sustainable method of creating both economic opportunity and conservation action. Working with local experts and tourism authorities, Audubon developed a bird-guide training curriculum tailored to local cultures and languages, as well as basic business and hospitality training. The program also provided equipment for bird guiding and trail development, with the objective of creating a network of community-based birding destinations that offer skilled local birding guides, high-quality interpretation and lodging, food services, and related goods and services tailored to the birding market.

The Atitlan region is one of five sites chosen for the pilot phase of the initiative, which includes Belize, Paraguay, the Bahamas, and two regions of Guatemala. The goal of the initiative is to create economic alternatives that can raise incomes in communities living close to biodiversity-rich areas, while helping to conserve natural capital.

Project managers chose sites by layering poverty maps over maps of areas with high biodiversity that are likely to attract bird-watchers, which are among the fastest-growing segments of ecotourists. The target areas include some of the most threatened ecosystems in the region, many of which host migrating species that breed in the US and Canada.

The birth of a birding market

To determine how much demand there was for specialized birding guides from North American birders, Audubon reached out to its members, urging adventurous birdwatchers to consider visiting destinations where a birding vacation could support local communities in and around protected areas.

It’s fitting that the pilot phase of the project is wrapping up in 2017, which the United Nations has declared the International Year of Sustainable Tourism for Development. Thus far, more than 275 men and women have attended basic guide training, and more than 75 completed advanced training. The guides themselves weren’t the only beneficiaries. More than 400 local business owners participated in trainings, and 5,500 children received environmental and bird education classes.

Among the guides who say the program has transformed their lives is Everilda Buchan. Raised on the Guatemala farm where her parents worked, she was forced to drop out of school after second grade to help support the family. Buchan says the course’s multi-day field trip to different regions of Guatemala was the highlight of her life.

“It was like a university for me,” says Buchan,” who offers her services to bird-focused tourists for up to $100 per day—a far cry from the $5 per day that Guatemalan agricultural workers typically earn. Buchan has decided to pursue guiding and nature education as her life’s work. “I was born in nature, and that’s where I want to bring people, especially children. Those who know nature are the ones who will care for it.”

With the help of the project, Belize’s Cockscomb Basin Wildlife Sanctuary has experienced a 95 percent reduction in poaching and encroachment since the bird-based tourism project began.  In Paraguay, which has the highest rate of deforestation in South America, the guiding courses have sparked an interest in environmental issues, and boosted outside interest in a country that is not generally thought of as a tourist destination. Paraguayan girding guide Oscar Rodriguez now finds himself fielding calls from international bird-tour operators like BirdQuest and Sunbird Tours. The seven tours Rodriguez has scheduled for 2017 are more than he’s had in the previous three years combined.

“The guide training came at the perfect time,” says Rodriguez. “Now we can confidently say that Paraguay has the people who can take your people birding.”

In the country’s east, most of what was once a vast forest has been converted to industrial-scale farms. Among the remnants of the interior Atlantic forest is San Rafael National Park, which was declared Paraguay’s first Important Bird and Biodiversity Area (IBA). With its comfortable guest houses, Audubon-trained guides, and the opportunity to see more than 400 species, San Rafael is the one of the best places in the country to research or enjoy birds.

“We can already see the difference,” says farmer Eguer Arnalod Beis, who planted his first yerba mate last year. “We’re seeing more birds, especially the toucans and tinamous. Most people don’t know that you can make money off a crop and conserve the birds and trees also.”

In the Bahamas, bird-based tourism is spurring economic development on Andros and Inagua islands, two less-developed islands that have long been plagued by high unemployment and poverty.

“I’ll admit I was skeptical about whether this project could make a real difference,” says Scott Johnson, a science officer with the Bahamas National Trust, which partnered with Audubon in the Bahamas. “But I think the sustained effort is starting to pay off. Bird-lovers are beginning to show up more often, booking hotel rooms and hiring guides. People feel that they’re benefitting from the work that’s being done.”

In the Bahamas as well as the other countries, the long-term success of bird-based tourism depends on how well the strategies deployed during this pilot phase can be integrated into a systemic approach to addressing sustainable development issues for communities in and near important and vulnerable ecosystems.

The pilot initiative represents the beginning of a more robust niche bird-tourism sector that can help build and sustain conservation efforts, and align those efforts with socioeconomic development to support and build more resilient local economies. Already this effort has been replicated in an additional area in Guatemala through the support of the Japan International Corporation Agency, and has launched off as part of a national tourism agenda in Colombia through the support of USAID and the Colombian government. In Colombia, the project has been completed in the Caribbean region of the country, where they trained 43 local guides, and is being scaled up to other regions throughout the bird-rich country.

The project fits well within the IDB’s strategy to leverage the value of natural capital in ways that generate income and thus drive local populations to both use and preserve their natural assets. As one of the IDB’s first projects approved in this area, its lessons have been particularly useful in the development of knowledge in this area, and in the design of new projects. Past experiences have shown that some natural assets, such as timber and agricultural products, are easy to value. This project demonstrated that in the case of more abstract assets, like the biodiversity that birds represent, it is vital that we explain the interlinkages between natural assets, ancillary businesses, conservation, and markets. As countries move forward to implement their commitments under the Paris Accord, these kinds of private-sector led models will become increasingly mechanisms to leverage funds to landscape preservation and restoration.

This article was previously published on the MIFI website

Gregory Watson leads the IDB’s Natural Capital Lab program, funded by the governments of France and the United Kingdom. It works with the IDB Group and partners to drive innovation in natural capital finance and promote biodiversity mainstreaming. ​It incubates, accelerates, and scales new solutions to pressing environmental problems by looking at nature as an asset. Previously, Greg worked in the IDB Lab where he led the IDB’s first equity investment in oceans, an equity investment in a Macauba silvopastoral system, developed the first Habitat Bank in LAC, supported an asset class for natural capital trading, and structured a $20M Green Climate Fund investment project for forests. He also created the EcoMicro green microfinance program, conceptualized the Climatescope, and designed the first private sector FIP project in the world, in Mexico. Mr. Watson has a master’s degree from the Fletcher School of Law and Diplomacy and a bachelor’s from Tufts University.