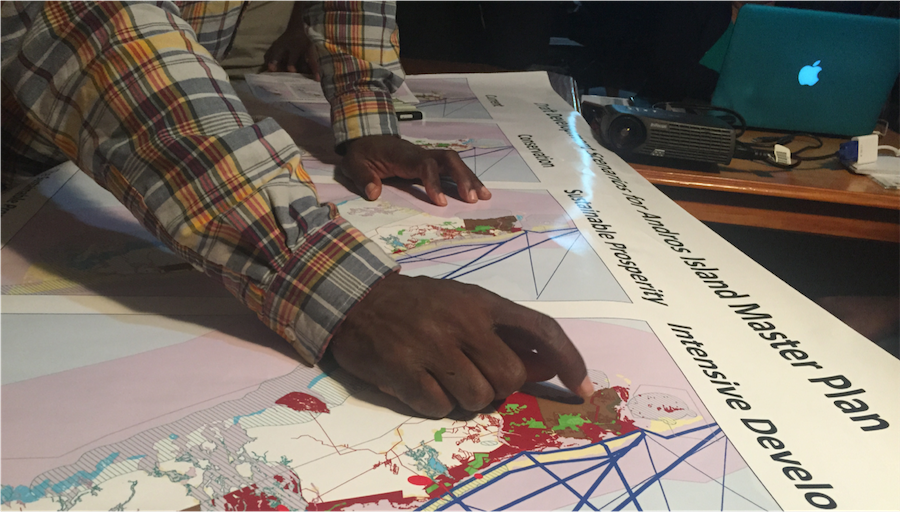 What’s the Key to Successful Sustainable Development Planning? We need local people to be involved in solving the world’s most pressing issues

These concerns were central themes at the Inter-American Development Bank’s annual meeting in The Bahamas, which I attended as a guest speaker last month, participating in a panel about using natural solutions to address sea-level rise, water stress, and other climate threats in development planning.

The importance of engaging local voices in solving these challenges was a message that pervaded the meeting, attended by over 700 country representatives, bank shareholders, private sector, and NGO leaders. Recent research has also shown that engaging people—thus improving the transparency and legitimacy of any political process—is the most important factor in whether science-based policies are actually implemented. Engagement was even more important than the quality of the science in predicting which policies would be enacted.

At the meeting in Nassau, I was especially impressed by one of my co-panelists, Ilya Espino de Marotta, executive vice president of the Panama Canal’s expansion project. She has been working for a decade to ensure that the expansion—scheduled to open June 26 this year—benefits global commerce while sustaining the economy, ecosystems, and the people of the region. The expansion will allow passage of ships carrying three times as many containers as those currently able to use the canal. A massive infrastructure project such as this requires serious planning—economic feasibility, market demand, environmental impacts, and detailed technical engineering studies.

Ilya also spoke about how the design of the expansion could lead to additional benefits—or costs—to local people.  “I think when you embark on a big project, even if it doesn’t look like an environmental project, you need to look at all the aspects of it,” she said. “Not just the finance and the engineering, but also, what else good can come out of it for all the people?”

The Panama Canal is dependent on the environment in the sense that most of the water needed to operate the locks originates in surrounding tropical forests. The forest helps store and slowly release water, preventing water shortages, flooding, and erosion that can seriously interfere with canal operations. Awareness of the canal’s dependency on natural capital has directly encouraged forest conservation in the region. Yet the expansion has also required some trees to be cut, so project planners have sought to offset this impact through restoration.

Ilya emphasized how important it was to talk to all kinds of people—from expert researchers to local community leaders—to make sure the expansion project is carried out in ways that benefit diverse groups. For example, they chose to plant native flowering trees, adapted to the soils and terrain, to enhance the livelihoods of people who harvest and sell forest honey.

The same attention to the priorities of local communities is guiding sustainable development planning in The Bahamas, where NatCap is working with the Office of the Prime Minister, The Nature Conservancy, the College of The Bahamas, and local consultants under a grant from the Inter-American Development Bank.

Our pilot project on Andros Island, The Bahamas’ largest island, will serve as a model for a larger national development plan to be initiated later this year.

The central challenge confronting the government of The Bahamas is to design a sustainable development plan that will harness the island’s wealth of natural assets without sacrificing the very ecosystems that underlie its economy and sustain the well-being of its citizens.

In many spatial planning processes, there is a flurry of activity at the outset to amass data without a clear idea about how information will be used to inform decisions. This can be time consuming and not particularly useful. Instead, the NatCap team in The Bahamas began by first systematically asking Andros residents what they care about most for their future. We also asked people to articulate critical impediments to improved wellbeing in their communities.

The Androsians are clear: they want better access to health care and education, livelihood opportunities, climate resilience, food and water security, and land-, water-, and air-based infrastructure to support the transportation of people and goods between islands.

On one of our trips, we got a first-hand lesson on the importance of reliable transportation infrastructure. We spread out across Andros to gather information from people in different parts of the island. The group that went north nearly missed their flight back to Nassau when their van got a flat tire from hard traveling on pot-holed roads. This is the kind of daily frustration, expense, and stress that Androsians have to deal with, and that hinders their ability to get to work and goods to market, visit friends and family, and develop new tourism-based livelihoods.

There is always a concern that development improvements in one sector could harm another, but through planning, we are highlighting where to site roads so they’re less likely to erode in storms. We’re also showing where to build so that construction won’t damage the shallow flats which are key sport fishing areas, or undermine protective coastal habitats.

Local people tend to know what they want for their futures, but they often do not have the tools to work together and get there. The Bahamas brought NatCap in to their sustainable development process to provide a science-based natural capital approach that:

This approach allows people to deepen their understanding of how their livelihoods are dependent on nature. The result is greater clarity for locals and their government about where trade-offs occur during development. This approach also helps people form a shared vision for how to balance diverse needs.

From the Panama Canal to The Bahamas and many other places around the world, I’m seeing significant efforts to engage people in designing sustainable development plans. By enlisting the ideas and energy of people affected by development, we create lifelong advocates, allies, and actors who will ensure plans are realized for healthier, more just, and sustainable societies.

This article was originally published on Natural Capital Project